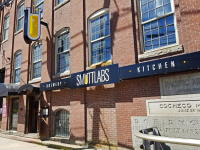 Notes: Debuting mid-fall 2019 in downtown Dover, this the first physical outpost for the limited-batch, experimental arm of Smuttynose Brewing, showcasing new and unique craft beers through an ever-evolving 16-tap tower. The full scratch menu is the brainchild of beloved, local chef Anthony Ricco, who artfully utilizes Smuttynose beer in many of the recipes.
BEER STATS

I visited during a week day when it was very quiet. About 11 beers on tap, all Smuttlabs, the vast majority brewed on site. Service was very good. I got a sample of four beers, served in 125ml beakers. I did think the flight was a bit pricy at $12.

I expected a bit more of a beer geek focus, with the lab idea, including more detailed descriptions (IBUs, SRM). I also got the impression my server was not that beer savvy mainly because the flight was served in random order (by menu number) even thought it included a very lite sour and a double IPA. I also did notice all the beers in the flight were under carbonated, likely a tap issue, which should be easy to observe.

I was very impressed that they had decent beers, but I would recommend that the servers and bar staff get more education to enable them to be effective, if Smuttynose expects this to provide feedback for their beer creations. Decent visit.

Smuttlabs Brewery & Kitchen in Dover, NH
Brewery rating: 0 out of 5 with 0 ratings