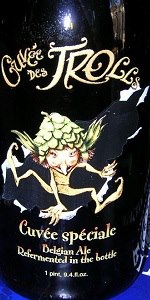 Notes: The Cuvée des Trolls was created in 2000 in the tanks of microbrewery Le Brasse-Temps, which was established in Louvain-la-Neuve by Brasserie Dubuisson.

It is an unfiltered blonde beer with a natural cloud. The beer is produced using only yeast, malt, hops, sugar and water and has an alcohol volume of 7%.

Thanks to the addition of dried orange peel during the boiling process, the beer has very pleasant fruity aromas that are in beautiful harmony with its delicate, fully rounded taste.

Hazy light golden with nary a foam cap to be found. Aroma of yeasty pepper, orange, coriander and wheat. Flavor tends toward wheat even more with the same accompaniments from the nose. Finish is kind of nice, more balance with a touch of sweet and fairly clean. Maybe a bit boring overall.

Poured gently into a Ommegang glass. A Hazy, slightly white hue for color. Dense, towering foam monolith rises from the white-gold liquid.
Peppery, herbal and wheat aroma. Nice, herbal funk with plenty of varied yeast effects.
A very light, hate to say....watery flavor. An herbal, dry, grassy kick after, but still kinda subdued. Tastes of a light farmhouse, more for a session than for sipping. However, the abv. Is 7.5. So, a short session if you're rating beers.
A pool-side, easy drinker, very refreshing in feel and flavor. Just lacking a bit in complexity.
Very light in hop charechter, sits in the backseat with the yeast and li g t malt driVing the bus.

Appearance - Slightly hazy golden yellow colour with a large size fizzy white coloured head. There is a very high amount of carbonation showing and there is some decent lacing. The head lasted for around 4-5 minutes.

Taste & Mouth - There is an above average amount of carbonation and I can taste breads/grains mixed with some lemon and some clove/coriander. There is also some hop and corn flavours. It ends with a nice balanced bittersweet aftertaste.

Overall - A well crafted delicious very drinkable beer. Had my bottle while sitting on a patio on a warm evening and it was perfect. I haven't tried the non special edition of the beer, so I don't know how much better it is.. but this is a winner for me.

Pours a cloudy pale yellow with lively carbonation leaving a thick white collar. Smells of lemon and white pepper. Very lively and effervescent. A touch of grass and spiciness in the nose as well.

The taste is similar, but a bit more muted. The lemon picked up in the nose is imagined at best on the palate. The flavor begins with candied sugar and gives way to a peppery and spicy hop finish. Very dry and snap quick finish. Would make for a very versatile pairing with food, but lacks depth and complexity. It is thought to judge the balance between well executed simplicity and complexity found in other beers.

A smooth Belgian ale with stronger lemon tones than others, though not so much that it hijacks the experience. Nice even profile with fairly even consistency. I mean, it's an "okay" ale for an anniversary release, but not something that's really blowing me away. Very nice drinker though. Smooth.

A-Pours a cloudy straw yellow/golden body with a small 1.5-finger head that, while a small for the style, lasted for a long time.

S- Yeasty, grassy, some spicy hop notes, a little sweet, maybe some green apple as well. A little horse blanket and slight funk. Not too much really stands out, and while nice, nothing special.

T- Slight green apple, yeasty, bready, some more spicy hops, a little peppery. Some bubblegum sweetness. Again, while not bad, but it really leaves you waiting for more but it never comes out. Pretty bland. A little woody towards the end.

MF- Moderate bodied with a lot of carbonation, but not too much. Carbonation makes it feel a little lighter on the tongue when you first take a sip.

750mL corked and caged bottle into a Mikkeller tulip glass.

A: Pours a light golden / orange, with an effervescent, white head - about two fingers; no lace.

M: Light-bodied and champagne like; tingly and zingy; nice.

O: Not too exciting; good, but kind of a blend between a Belgian Pale Ale and a witbier.

A: Pours a hazy gold with a tight, clinging white head.

S: Aromas of orchard fruits, citrus, and grass are present on the nose. Of the ales produced by Dubuisson, this one has by far the mildest smell.

T: Notes of green apple, spiced pear, lemon, lime, grass, herbs, biscuits, nougat, and roasted almonds make their way across the palate. The finish is balanced with an even mix of biscuity, nutty malt and grassy, herbal hop flavors.

M: Medium bodied, very dry, and prickly. Though it is initially lively, this beer quickly wilts in the mouth. Overall, it feels rather thin and watery.

O: This beer is solid as is, but would be greatly improved by a heftier, thicker mouthfeel. It simply doesn't have the feel of a bottle conditioned strong ale. In the end, I'm glad I tried this one, but would not likely purchase it again. I just don't see it as being a significant improvement over the regular Cuvee des Trolls.

Best before end 2013 - poured from a caged-and-corked 750mL bottle into my Troubadour tulip.

Gentle yeast-based flavors accompanied by star fruit, melon, and lemon notes. Well integrated and light profile overall. Finishes medium-dry with a touch of candi sugar. Delicate and refreshing (though I could see how some might call it weak).

Usually anniversary editions pile on the flavor, but this seems to emphasize the lighter qualities of the original recipe...not sure I could distinguish between the two really...still quite tasty none the less.

I had no idea Cuvee des Trolls was 10 years old. I had never heard of it, until kegs were offered a couple of years ago. Those Belgians and their love of little people. The gnomes of Brasserie d'achouffe, the "erthels" of Urthel, and one of the most famous cartoon character out of Belgium, Peyo's Smurfs.

To get myself in the proper mood, I put on a movie. Not "Troll 2", that's about goblins, no matter what the director will tell you. I'd never seen the original "Troll" from 1986, but what a delight. Swinging Sonny Bono, lovely June Lockhart, a surprisingly non-wooden Michael Moriarty, and an evil Troll trying to turn an apartment building into a fantasy forest /alternate dimension. He just about turns every tenant into a horrible rubbery creature, except Julia Louis Dreyfus, who becomes a scantily clad wood nymph, which is how it should be, of course.

Cuvee' des Trolls Cuve'e Speciale, Belgian Ale Refermented in the bottle. I pint, 9.4 fl. oz. , 10th Anniversary Cuvee Speciale, Product of Belgium, 7% Alc., by Vol.
From Brasserie Dubuisson, makers of the Bush/Scaldis line. I like them.
Brewed in limited quantities, Troll's 10th Anniversary special edition accentuates the delicate qualities and fruity aroma of Cuvee des Trolls thanks to it's secondary fermentation in the bottle. Enjoy!
Brewed with: water, malt, sugar, hops, and yeast.

Now, let's taste it: light, spritzy, carbonated, lemon and orange, yeasty. Mmm. Now, how is this different from regular Trolls? I can't think of it. I don't have a regular Trolls next to me to compare to it. But, what can I say, it's Mmmm, mmm.
So good. A little sharp, a little smooth, a bit creamy, and altogether mmmm.
Another gulp, another sip, and it's more mmm, yeah.

Again, I can't say there's anything better than the regular Trolls, and I tried it for the first time two years ago….more yeast, more smooth, more creamy, more Mmmm.

Light bodied, light textured, fluffy mouthfeel…mmm, and yum, I just keep saying'…cream and orange, lemon and yum, not too this, not too that, just altogether ahhh….

750ml-&gt;Unibroue Tulip
A ~ Opens with a contained POP revealing a cork adorned with hops. Pours a translucent bronze with a sunset hue. Fantastic head that never quits, but fades into a creamy cap on top.

A slight bit hoppier taste, and the fruitiness is toned down. The malt profile is noticeably more bready and yeasty. Smooth brew, a bit thicker and all-in-all a more drinkable product (even in a 750ml bottle).