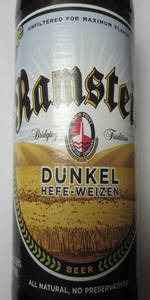 Poured into weizen glass. It pours a dark cola-brown with a one-finger, ecru-colored head and lacing. It smells of roasted malt, tobacco, and banana. The taste features lemon, banana, hops, cloves, and a hint of caramel. This bier is medium-bodied and heavily carbonated but with an ABV of only 5.5%, it is very easy drinking. Overall, it is a nice interpretation of this style. It's not at the level of Weihanstephaner Hefeweissbier but it's pleasant and nice to drink.

Light brown in color and cloudy with a beige head. Good retention. A lot of roasted malt in the aroma. Some caramel as well. Light fruitiness to go along with mild noble hops. The balance in the flavor is towards the malt as well. Medium bodied and easy to drink. Maybe a little more fruit from the yeast would round this out and improve it, but not much else to find fault with. An enjoyable, non-intrusive dunkelweizen.

12 oz. bottle. Quite dark and opaque, aggressively carbonated. 3+ fingers of foam with nice head retention and lacing. Nice interplay of roasted malt character and traditional hefeweizen character on the nose. Cocoa-like roast malt is dominant, while the yeasty phenols take a back seat.

Roasted malt again comes to the forefront on the palate. Overly fizzy and aggressive carbonation holds this back from being great. Otherwise, this is a very good dunkelweizen.

A - Dark borwn pour with no lacing, but visible carbonation. Foam pours high and settles fast.

S - Scents of bubblegum, licorice, and a smoky smell comes from this beer. Pleastly surprised with the complexity of this beer.

T - Some dry hops and a cloying spicy bite are noted. Sweetness is on the back end along with some banana and clove notes typical of a hefeweisen.

M - Really wish the carbonation was toned down a bit. Its simply too much. Beyond that this beer leaves a spicy bite in the finish and feels fairly light.

O - This is a nice beer. If it wasn't so "bubbly" I'd dare say its one of the best domestic dunkels out there. I've had the maibock from Ramstein as well and I would try this and other offerings if I get the chance.

12oz bottle poured into a weizen glass
A: Dark brown with a one-finger head that settles to a lingering lacing
S: Roasted malts with hints of coffee, burnt popcorn and earth
T: Overall this tastes like toast along with a solid dose of caramalized bananas & a hint of well-browned marshmallows. Intriguing but not particularly balanced/connected
M: Medium-bodied, a bit of roast, cream & carbonation
O: Overall it's tasty and doesn't have any distinct flaws, yet it lacks typicity and a sense of direction

12 ounce bottle with best before dating notched onto the side of the label.

Nose of some rum and bananas.

On the palate I get more bananas, dark malts, some light smokyness, and drying hops. Long and tasty finish. Flavorful, quality creation from Ramstein. They put out high quality brews and this one is no different. Worth seeking out and enjoying.

This is my third Dunkel of the evening and it is the best. I have had a good experience in the past with Highpoint on tap. The look and smell is point on for the style and and it is comparable to many of the best in class. A good brewer of Germanic styles, Highpoint is a respectable entrant.

Poured into a weizen glass. Black in color with a white head that settles into a thin lacing. I have never seen a black dunkelweizen before. Is this a stout?

Roasted malt nose with a bit of spiciness. Interesting

More roasted malts. Notes of chocolate. Little to no wheat flavor and plenty of banana and clove like yeast flavor. The body is a bit watery. Nothing like a german style dunkel.

This isnt a bad beer necessarily but its a bad dunkelweizen. Label this a schwartzbier or something and i mightve graded this higher. Needs less roasted malt and more wheat. Good yeast strain though.

Picked this up down at Total Wine in West Orange, having never seen or tried this before. I hadn't had a High Point offering in quite some time but they were some of my favorite unfiltered beers so when I saw this, I was eager to give it a try. While this wasn't as full as I expected, this is a decent example of the style and a relatively accessible beer for those not accustomed to Dunkelweizens.

The pour to this was a nice dark brown and pretty cloudy, with not a lot of head to be seen. The banana and wheat that characterizes so many of the High Point beers was found in the aroma here too and the taste kept some of those notes, with just a hint of pumpernickel and bready malt thrown in. The one drawback to this is that this beer has a bit of an appearance and mouthfeel of soda - light to the taste and similar in carbonation. I know that this style isn't particularly heavy but the aftertaste was mostly that of bubbles, and not of the wheat or malt. I did expect just a bit more from this, given that High Points flavor is quite distinctive.

That being said, the alcohol is light enough that one could enjoy a few of these in a session and not feel overwhelmed. The other High Point beers keep this beer's profile and offer more but this isn't a disappointment by any stretch. A bit more caramel stickness and dark spice could have made this great but this stands just fine as is.