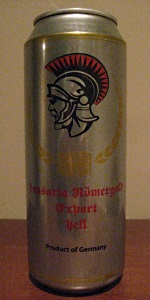 Appearance: Clear straw-colored body, with just a slight presence of haze. Massive, rocky, dense and somewhat coarse head persists very well. The lacing is fairly thick and fine-beaded, in a largely unbroken sheet. the carbonation is profuse, slow-rising and finely-beaded.

Aroma: Rustic white bread and grassy hops dominate the aroma. There are also slight notes of white pepper and a bit of earthy yeast.

Taste: Opens with bready and grainy flavors, somewhat like that of wheat porridge and a slight, but persistent wave of white pepper that carries throughout the taste. Late in the taste, some mild herbal hops present. Finishes with a quite mild, but lingering presence of pepper and mildly bitter hops.

Mouth feel: Soft and full, with a very slight zest.

Drinkability/notes: Understated, but very drinkable, would pair well with a variety of dishes.

$ 2.50 (Including tax)/500 mL can ($0.148/oz) from Costco, Schertz, TX. Part of the Costco 2019 Advent Calendar. Reviewed 11/07/19.
Can dated “EXP 05/2021”. Stored on the shelf at the store, stored at home at 42 degrees and served at 50 degrees in, lacking a pilsner/pokal, a hand washed and dried weizen glass.
Appearance – 4.
First pour – Gold, clear.
Body – Gold, clear.
Head – Large (Maximum twenty cm, stabilizing at ten, aggressive center pour), Gold-tinted white, medium density, average retention, eventually diminishing to a ten to twenty mm crown and complete cap. Large irregular three-dimensional pieces of tiny to small-bubbled lacing remain hanging on the glass as the head recedes.
Lacing – Excellent. Wide irregular three-dimensional bands of tiny to small bubbles with a few stalactites. See above.
Aroma – 3 – Weak malt, no hops, no yeast.
Flavor – 3 – Begins and ends slightly sweet and malty but does not taste like caramel. No hops. No yeasty elements. No alcohol (5.0 % ABV as marked on the can) flavor or aroma, no diacetyl, no dimethylsulfide.
Palate – 3.25 – Medium, almost syrupy, soft carbonation.
Final impression and summation: 3. Meets the parameters for a European Export/Helles beer with a pleasing gold coloration.

Malty and generic. Doesn't taste fresh. Lacks depth of flavour. I'm not very keen on it.

A bit drier than I like. Some fruity almost champagne-like aroma.

This beer pours a clear, bright medium golden yellow colour, with three fat-ass fingers of puffy, loosely foamy, and bubbly off-white head, which leaves some splotchy treeline lace around the glass as it evenly subsides.

The carbonation is quite hard to really track down, what with its barely perceptible base frothiness, the body a solid middleweight, and mostly smooth, just a wee phenolic gasohol thing maybe tripping up my various palates. It finishes off-dry, the malt doing well to keep 'er tuned up, while the ancillary players start to wane.

Overall, a decent, if not particularly memorable version of this venerable (aren't they all, though?) German style. Simple, inoffensive, and generally well-made - easy to put back as a sort of soul cleanser amongst all the headier food and, yes, drink, so abundant right now.

Very Lite beer but I just had a root canal about 3 hours ago. Prost!

Appearance: Clear golden body with some visible carbonation topped by a small white head. Only a little sticky white lacing is left on the glass.

Aroma: mild mix of malts and hops, with slight dominance by the spicy hops. Lightly sweet up front but mild bitterness by the aftertaste. Hints of baked bread. Light hops add grassy and herbal notes a well as some faint spicing.