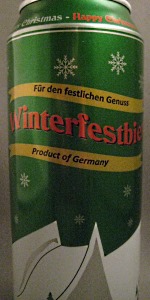 Appearance: Reddish-amber body, with just a touch of haze, crowned by a large coarse white head, with good retention. Fine streams of minute bubbles drift lazily to the surface, as well as the occasional fast-rising fat bubble. Chunky patches of lacing adorn the glass walls.

Aroma: Rich aroma of sweet caramel, some toasted dark bread, and floral and grassy hops. No hint of alcohol, as expected with an ABV of 5.5%.

Taste: Op tasting, there is a wave of toasted malt, rather like toasted dark bread, a little caramel, and some pleasant grassy hops. The caramel and a bit of toffee carry throughout the taste. Later in the taste, the hops dominate, offering a little leafy and tea-like bitterness. No presence of alcohol is notable in the taste.

Drinkability/notes: A well-crafted and drinkable example of the style. I would be pleased to have this again.

Presentation: Packaged in a 500 ml, 16.9 ounce aluminum can, served in a Duvel tulip. Expiration date on the bottom of the can is 05/2021. Possibly the best of the Costco Advent Beer Calendar examples, though not a style I would associate with winter or Christmas. Still, it is good on its own merits.

$ 2.50 (Including tax)/500 mL can ($0.148/oz) from Costco, Schertz, TX. Part of the Costco 2019 Advent Calendar. Reviewed 11/16/19.
Can dated “EXP 05/2021”. Stored on the shelf at the store, stored at home at 42 degrees and served at 54 degrees in a hand washed and dried 0.5L stein.
Appearance – 3.75.
First pour – Light amber, clear.
Body – Medium amber, clear.
Head – Large (Maximum 11 cm, stabilizing at four cm, aggressive center pour), off white, high density with some small rocks, good retention, diminishing to an eight to twelve mm crown and a complete cap.
Lacing – Fair. Partial rings of tiny to small bubbles
Aroma – 3.25 – Untoasted malt with a bit of caramel.
Flavor – 3.5 – Begins faintly bitter followed by a touch of caramel. Ends moderately hoppy and bitter with no caramel. No alcohol (5.5 % ABV as marked on the can) flavor or aroma, no diacetyl, no dimethylsulfide.
Palate – 3 – Medium, watery, soft carbonation.
Final impression and summation: 3.5 Good looking beer despite the scant lacing. The aroma is a bit weak but otherwise OK. Flavor is decent. Overall, very drinkable.

CAN: Green and white label. 500ml pull-tab. Exp 05/2021 (seems ambitious). Acquired as part of Costco Wholesale's 2019 Beer Advent Calendar "variety" pack...so much for variety, the pack is all Egerer.

AROMA: Pleasant malt sweetness...pale malt, 2-row, hints of toasted bread. No real amber malt (i.e. Vienna/Munich). Has a floral hop profile but not a grassy one...Noble hops are not indicated. Seems slightly bready, but not crazily so like some very filling festbiere.

Aromatic intensity is average. Suggests a simplistic festbier lacking Noble hop character but bringing the fundaments of the style.

TASTE: Bready, finishing a bit dry and rough with notes of unwelcome minerals and a metallic off-flavour. Pale malt sweetness/2-row is present throughout but not the rich toasty notes you'd want in the style nor any Noble hop flavours. A hint of floral hop presence.

Very simplistic...rudimentary, even. Shallow and tired. I'd bet this was old, but then I'm drinking it before its expiration and 2 months before the event the pack it was included in was packaged exclusively for, so obviously the brewers approved of its freshness when they shipped it...

TEXTURE: Oddly unrefreshing for a festbier...it's tough to imagine downing this by the litrekrug paired with a pretzel at a beer festival - and that's the point of the style, isn't it? Strangely dry and coarse particularly on the finish; it ought to be the opposite. Medium-boded.

Poorly executed across the board, but at least it's adequately carbonated.

OVERALL: A sad stab at a festbier and a damned embarrassment to its country of origin. Very forgettable lacklustre fare...one of the poorer festbiere I've tried this season and I've had quite a few subpar American brewed attempts at the style.

As an aside, there ain't nothing wintry about it...

Served in a small snifter glass from the can.

Appearance: Transparent darker gold color with medium bubbles. White head rose maybe quarter of an inch off the body. No stickiness on the glass.

Taste: Smooth creamy, has a malt touch to the body with light bitterness.

Mouth: light to Medium stickiness. Carbonation full at first but flattens a bit with a medium body.

Overall: Descent brew, used half the can to smoke wood chips and the other half to drink. Nothing is wasted. Enjoy, always in a glass..Salud.

Taste: Purchased as part of the 2016 beer advent calander. Like every single beer in the pack, this one is nearly a year old and as a result - is quite lacking and dull.

Has a dirty metalic taste of rusty water and corn. Green apples. Mild yeastyness. Bland. You can tell this beer is old and well past its prime.

Overall: Nasty. This was probably good when it was fresh but after a year in the can, this beer is quite dead.

Little or no carbonation following a uninspired pour with minimal head and lacing. Something of a orange gold hue. No discernable tone in the aroma, somewhat flat, which can also be used for the taste. Not horrible, just meh. More flavor than a Coors or Bud, but lacking for a Marzen. Slight metallic bitterness in the aftertaste. I will not seek this out in the future.

It's Christmas Eve Eve, and here I am drinking a Märzen. Oh, the beer is called Winterfesbier and says "Merry Christmas" around the rim, but this is unquestionably a Märzen. It's a ridiculous beer for the time and there are far too many in this pack. I'm going to try and prevent my annoyance from negatively affecting my review, but it is hard to ignore how out of place this beer feels.

Winterfestbier poured with a pitiful amount of head for a beer purporting to be season-appropriate. The head was short-lived as well, but it at least left some nice lacing on the glass. The beer is clear and pale, exactly the opposite of anything expected from a "winter" beer. It's a yellowish gold color with the tiniest hint of amber, 6-8 on the SRM scale.

Like most of the Märzen's in this calendar, Winterfestbier has light aromas mostly of the malt. The slightest hint of some hop floralness my be present. The flavor is malt forward as well- there is an immediate grainy, bready flavor, followed by a smaller wave of sweetness and then finished by a yet smaller wave of hop bitterness. There is not much nuance, but it isn't bad in terms of a Märzen.

Winterfestbier is a stupidly and misleadingly named beer. There is nothing about it, from the color to the smell to the ABV and the flavor, that suggests it as a winter-appropriate beer. If the Germans are actually drinking this for Christmas, I'm sorry but they are doing it wrong. It's a decent enough Märzen, but it doesn't stand out from the other 300 in this 24 pack.

From the can, it pours a clear amber with a modest head, diminishing to a thin layer. A bit of malt in the nose. The same for the mouth. Acceptable. This year, it has only 5.1% alcohol.

This beer pours a clear, medium copper amber colour, with three fingers of puffy, loosely foamy, and sudsy ecru head, which leaves some decent layered tabletop cloud lace around the glass as it slowly and evenly recedes.

The carbonation is quite low and hard to really round up an example of its wan frothiness, the body on the light side of an average middleweight, and generally smooth, all that malt just gliding by as if on rails. It finishes well off-dry, that toasted bready and biscuity character showing a hint of true staying power.

Overall, not a bad brew, tasty and well-flavoured, though it could do with some additional hop off-set, but perhaps that's the point here in the naming convention - ya know, 'winter' beers being all about malt and spice and fruit, and all that? A flimsy premise, to be sure, but otherwise, why have an Oktoberfest in December?

This is not a "winter beer", except maybe in Germany, but instead an unspiced, normal ABV (5.5%), marzen.

Aroma: malts and caramel with only a faint sign of hops.

Flavor: Moderately malty and lightly hoppy, but markedly more hoppy than the aroma suggests. Lightly sweet up front with a very mildly bitter aftertaste. Hints of caramel vanilla and light brown sugar, with a solid base of bread.

Medium body and medium+ carbonation with a touch of dryness in the finish.

16 fl oz. can, canned 07/06/2015 EXP 09/01/2016. A bit of a mystery beer to me, it has no real information regarding the beer itself or the brewers on the can. Acquired a single can of this stuff as part of a mixed six pack at the local Binny's. Brewed by Privatbrauerei Egerer according to the can. Product of Germany, with some more text written in German on the can.

A - Pours a coppery amber orange body, semi-clear, but hazed with some light chunks of sediment. About a finger of frothy white head that fades to a soapy skimming and leaves good spotty lacing behind. Looks good for what it is, but not unique or special.

T - Malt bomb to be sure. A bit of sticky medicinal sweetness on the palate. Almost enters American malt liquor territory at times in terms of maltiness & sweetness. A bit too sweet at times.

M - Medium-heavy in body, semi-full, moderate thickness. A bit syrupy. Fluid, but not quenching or refreshing.

Overall, I had high hopes for this one, but it fell a bit short. Mostly a sweetened syrupy malt bomb that approaches American malt liquor territory at times. Recommended holiday drinking though, for fans of the style in particular.