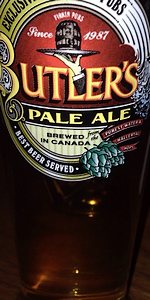 it continues to blow my mind how many beers all taste the same across ontario. it seems like there are countless yellow adjuncty beers around, some claiming to be organic, others pilseners, but really they are all the same yellow water, some moderately better than others, and for me, this house beer at the firkin bars (awesome tap handle by the way) is near the bottom of the list. its hardly a pale ale, im not sure why they call it that, it drinks like a corn lager, fizzy and yellow and redeeming only really for its coldness and high carbonation. i do like that it has a little bit of body, but this at once tastes a little stale and metallic to me, cheap, but i still drink it, its not so bad it needs to be poured out, but it certainly doesnt jump ahead at all in the crowded style. they serve up some greasy spoon options on the menu in these places, and this might have some value is a very affordable palate cleanser, but as a drinking beer, it did very little for me. the firkin spots have a lot of good beers to chose from, it seems weird that their house beer wouldnt be one of them...

Had this beer on tap at the Firkin in Toronto, their house beer/ale. Served in logoed pint glass.
Clear, yellow gold body with a thin white head, minimal retention or lace.
Grainy sweetish smell, touch of floral hops.
Taste is more grainy malt, a bit grassy, balanced out with a little hoppiness at the end.
Light body and mouth feel, easy to drink.
Nothing spectacular, but hit the spot with dinner.

I should have known instantly when the server mentioned this was "a pale ale, you know, like Keith's" - but tried it anyway based solely on the fact it came from (what I presume to be) a small brewery in Niagara. Almost the epitome of a lager, I can't fathom how it's classed as an ale, let alone a pale one!?

Light golden colour with decent white head that remained present throughout the pint. No aroma other than faint grains. Crisp and clean taste with no hint of hops, but a dry finish.

Have certainly had worse beers i.e. adjunct/corn filled, but anyone looking for "a pale ale" will be disappointed.

Had this beer on tap at the Cask and Firkin in Toronto. Served on tap. In a pint glass. Cool.

D-Very nice and drinkable. I would drink this beer again.

Had this on tap recently at a Frikin in Niagara Falls.

Aside from the appearance and mouthfeel, this beer did not even remotely resemble a pale ale. The nose had light bready malt notes and no hops whatsoever. The palate followed the nose with no discernible hops and avery light bready malt profile. Very disappointing. They might as well have called this one a stout.

S- Very little detectable smell; what smell there is is very fruity, apples and pares come to mind.

D- Not the best, but only available at the firkin pubs so worth a try if you're ever at one.

I had this in one of the Firkin pubs in Toronto. There wasn't much appealing on the tap list, so I thought I'd give this a try.

Pours a dark fizzy yellow I guess. A very small head with very minimal lacing. I could smell little bit of hops. The taste is almost like a macro, but with a bit more hops. It is a very mild flavour, but there was nothing offensive or bad about it. Clearly this is below average for pale ales, but I would drink it again given the same tap list. I actually did like this enough to order a 2nd pint (the other beers still did not appeal to me enough).

Had this at the Swan & Firkin - was drawn in by the promise of Hallertau Hops. I should have been tipped off when the waitress said it was like Keith's, which is definitely not a good sign.

A - Didn't look too bad - some nice white head that dissipated really quickly to a total absence of lacing. Weak transparent yellowish color with visible carbonation, but otherwise looked like it could have been a decent brew.

S - This is when I knew something was wrong - not much of a smell other than that metallic macro smell and corn. It didn't smell awful, just weak and definitely not hoppy.

T - Started off not tasting like much, but as it warmed up it became a chore. The last few sips were pure macro piss-water. There was maybe the faintest bit of hops - just like Keith's.

M - Mouthfeel actually wasn't bad. It was the right density for a pale ale, and was largely inoffensive. Carbonation wasn't over the top either, so I didn't feel overly bloated.

D - When it was cold it drank all right, but I can't imagine why you'd want to have one (or potentially more).

Not awful, but really underwhelming - the Rickard's White I had afterward, while not great, was significantly better. Stay away from the Firkin house brew...

Description on their pint glass: a pale ale made with hallertau hops

The colour and appearance is too pale to be a pale ale. In some ways, it looks like a cold pilsner with a weak half inch head. The smell is of a minimal seaweed nature.

I ordered something else afterwards. I could have gotten a soda water before the next beer. This should have never been brewed in Canada.

Taste: Like a macro attempt at a pale ale (from a former micro that was bought out). Kind of like Keiths "IPA" (which isn't really an IPA). Dried apricot, bread. Balanced. Biscuit malt. A very mild and slightly bitter finish. Oh, I almost forgot to mention that it was very dry.

A light copper color with a bit of white head on top that dissolves fairly fast. Nose is light malt, maybe a touch of hops. Fairly bland, overall. Taste is likewise. There's grainy malt, and then some hops as well. Really blah. Feel is average (in keeping with everything else related to this beer), and carbonation is a touch high, but okay. Overall, this is one of the most bland, average beers I've ever had, but sadly one of the better Canadian beers I've been able to find. What's with Canada and not having more quality crafts? Weak, but drinkable.

This beer is specially brewed for the Firkin chain of pubs. Niagara also contract brews for Red Lobster, the Angel Inn in Niagara and I believe a place in Hamilton.

The beer is poured in its own tall slender mug with an over the top 'old English' graphic. The mug says its brewed with Hellartaus, which is unusual for an English Pale Ale.

Its a light gold color, like Keiths. The head is frothy and lasts longer that any Niagara beer Ive tried. Lacing coats 30% of the glass. The aroma is fruity with some orange marmalade and caramel. The taste is crisp and light with a bready malt base and a some pleasant fruity, earthy hop flavors. A bit of buttery diacytel lies in wait as does a bubblegum taste. The mouthfeel is light and busily carbonated. The finish is lightly bitter with some hop aroma and tartness.

This is a decent session beer, and was very quaffable on this brutally hot day. It seems to have less of the harsh yeast flavors that Ive noticed from this brewery. Worth a try if youre ever at a Firkin.


Butler's Pale Ale from Niagara Brewing Company
Beer rating: 73 out of 100 with 19 ratings