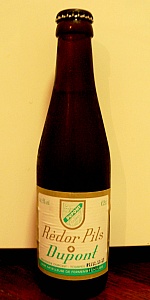 Rated by emerge077 from Illinois

Rated by Jugs_McGhee from Australia

A: The beer is a light gold color, with a short white head that fades slowly and leaves a thin lace on the glass.

T: The taste starts out bready with flavors of lager yeast and a light malt character. Then a good hops bitterness comes in along with some mild sweetness creating a good balance. The after-taste is slightly bready.

O: Tasty, goes down easily, not too filling, mild kick, good representation of style, this is a solid beer to drink for a while if you’re in the mood for the style.

Rated by tykechandler from Kentucky

Pours a clear orange-yellow with a foamy bone colored head that settles to a film on top of the beer. Foamy streaks of lace form around the glass on the drink down. Smell is of malt, fruits, and grassy aromas. Taste is much the same with a fruity flavor on the finish. There is a mild amount of hop bitterness on the palate with each sip. This beer has a lower level of carbonation with a slightly crisp mouthfeel. Overall, this is a pretty good beer that is drinkable but nothing too special.

Reviewed by cpetrone84 from Pennsylvania

3.77/5  rDev +4.4%
look: 3.5 | smell: 4 | taste: 3.5 | feel: 4 | overall: 4
Pour is a pale yellow and perfectly transparent with a tight pure white head. The nose is light but refrehing. Pilsner grain up front, a touch doughy, light spice with stale bread and a hint of lemon. Herbal hop behind. Taste is more grainy than the nose, the dough seems more toasted bread now mid palate, the finish is herbal and lightly bitter. The body is very light and refreshing with lower carbonation and a clean crisp finish. Easy drinking.
Jul 23, 2012

Reviewed by barleywinefiend from Washington

S: Pretty much some grass, grains and a whiff of biscuit

T: Some light biscuit, grass and a little bit of sweetness with a grain and booze combo on the finish. Not really, crisp or refreshing in my book

M: A bit more body than I want or expect, lowly carbonated pils leaves it feeling heavy to me

O: The body was a bit much, the booze was to as 6.2 is above the BJCP guidelines. Not bad, not great either.

Reviewed by eric5bellies from Australia

A - Pours a hazy straw colour with a pure White head that retains quite well and laces.

S - Bread and yeast aromas and some nice grassy hops

T - Up front some nice malty notes with bread and yeats dominant. The hop kick in mid palate and has a nice dry finish.

M - Light body with medium carbonation, with a crisp finish.

O - Felt more like a German Pils than a Czech Pils but nonetheless, its nice to see a Belgian brewery trying non-belgian styles. Recommended.

Reviewed by LittleCreature from Australia

Overall - 3.5
I'm not sure of the hop variety, but I'm more inclined to think of this as a north German style pils, rather than a Czech. It was very enjoyable straight out of the fridge, but after less than 10 minutes, the alcohol became very apparent and the balance (firmly towards the dry and bitter) became less pleasant. Still a good pils, but not as drinkable as the best.

Reviewed by impending from California

Aroma is fairly faint, hints of citrus and honey. Creates no expectation of the flavor.

Taste is all about the buttery smoothness, this is how to shape diacetyl. Surprising delicate fruitiness surrounds the heart, Julie Child would approve. Very mild bitter, zero dry. Light bodied. Evaporates from the tongue effortlessly, simply vanishes allowing it to pair well with food. refreshing

Nothing about this brew suggests Brasserie Dupont.
cheers
jd

Reviewed by glid02 from Georgia

Tastes similar to how it smells, though the diacetyl is a bit more prevalent. Smooth pilsner malts up front are joined quickly by buttery notes. Midway through the flavor profile turns more bitter with leafy hops that carry through to a mildly bitter ending. Mouthfeel is good, with prickly carbonation.

Overall I was expecting a crisper version of the style from such a great brewery, although to be fair that may not have been what they were trying to achieve. A decent enough beer, but not worth seeking.