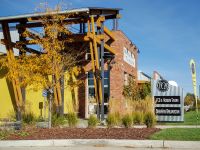 i have been meaning to check these guys out for awhile. i think they have a less stellar reputation than they should have, mostly because the beer that makes it to bottles i dont think is a representation of their best work. the specialty kegs and certainly some of the taproom exclusives are just great, so it was awesome to finally make it in. in a huge facility, recently renovated from what i understand. its brightly colored, its clean, its new feeling, its large for sure, patio, long bar, dining area, private event space, comfortable. the bartender was a bit odd, seemingly overwhelmed by a quiet bar, flustered, but friendly. they had a ton of beers on, several of which i had never seen or heard of before, great selection. i think the recent rebranding was a smart move for them. the beer was great, i liked the scarlett brett a lot, and the mexican chocolate cake stout was solid as well. it looks like they are doing a little more inventive stuff now than they have in the past and that will serve them well in the very savvy fort collins beer market. i had a great time here, and the food i had was killer too. i think its a matter of time before these guys are back on the map with the beer nerds. worth revisiting if its been awhile for you...

I didnt attend the restaurant, I instead went to the tap room to await the tour, there was a small bar with several bar tenders pouring beers, i strongly reccomend their Hoptastic the best beer i have had from them yet. The staff was knowledgable, when I was asking questions throughout the tour they were answered when i asked what kind of hops were in the Hoptastic they were able to answer me. Until i went to the brewary itself i had never been a huge fan, but now i cant wait to go back.

Cool brewery and taproom with some really nice beers. If it weren't in Fort Collins, it would probably seem more special. I like their beers much better than New Belgium, but it's tough to compete with Odell.

This is a very large facility. Big open areas with long tables. I like their system for samplers. I enjoyed trying quite a few beers that they do not bottle. I think they may be better than most of their bottled beers. The food was pretty tasty, too.

Beer was quite tasty. An administrator lady squared me away on the differences between two of the bottled beers sold up front, allowing me to make an intelligent choice (malt monster's Belgian style dubbel).

Bar staff was out of control and not especially helpful. My bartender was so involved with his conversation with the people at the end of the bar I couldn't get any help for at least 10 minutes, despite my empty glass being at the edge of the bar, ready for refilling. One dude tried to make up for the other's inattentiveness by actually completing my transaction (he did a pretty good job too). So overall not bad on the service, but it's more of a wash of extremes...

The session beer alone was worth the stop. Cheers for that one! Having a bottled stout now, not as impressed with that one, but overall the beer is pretty good.

Beautiful location and setting, minutes away from awesome parks and beautiful old town. I was there on a nice sunny 80 degree day and sat out on the patio.

The servers were very attentive and I received all of my beers immediately and a very reasonable wait for what turned out to be amazing food. My wife and I both enjoyed sandwiches that were made on some excellent very fresh different style foccia. The meat, the sauce the everything was spot on. The quality of every item showed through.

The beers were good and had the taste of very fresh hops. I'm not saying they're the best beers you will find in the area but they were very good and when you add in the great food and nice location I can't imagine why they aren't rated higher.

If you are in Ft. Collins, this is another place to try. Went here after NB and Odell's. A little smaller and the selection was not as big. Beer was good, but I have to admit I had a bit of a buzz by the time I arrived here after going to the other breweries. I would recommend stopping in for a pint or two.

We went to Fort Collins Brewery based on a local's recommendation and arrived just before a storm. It is right down the street from Odell's. There is fee parking in their lot.

There are two sections there: a restaurant called Gravity closer to the street and the tasting room. Since I was here to sample beers, we went to the tasting room. There was one couple at in a booth and someone talking to the bartender at the bar. Fairly slow. We got our beers and went outside to watch the storm roll in. There are three or four picnic tables there. I thought the bartender was "short" and my friend was less impressed. We talked to a couple guys outside and they were touring Ft. Collins breweries, too. One was a local and his friend was out of town They met at ASU. Small world!

I had their Black IPA. It's not my favorite but I wasn't in the mood to try another. The beers are $4 which is about the going rate; but for my money, I would go to New Belgium.

Overall, I'm a sorry we came here because we missed Funkworks and came here instead. Maybe the Gravity side was the right choice. Regardless, I am being generous in my rating this brewery this high.

Stopped by the brewery on the way home from a long road trip. It was a Monday evening, and not very crowded. Only one person working the bar. She was very helpful and knowledgeable about their beer selection. Tried a couple of their IPA's and a Barleywine. Overall, the beers were really good. Best part about the place was the artwork. The guy who has done all their labels is an amazing artist, and they have some really cool merchandise. Would definitely go back.

Only ever visited the taproom, not their pub, and review is reflective of that.

Small room with some bench seating also available outside. Not much life to the taproom on my visit, which was middle of the day, mid-week, but been there when its packed and it wasn't all that better. Not a huge fan of the FCB beers to be honest, but did enjoy what I tried on this visit. A solid selection, around 10 beers on tap. Solid service. Overall, not a bad place by any means but in a town with tons of breweries not one that stands out.

I'll admit that Fort Collins Brewing's old location had its charms. Off the beaten path, in a little industrial building, it was cool. But there's a new brewery there, so really nothing lost.

And Fort Collins' new, expanded location is quite the upgrade. A tap room with about the same number of seats I would think, but with and outdoor patio that faces west, giving some view of the foothills and the nice, warm sun in the afternoon. We get windows now, allowing you to see the brewery itself. And in my opinion, the best new addition is the restaurant that they opened, Gravity Ten Twenty. I'm not exaggerating that I think it's the best food in town. I've been there multiple times, had a few different plates, and they're all amazing. The service is fast and friendly, there's an even better view of Fort Collins' plant, and, of course, you can have their entire beer selection with your meal. Or you can just sit at the bar, your choice.

The tap room itself is a little more open than the old place and still has some of that machine aesthetic of the old place, though with more light and a warmer feel. The beers are still their usual mainstays like the 1900, Kidd Lager, Chocolate Stout, Z Lager, and Major Tom's. They always have their seasonals and specially brewed as well. It's a step from the old place and well within biking and walking distance of something like three other breweries, especially Odell. It's not the best in town, but still a good occasional trip. Then again, I tend to think that about most breweries I visit.

Visited here along with Odell and New Belgium. That mile stretch maybe the best area for beer in the country or even the world. The atmosphere was good. Seems like a lot of people who appreciate good beer. The selection was excellent and they allowed flights which for out of town visitors like myself is preferred. They had a few bombers for sale but were out of a couple. As far as quality each beer was "good" in my opinion. I am not sure if many of them were great but they were all consistently good. They seem to have a lot of outdoor events set up in their parking lot area which was fun as well with some discounted beer.

A nice, small but effective tap room with a good view of the brewery operation. They offer two samplers: one with the regulars and one with the seasonals. I went with the seasonals. It included a wood aged ale, a dopplebock with smoked malt, a double chocolate stout, a black IIPA, and a chili porter. I also subbed in a nitro chocolate porter for the coffee stout because I hate coffee. They were all enjoyable. I liked the black IIPA the most. It had an outstanding aroma and good flavor. I have to admit I only stopped in because I was coming back from Odell's and passed by it but I was glad I stopped.