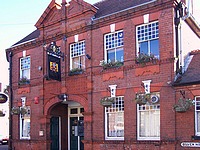 During one of my last all day Pub-Crawls of Derby whilst in the UK we decided to break from tradition & try somewhere new. We'd heard about the Falstaff from a few beer geeks & rumors that it was even Brewing. So 8 of us hired the services of 2 local Taxis from the center of Derby & headed out to the Falstaff. I have to say now that the Taxi Drivers looked concerned  then said youll be alright theres 8 of yers!

When we arrived we immediately knew what he meant. The Falstaff itself is a marvelous brick built old style roadside Pub. In fact, to be more exact it was actually designed as a modern day Coaching Inn by the long defunct Brewers; Pountain, Girardot & Forman (look outside for clues in the nice brickwork!). However, since then additional housing appeared & the surrounding area whilst not exactly rough, has seen better times, it can look intimidating. But its not actually that bad.

We entered through a set-in side door. The interior is of a classic unspoilt & unrenovated Locals Pub. A small wooden bar has a snug to the left, which had its own Real Fire, but was otherwise very basic in décor. To the right there is a larger more boisterous room. It houses a Pool Table, TV & Dart Board.

Once Tied (Allied) it is now a Free-House. As such the beer range varies. On our visit there were 4 Hand-pumped Cask beers, all were absolutely spot on & in great condition. Currently sells Greene King Abbot Ale, Marstons Pedigree, a rotating Leatherbritches beer & a Guest Beer, normally from an Independent Brewery. The staff are very friendly, as are the locals. We were made to feel very welcome & right at home despite initial reservations from the outside. On our last visit  the plans for the Brewery had taken a few twists & turns. To cut a long story-short, it had opened & closed in a short period, but was supposed to reopen thereafter. Even as of today, that still has not materialized, but plans are still in the pipeline to reopen it, at least officially ;-). Meantime, we had a chance to try some Blonde Ale that was brewed here, but had it free  just in case HMIoT were watching.

Known locally as the Folly, & with a clientele drawn from an eclectic cross-section of society, this is very much a real Locals Pub. Dont come here expecting a huge range of beers or even food (they dont do any)  but if you fancy a good quality Pint in a genuine unspoilt Derby Local, this is worth a visit  who knows, it may even be brewing its own beer by the time you get here!

Falstaff in Derby, GB2, United Kingdom
Brewery rating: 3.15 out of 5 with 1 ratings