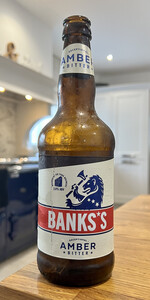 Notes: Crafted with the finest ingredients to deliver a really easy drinking beer. A deep gold in colour, it comes with malty, hoppy flavours and clean finish with fruity overtones. Great with a packet of pork scratching or a hot pie.
View: More Beers
Recent ratings and reviews.
Rated: 3.52 by TrojanRB from Texas

A case study in how large breweries destroyed historic, family-owned, English breweries through the 1990s and 2000s.
Banks (founded 1875) acquired many breweries over the decades including Marston’s, Camerons, Charles Wells, Young’s, Thwaites, Brakspear, Jennings, Wychwood and Courage. In 2020, Banks (who had changed their name to Marston’s in 2007) sold its brewing business to Carlsberg to focus on its pub chain business instead. All those historic English beers are now brewed, marketed and distributed by a joint venture 60% owned by Carlsberg, the manufacturer of one of the worst beers in the world, and it tells.

Reviewed by Hoppsbabo from England

4/5  rDev +10.5%
look: 4 | smell: 4 | taste: 4 | feel: 4 | overall: 4
A: Deep copper with a slightly off-white head.
S: Sweet hopiness. Not pronounced though.
T: Hmm, a very pleasing blend of crisp bitterness and subtle fruity sweetness. Maybe a touch metallic but mine's a fairly old bottle anyway. It's a plain old English bitter, which when done right is perfection in a glass, but this isn't quite there. I bet it's great on cask. Marstons pub co., you surprise me.