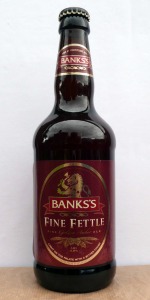 Poured into a tulip pint glass. A rich orange-amber colour with light carbonation. Forms a small head of white foam that lasts for a few minutes before dissipating. Aroma of light caramel malt with hints of cardboard, stewed leaves and fruity ale yeast. Uninspiring.

Meh - a rather average offering from Marston. Dull aroma and flavour with vague off-notes to trouble the palate. Body is OK but that's pretty much the only highlight. No great shakes - if you chance across it give it a miss.

A: brown-ish amber in colour, mild and sporadic carbonation, good clarity, topped with a thin beige
S: upfront the peach-blossomy and orangey-honey-ish aroma abounds, underlined by a rather subtle tinge of toffee-ish maltiness. But overall the honey-ish fruity aroma seems to be so dominating that it’s hard to pick up any other elements on the nose… Hops are rather timid in this case, if Fuggles and Goldings are indeed used according to the back label (meaning that the two varieties are not so pronounced and true to their aroma).
T: spritzy on the palate, the thin-bodied, smooth malty foretaste is a bit like barley tea even, going down with more fine sweetness from crystal or caramel malts; as the malty flavour quickly settles, a flow of earthy and roast tea-leafy tannic bitterness reveals itself by stealth, not in a big, rough way, but sufficient to render a pleasant, moderately bitter finish.
M&O: as mentioned, the palate is compromised a bit by the spritzy carbonation, otherwise the beer drinks very smooth and lubricating, albeit a bit lacking a proper body. This is a strange Best Bitter that is far more malty than it is bitter on the balance, although the label claims (or, purports) the style to be “Pale Ale”.

To be honest, after tasting the beer itself, I find the Cyclops description here to be nothing more than subjective and utterly useless in telling one what the beer might be like. At least, it fails to ring a bell on the beer I’ve just had…! Good intention, but not professionally executed, I’m afraid.

When poured a wonderful hoppy aroma is thrown up you can really smell the fuggles coupled with lemon zest and fresh croissants.

The taste is very malty, slightly sweet a taste of digestive biscuits that sits on the tongue for a while before warming to hops and a bitter peppery zing quite a complex palate indeed for 99p a pint!

Really good carbonation a little spritely but it almost goes unnoticed until oops **burp** pardon me and quite a solid mouthfeel.