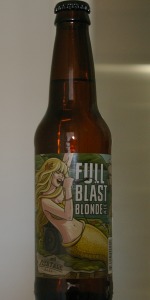 Woof, I should have known when this shit was marked down at ToeDull Whine that it sucked. But sometimes a ticker gotta tick and why not.

Pours a cloudly, lightly bright yellow color with 2/3" white head. This is prolly the only part of the beer that isn't disappointing. The aroma is lemony copper bitterness. Like, for a blonde ale, this smells really bitter. Shit, this smells bitter for an ipa.

Taste, oh man, it got worse. Now, 90% of that lemon bitterness is gone, and all you're left with is that copper bitterness. Really lacks flavor beyond that grating difficulty. I think this was one of those distributor dumps, I mean, fish tale was never inspiring, but this was bad even for them.

When I think of a blonde ale, I think of something to drink that is super simple and easy. This was simple, but punishing, and quite the challenge to get rid of a 6 pack. Was able to pawn most of them off at softball, where bad beer goes to die as a freebie.

The taste is malt, some floral, slight cracker & bready malts, not bad Cheers! B-

Pours a cloudy yellow with a generous head.
Smell is sweet malt and slightly floral.
Taste is a good mix of malt and hops. Some grass and pepper.
Dry finish.

Another mini-horizontal, thanks to the Bottle Backlog here at Chez Woody! Given that it is one of my approved pics, I have a feeling that it was when the process was much more drawn out than it currently stands. I am usually reluctant to drink a beer until a/my pic has been approved, leading to beer falling by the wayside.

The label on the bottle is kind of a mixed metaphor in that it is a Blonde mermaid and not a Siren singing at Full Blast, attracting the approaching ship onto the rocks. The art itself is not attributed, but it is a pretty cool label.

I Pop!ped the cap & began a gentle pour since the mermaid had done nothing to merit anything but gentility. Once a sufficient amount had been decanted into the awaiting glass, I happily gave the liquid a hard swirl, raising a finger of fizzy, foamy, eggshell-white head that quickly returned to wisps. Color was Yellow-Gold (SRM = 4 -5) with 24-carat clarity, summoning forth The Gelt Gang of Mammon, Midas & Croesus, all anxious for both a taste and a chance to talk to the Blonde mermaid. Down, boys! Nose had a honey & biscuit-like sweetness, invoking memories of my youth when my maternal grandmother would bake biscuits & I would drizzle honey on mine. Mmmm. Mouthfeel was a bit thin, not watery, per se, but not much beyond it, either. Oh well, can't have everything. The taste was more bready than biscuity, attesting to its inherent sweetness, but the honey taste remained. Finish was semi-sweet, refreshing and very tasty. Rumor has it that this is now their "Summer Ale", and while it would be nice on a hot, humid summer's day, it was not bad tonight, either.

Pours a nice golden color, slightly cloudy. Aroma is of some sweet malt, very sugary. Taste balances the sweet and bitter very well, allowing the sweet sugar of the malt to stop just short of overpowering the hops. Feels nice, carbonated, and cool on the palate. Finished very clean with just a touch of bitterness !!. One of the better blonde ales...

This brew pours a cloudy yellow orange color with a minimal head and good carbonation. There is very little lacing; some of the head remains on top as a collar.

The smell is musty and dank with a hint of rye and sweet malts. Maybe a little peppercorn and bubble gum smell as well.

The taste follows the nose, sweet malts, hay, rye, bubble gum and pepper. Everything blends together nicely. There is a dry and gritty aftertaste.

The feel is grainy, grassy and gritty, slightly dry and gritty aftertaste.

Overall this is not as smooth as other blonde ales but that is not a terrible thing. The gritty aftertaste reminds me of a Pilsner and the slight taste of rye reminds me of a rye beer. This is an interesting take on the Blonde Ale style.

I am very meticulous about my lighter beers being super ice Cold. I placed in the freezer for about 15 minutes prior to cracking it open. I've only tried about a 1/2 dozen Blonde Ales and out of them this was my favorite. The beer had a light hop profile with a refreshing flavor. The whole reason I tried it was to cool down after a hot day. It served it's purpose.