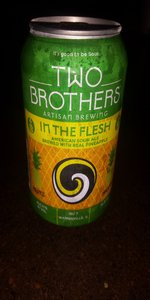 Fruity but ultimately punishing; for true sour-heads only.

Reviewed from notes. Poured from a 12 oz. can into a Cycle Brewing goblet.

A: Mildly hazy light gold – actually surprisingly clear, though a slight haze persists. A big blush of initial visible carbonation dies very quickly, as does the briefest of small white heads. After a few seconds, it more resembles a still beer or a cider – nothing moving.

S: At least when cold, this is disappointing. Only a very slight aroma overall. After working at it, there’s a mild lactic tart and a husky cracker two-row malt. That’s all I’m getting, at least for now. We’ll let it warm some… Nope. Even when close to room temperature, that seems to be all there is.

T: Modest lemony lactic and citric tartness, not particularly acidic. Pale two-row malts again, though not quite as husky as the nose suggested. More lemony citric acid drying it out at the end.

M: A light body, and while a relatively low level of carbonation sensation it's not as flat as the appearance suggested. Minimal alcohol presence.

O: It’s not a terrible beer. The flavors are decent, and while I’m gonna quibble a bit with the husky aromas/flavors, it’s not something uncommon to run into with quite a few American sours. There’s no funk to speak of – again, it would be a better beer if it did, but it’s not awful that it doesn’t. But there are no peaches. Maybe just a hint of “Ah, there're notes of stone fruits in this sour” kinda thing, but no real “peach” flavors that I was hoping for. Fou Foune, this is not. If you gave this as a blind taster, I think it would fare better without those expectations. But as it is, it’s just a let down.

It pours a nice light yellow with a small head that leaves quickly leaving no sign that it was ever there. The smell is tart with a small scent of mango. The taste is a good lip puckering tart fruity flavor. Usually I am not a fan of sours or tart taste but this was actually pleasant. The feel is light but not watery. Overall a surprising nice one.

I'm in a wild mood, but sour always takes a bit of puckering up practice.

It pours light yellow with minimal head. The aroma is a bit of a warning- it smells like dangerous cider. The taste is a much more over-the-top sour than I expected, but I can man up and enjoy.

Recommended as a novelty, but it is a very poor value (overpriced).

Pours a beautiful clear, pale yellow gold with a fat finger of white head and a slow effervescence. The head is very quick to dissipate into a thin crown, but before that it is an absolutely gorgeous beer.

It has a lightly sour, barnyard-like aroma, with more of a white peach skin and underripe peach flesh thing going on than a juicy peach flesh impression. There's a hint of pancake or crepe malt behind that, too. Pretty nice balance, which is something I don't often notice in the nose.

Medium bodied with decent carbonation that leaves a slight prickliness in the feel.

Not an insane amount of depth here, but a really pleasant, easy-drinking, mild sour that exceeded my expectations. Lot 0817, if that means anything to anybody.

Aroma is Brett, funk and earthy. The flavor is Brett funk, malts, citrus/tropical fruit and a mix of mild sweetness, tart and slight sourness in the finish.

A sour, tangy ale with a faint scent. The pineapple isn't very well pronounced but the execution as a sour ale is on point. It's a good, solid sour - not much else I can say about this one. I do wish there was a little more on the nose, but if you're looking for a straightforward sour ale this is a good pickup.

Tasted in a 12 oz snifter from draft at Emil's on July 9, 2016. The look and feel of this beer are on point. The smell and taste, though, is just sour. If this is brewed with pineapple, I could not detect it in the nose or on the tongue. If you are hoping for some pineapple sweetness, I would not recommend it.

This is a fun one. While the sour punch up front is rich, it's not so tart and acidic that it's unpleasant to drink after a while. The pineapple blends seamlessly into the citric tang, with a mild fuzzy earthy character presiding. I'd bring a couple to the beach.