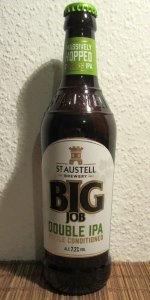 From the bottle in a snifter via our friend from across the pond---Cheers Keith!
This nice little brew pours a clear amber tinged golden with a modest head of
white dissipating foam that settles to a thick ring, thin wafting layer, and sports
subtle lacing. Nose of sticky citrus and herbal hops along with sweet caramel
malts for backbone. Flavors exceed the nose by presentation with rich caramel
that is given the full run of light pine and herbal hops with a touch of pineapple
and citrus notes and a hint of English yeast. Nice mouth feel; medium body,
sticky, medium carbonation that is effervescent and lively, and a medium dry
to dry finish heavy on the hop aftertaste.

An American style done right with a light twist from England.
Very nice.

L4 Classic, lively, excellent head retention. No cloud.
S4.25 Very fruity, tropical, mango, promising.
T3 Disappointing. Not getting any of the tropical flavours promised by the nose, just a lot of alcoholic sourness.
F3.75 Ok lacking some body
O3.25 A double IPA needs to deliver big flavour and this just doesn't do it for me - bottle conditioned beers have not be great in my experience - maybe I just need to be more careful when pouring but I don't want to have to read label small print before enjoying a beer.

taste is a bit better, some american hops, touch of bitterness, some malt

full body as you'd expect for the size of beer, medium carb.

Its little brother Proper Job is a much better beer

500 ml bottle, Morissons, Bristol - Pours clear amber with a thin white foamy head, which quickly dissipates. Medium carbonation. No noticeable lacing. Aroma - Sweet citrus notes - orange, grapefruit. Taste - Sweet forefront with a zesty citrus notes - orange, grapefruit leading to a long dry bitter finish. Saw this in the local supermarket, supposedly hard to get so gave it a go. For some the clean filtered character will appeal but not really for me. Feels like an upped ABV version of Oakham Ales Citra, a great beer which made me love US hops but since moved on. Nothing badly wrong with this,but personally too clean for me, even in the aroma.

L:
-pours a clear golden-orange with a small to medium,offwhite head
-low to medium carbonation visible
S:
-grapefruit,oranges,tangerines,grassy,spicy,peaches
T:
-Follows the nose plus honey
-noticeably watery throughout the finish
-low to medium bitterniss for the style
F:
-medium carbonation
-light to medium body
O:
I drank this 2 weeks past it's best-by date, so i give it a bit of leeway.
This is mildly decent overall, though a bit underwhelming.

Bottled and bottle conditioned
rich amber bodied and good frothing foamy white head
some citrus on the aroma
the flavour reminds me of a fruity flavoured chewing gum of the juicy variety
it didn't seem to be as solid as the abv would suggest
but bearing in mind I picked this off a supermarket shelf, it would compete with a lot of stuff I paid more than twice for in speciality bottle shops

A: Dark gold body with a dissipating head.
S: Not a lot going on here.
T: Not as good as I was expecting, considering how much I love Proper Job. Nice and earthy, and despite being packed with 'as many Citra and Centennial hops as we could get our hands on' it doesn't taste particularly American, or overly hoppy. Has only a subtle amount of hoppy perfumeyness, but lots of lovely satisfying earthiness. For 7.2% though I'm wanting more. It is deliciously dry, but I think it could benefit from a bit of sweetening malt. That would really bring out the bouquet.
O: Dissapointing based on my expectations, but a good beer regardless.

S: Citrus fruits and Cascade hop, wasn’t the most pronounced aroma I’ve ever smelled from a beer.

T: A bit of a grapefruit bomb, hints of wheat, decent amount of bitterness, hid the booze well.

O: SNPA on steroids, nicely done, not overly in your face but interesting.

Pours a light golden colour, almost like a farmhouse ale. Strange lemon and yeast on nose. Bitter palate but again an odd yeast flavour. Perhaps an off bottle.

Pour is two fingers of fine, white head settling quickly into one finger, with not much lacing. Dark golden colour and slightly cloudy.

Initial taste is softer than expected. The pungent hoppy aroma doesn't translate to the taste or mouthfeel, and it's all quite smooth and subtle. Not as BIG a flavour as I would have expected.

Overall, a very drinkable beer, and hard to believe it's ABV as it's so easy to drink, although not as BIG a flavour as I expected from the nose.

Shared it, and got thing I did because it's just strong. It pours with a clear and golden color and a decent and not really thick white head. The aroma is extremelly pleasant. Sweet and fruity thanks to the citra hops (on of the best aromas out there). The taste is completely different, especially after such a smell. It's bitter, hoppy, bitter and hoppy. A very strong taste with a bit too much bitterness for me. The aftertaste is also very bitter and I can still feel it.
A good beer, but not really for me.

Nugget, Centennial, Cascade and Citra. BBD 25.Jul.2014, so coming up near the end of 3 months freshness.

It's certainly got the hopping right - there are all sorts of angles to this combo, with Centennial and Citra representing the most - making it very refreshing, especially with no heat. But i's pale and thin for the strength (by Brit standards, anyway) and the bitterness is a bit powdery which is not quite a flaw, but not on point either. And it's in no way - IBUs, aroma, ABV - a DIPA.

Solid, above average American IPA but given the brewery, I expected more somehow.

Pours clear golden-yellow with a finger of off-white cap that sets at medium pace.

Nose is lychee, citrusy and spicy hops, banana esters reminiscent of Hefeweizen (a brief look at the back-label confirms the assumption that wheat-malt has been used in this one) and there's only subdued malt aroma.

Flavor is lemony with very restrained pale malt character. There's a pleasant lasting retronasal oflaction provided by hops. No harshness nor oaky flavors as it should be and absolutely no signs of being 7%.

Doesn't seem very much like an Imperial one but flawlessly crafted nonetheless. (A presumably fresh bottle without BB indication, into tulip.)