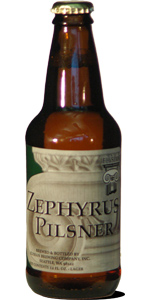 Pint at Growl Movement in S.Salem. $4. Pours a typical pilsner light gold ,small white head. Nice aromas of grassy hop and biscuit malts..pleasing. Taste again is to style but on the fruitier side, nice hop profile. Good drinkable palate..not to thin but goes down a treat. Good pilsner..very drinkable.

At Billy Rays Dive on tap on NE Portland Oregon for $4. This is my favorite pilsner yet. Ive only tried about ten in last month and knew very little of pilsners previously, but this is my favorite so far. Poored with little head. Nice color and smell. Grassy and hoppy yet smooth and delicious. First truly enjoyable pilsner Ive had, the other german and unfiltered german pilsners Ive had around Portland werent as good.

A bit subtle in the big picture of beers, yet very appropriate for the style, sweet, yet crisp, grassy, grainy malts. Fresh lemony citric zest.

Another solidly crafted beer for the style from this brewery. Easy drinking, but pleasant flavors if you take the time to appreciate them.

Had on-tap at the brewery in Seattle.

Golden, extremely clear in the body, with a white filmy ring of head. Some lace forms, but it's patchy and inconsistent. Yeah, it's a pilsener, not a particularly inspiring looking one.

Not much on the nose either. Some spicy characters, tending almost towards savoury. Fresh hop character is almost entirely absent, leaving a meaty note and a brusque grain in its place. Underwhelmed.

Taste is a lot better, but only because it's genuinely unusual. Grainy entry almost gives a sense of roastedness, before (and here's the really weird part) a big, spicy, peppery, chilli flavour comes through. It's just the flavour of chilli, not the heat or bite (or even the fragrance), but it's very strange. It even disappears before the aftertaste, which is smooth and light, with minimal bitterness.

Very smooth feel, so much so that it feels slightly undercarbonated.

Surprisingly drinkable and surprisingly good all up. Overall, it's very weird, but captivating in its weirdness.

Guest judges J and K both enjoyed this one.

I had this one at their location near the Mariners ballpark. Served in a normal pint, the beer is a light gold with a chill haze. Bone white clingy head.

Nose of light spices, milled grains and something a tad floral.

The taste is crisp with peppery hops, grainy bready and a touch of sour green apple.

The mouth is brisk with nice carbonation. Beer lingers with a long finish.

Nice version, like the combo of German and Czec hops

Sample at the Pike Street location. Pours a clear golden-orange color with a medium thin white head that dissipates steadily. Spotty lacing throughout. Hops, yeast and malt in the nose. Light-bodied and effervescent with flavors of zesty hops, malt and milld yeast and spices. The finish is clean and hoppy with a light peppery and spiced aftertaste. Average overall.

A fine suspended particulate makes this a bit clouded for a pilsner, though perhaps we should expect as much from a beer named for the west wind. Bright copper colored with an adequate, soft ivory head. Biscuity and tangy flavor with shrill bittering, sharp edges, and considerable spice in the finish. There's a little butterscotch in the nose. Workable, but not high on Elysian's list of accomplishments.

A bright gold beer with a crowning, bonewhite head that sits cloud-like above the rest of the beer. It would be easy to think that a drink this beautiful was becoming to the gods and heroes themselves on Olympus and in the Elysian Fields.

The bouquet is salty and even doughy with a hint of honey and some, though not much, floral presence. Honey dominates the palate as well, giving a just-right sweetness to what is otherwise a very dry pils with a clean bitter finish. The only drawback is a bite of bitterness on the aftertaste, a surge of hops that interrupts an otherwise smooth finish to the beer. It is emminently refreshing--a light bodied whiff of summer air, the breeze of the Greek deities in a modern American craft beer.

Highly recommended--Elysian has hit a home run with this one.

Consumed in October 2004 from a 22 oz bottle purchased in Redding, CA. Poured with a great huge beautiful head and nice lacing. That's the good part. The bad part is everything else. Smelled bitter and sour. Kinda like a batch of lemonade gone wrong. Tasted about what it smelled like. BITTER BITTER and more BITTER. A pilsner? Huh? Took me a while to get this one down. A very dry finish also. Sorry, not my cup of tea.

I had high hopes for this one, especially after the IPA I tried. Pours a nice orange/yellow with a nice froth foam head that vanishes to a lace quickly, the smell is very sour, citrusy and tangy sugar. The sweet malt I was expecting was light and almost untraceable. The taste was to sour, the hops did not blend right with the malts, the malts were not strong and the hops overtook the sweetness in a bad way, the citrus seemed almost to much. Lighter bodied then the average micro pils but not what I expected.

Appearance  Light, cloudy yellow in color with a tinge of orange. The head was monstrous, fell slowly, and left a nice lacing as most good pils do.

Smell  This smells kind of funny. Its definitely not the classic pils aroma. There are some hop scents in there, but it smells like about 17 lemons were squeezed into this one.

Mouthfeel  Decent carbonation with a somewhat dry finish. The mouthfeel isnt bad on this one.

Drinkability  This was a real sipper, which is just the opposite of a good German Pilsner.

Comments  You can give this to your Bud friends and tell them its an authentic German Pilsner, but dont serve this to a visiting BA buddy or anyone from Europe.


Zephyrus Pilsner from Elysian Brewing Company
Beer rating: 80 out of 100 with 28 ratings