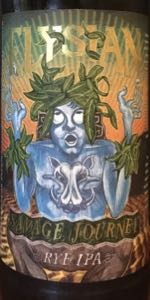 Pours a slightly hazy pale gold with an impressive and long lasting head of foam.

The smell has a lot of citrus, rye, pine, some toasted malt. Doesn't seem like the age hurt the smell. What do I know?

The taste has oodles of pine, light grapefruit, dank, spicy rye, toasted malt, again, it's better than I anticipated.

Medium bodied with kinda light carbonation. Not the best mouthfeel.

Interesting. Worthy of a repurchase? Nah.

Handsome clear golden amber brew with long-lasting sticky foam. Mouthfeel is delightfully sudsy. Aftertaste is certainly bitter, like they amplified the rye taste with a big dose of hops, which are listed at Enigma and HBC 472, described as "feral." Lovely oak barrel scent along with a subtle peach and papaya fruitiness.

Distinct rye flavor, grainy and dark. Well, I have to admit this is a very intriguing brew regardless of who makes it. I'm going back for more if they IPA hounds haven't scented it. From the 22 oz bottle purchased at Elizabeth Station in some northern town that caters to college kooks and Canadian consumers.

Flavors are rye spiciness, pine hops with some juniper (?) , and a good deal of biscuit malts. Carbonation is kinda heavy and aggressive.

Poured from a bomber into a pint glass
Appearance – The beer pours a moderately hazed golden amber color with a one finger head of white foam. The head fades very fast leaving a tiny bit of foamy lace on the sides of the glass.
Smell – The aroma of the brew is rather strong of a bready and caramel smell that is mixed with some herbal and nice rye bread smells. Along with these aromas comes some earthy hop aromas as well as a light tangerine and grapefruit hop smell, producing a very inviting and slightly dank aroma.
Taste – The taste begins with a dense bready and caramel taste that has hints of some herb upfront. There is not too much rye at the start, but as the taste advances some rye and some nice oaky tastes hit the tongue, bringing a little bit of dankness to the brew. As the taste advances further there are hits of tangerine citrus and grapefruit which seem to complement the herbal and oaky flavors quite well. Some earth and a bit of pine join at the very end, and with a slight surge in the sweetness due to more tangerine and orange, as well as a light bit of coriander and clove, one is left with a smooth rye bread taste to linger on the tongue that has a nice dank and sweet balance to it.
Mouthfeel- The body of the brew is slightly thicker and chewier with a carbonation level that is lower than normal. For the mix of moderate rye, dank and citrus hop, mixed with sweeter malt and fruit, the feel is awesome and makes this a slow and enjoyable, but easy sipping brew.
Overall – The look of the brew at first left me unimpressed, but I must say…this is a very tasty brew overall. It is a nice take on a rye as it incorporates the traditional dank tastes, all while embracing a nice citrus and sweet background. The touch of oak adds a nice mellowing factor to the dank and the sweet and makes this one slow, but easy, sipping!!! Elysian should make this a mainstay. Besides the Great Pumpkin, this may be my fav from them thus far.

22oz bottle labeled for experience by 08/18/19 and served in a pint glass. Pale golden, clear, with tiny bubbles and not much head. Aroma is sweet and fruity, like apple juice, which is surprising for a rye IPA, but maybe not as much for a hop that "possess notes of bourbon barrel-aging" as Elysian claims. Flavor has alpha hop proportions that make more sense as an IPA, but seriously unusual and unexpected flavors beyond that. I would say fir and cedar more than bourbon barrel or vanilla. The dry spice of rye is a secondary contributor, which is probably a good thing since Enigma and HBC 472 make for such a distinct and intriguing flavor profile, rye could have easily been an unwanted distraction. Bonus points for being so unique, but I have to discount because I'm finding the aroma positively unpleasant.