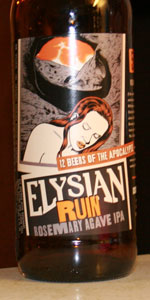 With the world crumbling around us, there may be nothing left but you and this beer. Ruin builds you up before it breaks you down, with herbal and citrus aromas and the desolate yet compelling wind of the desert. Fresh rosemary in the mash, powdered lemon peel in the finish and pure agave nectar in the boil combine with fierce Amarillo hops to bring you an IPA to hunker down with. Stock it next to your canned goods and drinking water, and wake me when it’s over.

4.21/5  rDev +16.6%
look: 4 | smell: 4.25 | taste: 4.25 | feel: 4 | overall: 4.25
For a long time, before I started The CANQuest (tm), before I became a "serious" beer writer, I was "The Beer Pest" with an irregular column detailing my misadventures with beer. It was especially apropos as I had one column that personally incensed Dick Cantwell! All is forgiven, or so I am told. Such was never my intention. I really wanted the entire series in this lineup, but our distro from Elysian here in PA was spotty at the time of release. 8=( I am a HUGE fan of Charles Burns & his work so this should be interesting.

From the Bottle (!): "12 Beers of the Apocalypse"; "Rosemary Agave IPA"; "5 Black Hole Ruin"; "If the world were coming to an end, what beer would you brew? Utilizing artwork by Seattle native Charles Burns from his graphic novel classic, Black Hole, Seattle's Elysian Brewing and Fantagraphics Books team up to answer the question with The 12 Beers of the Apocalypse."; "Beer #5: RUIN Rosemary Agave IPA brewed with agave nectar and lemon peel. There may be nothing left but you and this beer."

I was kind of anxious to Pop! the cap on this one since I "discovered" a half-full fifth of Jose Cuervo Gold in the liquor cabinet at Jerry's 420 House of Pleasure yesterday. I knew that my beer was an old bottle so a slow, steady, gentle C-Line pour into the awaiting glass was the order of the day. My gentleness did not raise much more than wisps, but that was understandable. Color was Amber to Deep-Amber/Light-Copper (SRM = > 9, < 13) with NE-quality clarity. Nose had a very floral, herbal spiciness which I found intriguing. Mouthfeel was medium. The taste was at once herbal & spicy, very evocative of both of its adjuncts. I liked it for its spiciness, but it might have faltered as simply an AIPA, illustrating why it is SO important to rate to Style & NOT to taste. The rosemary was really prevalent & it reminded me of some Navy meals where they seemed to think that if one Bay Leaf was good, several would be better. Better if you like to taste nothing but Bay Leaf! Samey-same here - everything else was getting lost amongst the Rosemary. It is a strong-smelling & strong-tasting herb, which is why we were taught in HomeEc to open, sniff & taste EVERY herb & spice in our kitchen's cabinet before adding it in any measure, whether called for or not. It gave me a real appreciation for the craft of cooking, lemme tell ya! I needed a refresher course on Agave, though, (not really) & took a sip of the tequila. Yes, just a sip. I have never liked the concept of "shots" & prefer to taste my liquor. My subsequent draught from the beer allowed me to appreciate a subtle syrupy salty-sweetness in the beer. This was definitely a beer that was the sum of its parts. They meshed nicely, begging the question(s) - Was it my aging that led me to like it more than earlier reviewers? Or was it that I was thinking of it as an Herb & Spice Beer where they may not have been? These are ongoing, unanswerable questions for me as I continue to delve into my backlog. Finish was dry. a any spiced beer should be expected to evince. It was a very pleasant drink & the accompaniment of tequila did not hurt. ;=) YMMV.

Tastes upfront of fruity hops and some honey sweetness, followed by agave and herbal notes.

Medium to full body with tingly carbonation on the roof of the mouth.

I'm really getting into agave in beer and this is a pretty good example of it being used well. It balances the hops well without being too sweet. The beer manages to feel clean and refreshing while also keeping some heft to it. Quite good and would certainly have it again.

Reviewed by Mora2000 from Texas

The beer pours a yellow color with a white head. The aroma is full of rosemary and agave - unsurprisingly - with some biscuit malt thrown in. The flavor is similar. The rosemary notes really come through strongly in the flavor, but they are jointed by some biscuit and other assorted herbal notes. Low bitterness. Medium mouthfeel and medium carbonation.

Reviewed by oline73 from Maryland

Appearance: Pours a cloudy amber color with a yellow hue. There is a half finger of fluffy off white head that leaves a layer on top of the pour.

Smell: The hops are there with a strong floral note. I'm also picking up some tropical fruit that reminds me of papaya.

Taste: More malty than the smell indicated. I'm getting some bready yeast notes. The bitter hops build toward the end with some fruity floral notes. I'm not sure that I'm picking up the rosemary. The finish is bitter from the hops.

Mouthfeel: Medium body with tingly carbonation and a dry finish.

Overall: Lots going on here, but I'm not sure it all worked for me. It was an interesting beer, but I don't think I need any more.

T - Lemons, with a bitter grass finish, lost in sweetness.

Reviewed by corby112 from Pennsylvania

Pours a cloudy pale golden orange color with golden edges and a half finger white head that quickly settles into a lasting ring. Sporadic spots of lace left behind.

Medium bodied with a lot of citrus sweetness and pale malt flavor countering the floral, herbal hops.  Zesty spice up front with some herbal freshness and dry bitterness that's countered by hints of mango, pineapple, grapefruit and orange peel.  Agave adds more sweetness but is kept in check by pale malts.  Nice hop presence up front that is overpowered mid palate reappearing in a dry finish.  Abv decently masked making it easy to drink but it's still kind of mediocre.

Appearance: hazy orange hue with a robust effervescence. and two fingers of frothy ivory head. Looks like a good IPA.

Smell: aroma is earthy, herby and slightly soapy. There's also a dry biscuity element which pairs with the rosemary herbiness which gives me the weird impression of sagebrush; not precisely my favorite impression from a beer. Still, it's not too bad.

Taste: nice maltiness; a bit on the sweet side. There's also a light fruitiness here, which may be due to the agave or perhaps a good Citra or Amarillo-type hopping. The rosemary is unobtrusive and adds a mild but interesting herby quality. Bitterness is moderate at the end, but is somewhat accentuated by the rosemary. I actually rather like this beer!

Mouthfeel: medium body with a good level of carbonation and a nice, smooth creaminess. Good stuff.

Overall: I was not expecting to like this beer very much, and I am quite pleasantly surprised. It works quite well for my palate.

Reviewed by DaftCaskBC from Canada (BC)

O: Sweet and bitter, a nice change from traditional IPAs with the floral and agave
additions

A nicely balanced beer, rather unique without throwing in any extreme deviation from the IPA style. Pleasant and delicious.

Reviewed by DavoleBomb from Pennsylvania

3.0 A: Well hazed yellow orange color. Two fingers of frothy off-white head. Retention is below average and a sparse few clumps of lacing are left.

2.5 S: Both the rosemary and the agave are quite apparent. The rest of the IPA isn't. The remainder smells wheaty and yeasty. Maybe some herbal hoppiness, but that might just be the rosemary. Still, it's not bad.

3.0 T: Again, lots of rosemary and the agave is apparent. The taste offers a lot more than the nose. Mix of citrusy, herbal, and earthy hoppiness. The rosemary works well with the hops. There's some yeasty breadiness, but it works well with the rest of the beer. Not a ton of malt component though.

3.5 M: Medium body. Good moderate carbonation. Lacking the creaminss I like in an IPA, but not bad overall here.

3.0 D: Pretty mediocre beer. It's not bad, but nothing I'd like to have again.

Pours a cloudy orange color, with a frothy white head.

Smell is a faint pine and floral scent.

Taste is a bitter pine flavor up front, with a dry spice flavored finish.

Overall a drinkable brew, but the rosemary spice does nothing for me in terms of beer. I'd prefer more citrus flavor.