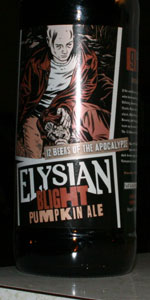 Notes: The harvest is over before it's begun. Nature's bounty is dying on the vine. The dry rustle of crop failure is on the wind. Verdant abundance has given way to so much shrivel and waste, except for Blight, a bright spot of an ale brewed with pumpkin, dark brown sugar and fiery Vietnamese cinnamon.

Blight was brewed with Northwest pale, English brown, German Cara-hell and Belgian Cara-vienne malts, bittered with German Northern Brewer, with additions of Oregon pumpkin to the mash, kettle and fermenter. Vietnamese cinnamon and dark brown sugar were added to the boil.

4.35/5  rDev +7.7%
look: 4.25 | smell: 4.25 | taste: 4.5 | feel: 4.25 | overall: 4.25
For a long time, before I started The CANQuest (tm), before I became a "serious" beer writer, I was "The Beer Pest" with an irregular column detailing my misadventures with beer. It was especially apropos as I had one column that personally incensed Dick Cantwell! All is forgiven, or so I am told. Such was never my intention. I really wanted the entire series in this lineup, but our distro from Elysian here in PA was spotty at the time of release. 8=( I am a HUGE fan of Charles Burns & his work so this should be interesting.

From the Bottle (!): "12 Beers of the Apocalypse"; "Pumpkin Ale"; "9 Black Hole Blight"; "If the world were coming to an end, what beer would you brew? Utilizing artwork by Seattle native Charles Burns from his graphic novel classic, Black Hole, Seattle's Elysian Brewing and Fantagraphics Books team up to answer the question with The 12 Beers of the Apocalypse."; "Beer #9: BLIGHT will sustain you with an ale of pumpkin, dark brown sugar and a jolt of fiery Vietnamese cinnamon."; "Remember: THE END IS BEER."

I Pop!ped the cap to begin a slow, gentle C-Line Pour since this was one where I definitely did NOT want to rouse any lees. I got naught but wisps for my troubles, despite having heard a CO2 hiss as I Pop!ped the cap. Hmm. Again, rousing the lees was out of the question. I'll take the loss of discernible head in return. Was the spice holding it in check? Trepidatiously, I leant in for a sniff. Ever smelled Vietnamese cinnamon? I've had it shoved in my face in lieu of mace before! My eyeballs STILL sweat at the memory. No playin' around, this stuff is like ground mace &in the face, eyes, up the nose, it is a debilitating nightmare. Nose was VERY evocative of liquefied pumpkin pie & the dark brown sugar struck me as more towards treacle with a brown breadiness, while the cinnamon was present without being overwhelming. 8=) Yum! Mouthfeel was medium-to-full, not quite creamy, but certainly big for the style. The taste remained liquified pumpkin pie, but I was not getting the high-intensity heat from the cinnamon that the label alluded to. Finish was dry, as any spiced beer should be expected to be, but it was only setting of the smallest & slightest of alarms. YMMV. & next, for that dreaded final pour. It was murky & slightly spicier than the rest of the bottle, but I never experienced the intensity of Vietnamese cinnamon that I was expecting. Fine by me.

Reviewed by artdob from California

Reviewed by Jeffreysan from Virginia

Appearance: Pours a pretty, cloudy, deep mahogany color speckled with lots of orange highlights and a quarter of a finger of white-colored head that quickly dissolved into a thin lacing of foam that partially covered the top of the beer.

Taste: Tastes just as good as it smells! Strong flavors of pumpkin and pumpkin pie spices, such as cinnamon, nutmeg, clove and ginger dominating the flavors up front, followed by some really tasty flavors of toasted malt and brown sugar-like sweetness. There is a slight sour note as well toward the finish, as well as a touch of bitterness which is a nice complement to the brown sugar-like sweetness and all of the pumpkin pie spices. Delicious!

Mouthfeel: Medium-bodied and pretty effervescent, actually. With an ABV of 7.4%, there is no alcohol on the palate.

Overall: This is a very, very delicious beer. Too bad it's not brewed anymore, as I'd certainly like to get it again!

Pours clouded dark orangy/brownish amber, minor hear that goes quickly and leaves next to no lace on the glass.

Cinnamon all over the nose.

Healthy amount of pumpkin and even more cinnamon on the palate. Carbonation seemingly on the low side. Smooth and enjoyable cinnamon provides a nice zestyness to the the finish.

A bargain and certainly worth trying at only $2.49 at Pioneer market on the UWS of NYC.

Reviewed by twiggamortis420 from Texas

Smells like cinnamon honey! Like toast in the morning with butter, cinnamon and pie spices. Smells really good.

Tastes like a bowl of Golden Grahams with some raisins and honey drizzled on top. A unique (and sweet) take on the style...low on the clove/nutmeg spices and big on the cinnamon and honey. I liked it quite a bit...went down very easily.

Reviewed by Goblinmunkey7 from Massachusetts

Smell: Loaded with spicy cinnamon. Some softer typical spice profile, including cinnamon and allspice. Nice push of squashy pumpkin. Malts are lightly sweet with a slight biscuity and caramelized undertone. Minimal hopping, slight hints of citrus and earth. So much cinnamon, but it's spicy sweet, rather delightful.

Taste: Nicely balanced approach. Malts are lightly sweet with come caramelized malts. A tiny but bready with a soft hint of earth from the hops. Squashy pumpkin runs through the back with a nice compliment of nutmeg and allspice. Cinnamon plays up front here, but it's spicy sweet, almost like a Red Hot candy, but not quite that sweet. Warming drops out some of the cinnamon, leaving a heavyish spice profile over a mellow squashy pumpkin. Mild sweetness throughout.

Mouthfeel: Medium body with a slightly below average carbonation. Clean and easy drinking.

Overall: Scorch the earth and come back for more.

4.14/5  rDev +2.5%
look: 4 | smell: 4.25 | taste: 4.25 | feel: 3.75 | overall: 4
A: Pours a hazy orange amber in color with light to moderate amounts of visible carbonation and some copper highlights. The beer has a half finger tall light beige head that quickly reduces to a medium sized patch of very thin film and a thin ring at the edges of the glass. Light amounts of lacing are observed.

S: Moderate to strong aromas of cinnamon with lighter notes of other pumpkin spices (nutmeg) and just a hint of pumpkin.

T: Moderate flavors of cinnamon dominate the taste of this beer but that is over the top of lighter notes of pumpkin and just an hint of nutmeg. Light amounts of bitterness in the finish which fade very quickly.

M: On the lighter side of medium bodied with moderate amounts of carbonation.

O: As someone that really enjoys cinnamon, this beer did a great job of showing off the flavors and aromas of the cinnamon in a pumpkin beer without being overly sweet. I really enjoyed this one and would gladly have another if I ever find it again.

4.07/5  rDev +0.7%
look: 3.75 | smell: 4.25 | taste: 4 | feel: 3.75 | overall: 4.25
A: The beer is hazy yellowish amber in color and has a slight amount of visible carbonation. It poured with a thin off white head that quickly died down, leaving lacing on the surface and a collar around the edge of the glass.
S: Moderate aromas of pumpkin spices are present in the nose - cinnamon seems to stand out in particular.
T: The taste is similar to the smell but the cinnamon flavors are a litte subdued and there are also notes of pumpkins.
M: It feels nearly light- to medium-bodied on the palate and has a moderate amount of carbonation.
O: I really enjoyed this beer because it wasn't sweet and had really pleasant flavors of cinnamon that weren't overdone.

Appearance: lightly hazy orange hue with a light effervescence and plenty of floaties in the body. Head is a finger of frothy tan foam with a hint of an orange cast. Not bad!

Smell: sweet aroma with lots of cinnamon and a hint of pumpkin undertones. I must admit the overall effect is one of cinnamon-laced breakfast cereal; indeed, the suggestion is almost apple-cinnamon. Very interesting; weird, but not bad.

Taste: wow, at first taste I wasn't entirely impressed but as the flavor develops, I kind of like it. The aftertaste, especially, captures a wonderful cinnamon character with just a hint of pumpkin (and perhaps not a little of the aforementioned suggestion of apple). A bit sweet, but the sweetness is appropriate here.

Mouthfeel: medium body with a decent carbonation and a reasonable creaminess. Not bad.

Overall: this is a beer about which I'm not sure how to feel. On paper, it's certainly a "meh", but this cinnamon character is absolutely intriguing. Definitely worth a try if you come across it.