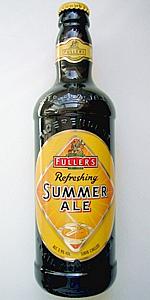 This brought some heartiness and bitterness even under the moniker of a summer ale. Too often that just means bland/refreshing/highly carbonated. This brought the old school noble hops paired with golden promise for a light affair that wasn't light on the citrus bitterness and mildly tart.

Format could be nicer. I could pick up a 4/6 of these once a summer. Enjoyable.

The colour is yellow-amber (15 EBC), the liquid clear. The three finger head is airy and yellowish. It sinks slowly leaving some lacing.

The smell is dry and malty with fine fresh bitter flavours. Minerals, marmalade and hints of cedar wood. Some British hay-ish hops flavours.

The taste is light and malty, but it is not very sweet. Hints of yeast, peaches, hay and a light and smooth bitterness. Light to medium body. The aftertaste is smooth and balanced. Some exotic fruits: Green and ripe bananas, peaches and biscuits. The finish is mild with some fruits.

The carbonation is light to medium, the bubbles small. The liquid is light.

Light and refreshing, almost as clean as a fine lager. I like.

A: This beer is clear golden with a large, almost unbelievably thick white head. Dissipation takes a while, and leaves rich lacings.

T: Sweet, bready malt. Floral hops brings fruits; oranges and pears, even some red apples. Bitter hops, but kind of in the back.

A weak fruity smell, oranges, pears and some grass.

A nice British Pale Ale, not extremely much summer to me, can be enjoyed year-round.

A Fullers I've not had! Awesome.

Nose is sweet biscuity malt a bit like buttered White bread. A gentle background of green grass and pepper hops.

Feel and flavour live up to the name. Silky smooth, medium light body, sweetish bready malts with light bittering and peppery hops. Honey and lemonade. Shandy-esque. Cask diacetyl butteriness in the mix is complimentary. While not one of the best Fullers range, it is still unmistakably Fullers and dangerously drinkable.

Nothing interesting but definitely one to go for on this warm London eve and definitely on to convert your lager drinking mates over from the 'dark' side.

Yellow beer, with a degree of haze to it, producing giant soapy head. Aroma was lemon fresh, but not Pledge (tm).

An enjoyable degree of bitterness in a summer ale. Wish more summer wheat beers had this. The hopping is light, but the malt is light enough to allow the hops to be noticed, even if coming nowhere near prominent. Might get the bitterness from the lemon aspect more than the hopping or yeast strain. Maybe some honey in there. The hops are prolly Kent Goldings or Saaz. Basically, the lemon, bitterness, hopping and carbonation all produce a quality summer beer for the light hearted super hot days.

Price is average, drinkability is good, but I've never seen this in a 6er, which is a negative.

The white fluffy head disappates quite quickly. Pleasant yellow straw colour. Modest carbonation. In many ways, it is closer to a lager, but much less fizzy than most. I have been a fan of Fuller's beers for years, and have never tasted this one before. It is my least favourite Fuller's beer. Having said all that, it is aimed at the summer BBQ in the sun market, and is much preferable to the macro lager swill one normally finds at such events.

Sunny canary yellow with a slight haze and silky carbonation that cascades softly in to a meringuey-white head with very good retention. Mild and malt-forward nose, buttery and biscuity and pleasant, but one-dimensional. A tiny zip of floral hops adds some spice. The flavor is toasty, nutty, and caramelly with a strong topnote of cider-like apple juice, fruity with an edge of honey. Clean and dry with a hop profile thinner than fishing wire. A bit soapy. To be perfectly fair, this is not that refreshing, as the pump handle boasts - the cask mouthfeel just can't compete with forced carbonation for pure, crisp refreshment, I'm afraid. It is satiny smooth, sure, but in my opinion, a beer's gotta have a bit of effervescence to be really refreshing. Good stuff, but not really worth a second pint. Not in this heat, anyway.

500ml brown bottle presentation, bought at 80 pence only at the Sainsbury's. supermarket when it was on sale. 3.9%abv., BB 25/06/07, served cool in a straight imperial-pint glass.

A: pours a dark straw colour; a moderate layer of fluffy white foam dissipates slowly... on top of gentle carbonation.
S: light-textured biscuity malts hand in hand with a refreshingly sweet honeyish, sweet citric syrupy and mashed pea-ish backbone; Saaz' grassy note stays firmly behind, but not as assertive as a full-bodied Czech lager nor a hoppy English Golden Bitter. Pretty one-dimensional.
T: a slightly savoury-sweet yet feather-light flavour of wheat malt and pale malts upfront, decorated with a dryish citric bitter edge, some hay-ish, grassy taste of Saaz hops, and a faintly honeyish note... leaving a neutral aftertaste with bits of dryish-mouthfeel of hops yet going slightly watery in the end...
M&D: the carbonation is spritzy, not intrusive nor soft, but the palate doesn't hold too well as it goes; overall this light-bodied golden ale lacks a balance b/w of malts and hops, nor is there a clear theme featuring anything at all, thus making it a rather uninteresting brew if compared with the lately-issued Discovery, Fuller's other Golden Ale--it's rather like a bland forebear of Discovery really. All in all, this is by far the least impressive offering from Fuller's that I've ever tasted. Not a terrible beer, but certainly not living up to Fuller's usual high standard.

tried this at the Fuller's brewery, this review is from notes.

A pale straw color with a bubbly shortlived head and some respectable lacing. The aroma is of floral hops and a soft maltiness. The taste is very sudued, with a mellow hoppiness (some fresh mown grass and herbal hops?) and an understated biscuit maltiness. There is very little bitterness here. The tour guide said this beer is hopped exclusively with Saaz hops which might explain the mellow hop flavor. The body is very light and the mouthfeel is rather watery. Not the best Fuller's offering I tried but still better than Golden Promise or 1845. A little bit too light and bland.

Taste, dry and light, as it is a summer beer the abv is very low, goes down very easy, slight hop bitterness on the finish

All in all a fairly good ale, good for hot days outside

Pours crystal clear yellow and golden color with a big white "soapy" head. Few tiny spots of lace on the pint.
Aroma of grain, light citurs, grass and some pale malts.
Flavor was sweet but plae malt with a heavy dose of light flavored grain and soem lighter yet, sfot lemon and lime notes.
Mouthfeel was slightly sweet and grainy and finishes with a lightly spiced and citrusy hop end.
Drinkability was decent but sweetness was a little bit too much.

Pours a bright golden honey colour with a big white head, that settles to a few millimetres thick throughout the rest of the pint. Leaves little rings of lacing down the glass.

Aroma is really malty, with a slightly cinnamon and nutmeg hit to the hops. Lemons then follow, with a hoppy end.

Taste is malty also, with spicy hops, citrus flavours, and a complex but overall hoppy aftertaste.

Mouthfeel is bubbly and refreshing, and it drinks very well.

Highly drinkable summer ale from Britain. Pour bright gold, almost yellow. Very little foam that dissipates to a light but rough carbonation which could be the fault of my glassware. A fresh malt aroma with just a tinge of floral character I suspect is from hops. A clean tasting beer with hint of lemon on a backdrop of very light toasted malt. Very smooth and clean, a very quaffable ale. There's a bit of an unpleasant bitterness, again this could be because of a dirty glass. Overall a very clean, drinkable summer ale.

Its been almost two years since Ive sampled, or even seen this beer at the package store, and I look forward to its crisp and fresh taste.
Clear gold in color, the head is off white and modest in size with a decent covering sheet of lace. Crisp and fresh the nose, mostly malt and as with the start lightly sweet, top lean in feel and the finish sparsely carbonated, the hops adequate, dry aftertaste, but a bit less than I remember or my notes indicate, still quite quaffable.

2002 release. Well, it's finally starting to cool down here in Arizona, so I thought I'd finish this off before the weather totally changes. Pure golden and crystal clear. Pours a head that quickly turns into a rocky and lacy mass of bubbles, and then to a thin lace. Not much in the nose, mainly grainy malt character and a touch of citrus from the hops, even a little banana. Extremely refreshing taste that's easy on the palate, yet not boring. Grain and bread-like malt alongside citrus hops, just like the aroma. Light body. Well balanced and definitely aimed to refresh. Great session brew and a wonderful thirst quencher.

A nice refreshing and "different" offering from Fullers. Very lager like golden straw, head was decent but went away almost totally in the end. Good lace was left. Nothing really stood out for me but it had the English smoothness that I like. A very good beer for the now two weeks of miserable heat I've had to endure.

Quite a creamy looking head over a deep gold liquid, hoppy aroma, slight hints of honey in there aswell. Creamy mouthfeel, slight sweet start, good hop bitter finish, which i think saves this beer, quite refreshing. Very good on draught.

Advertised as a light-bodied and flavored ale suitable for hot summer weather. It is an interesting beer, as it is more like a lager, even a pilsner, in flavor and body, yet it was not thin or watery. Nicely hopped with a pleasant, clean finish. A nice change of pace from other brewers' summer varietals, which are often a wheat-based interpretation.