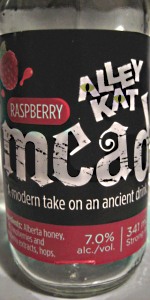 A- A watery pink color, with a soda like head.

S- Sweet, with a hint of alcohol.

T- Not what I would call a "beer taste" but, it's decent.

M- Does not leave much in your mouth as do many beers. I was expecting to have a layer on the inside of my mouth, but it turned out to be a disappointment. Very very carbonated sort of like your common soda.

D- Not one to drink continuously, but to have the occasional one here and there wouldn't be too much of a task.

S fake raspberries and some honey with a hint of booze

my girlfriend likes these so she can have the rest of them, something different but nothing special

Pours a very pale pink with an incredibly small, fizzy head that disappears almost instantly, without any trace that it ever existed.

The aroma is of raspberries. It smells somewhat artificial but, according to the packaging, Alley Kat uses real raspberries and raspberry extract. Maybe there is some artificial flavouring added, as well, that causes the chemical ordour?

The taste is of raspberries and honey, unsurprising, given that this is a raspberry mead. The initial taste is clean and refreshing, but there is a strange after taste that lingers a bit too long on the tongue. It's the taste of honey, but also something else. Again, perhaps a hint of artificial flavouring?

Mouth feel is very thin at first, with a thicker, syrupy feel that stays in the mouth after swallowing. This thickness is a bit distracting, and detracts from the drinkability somewhat.

Overall, Alley Kat Raspberry Mead is an OK braggot, but it's not great. However, given how limited the selection of mead is in most markets, it's still a welcome addition to the local liquor store.

This braggot pours a very clear, very pale orange, with a pinkish tinge, and a few fingers of bubbly pure white head, that disappears in a blink of the eye - there is no evidence that it ever existed - this is one uncarbonated-looking beverage. It smells of raspberry mush, as my mom used to call it, the mess you got when preparing the fruit for the eponymous pie - sweet and acidic, it that distinct way that these kind of berries toy with one's senses. The taste has more of a medicinal flavour, the fresh raspberry intensity overshadowed by a cloying, acerbic, metallic essence that doesn't let go. There is a nice honeyed sweetness there too, but it is mixed up in the other strange flavours. The carbonation is quite mild, the body solid, in a mealy sort of way, and it finishes sweet, fruity, and boozy.

This has the potential to be a nice summer patio quaffer, but the drinkability suffers in its texture and the off-flavours after the initial raspberry goodness. It's a shame and wonder, as Alley Kat's dexterity with the raspberry was proven beyond a doubt with last summer's Razzykat seasonal.

The Rasberry Mead, being Alberta's first production mead, is a fruit flavoured Braggot style mead made with a blend of raspberries, honey, malts and a touch of hops. The Raspberry Mead pours a slight pink with Champagne-like carbonation. This delicate balance between its natural sweetness and fruity flavours will definitely make it a favourite of everyone's."

I was a little unsure whether this was a true braggot, but after checking out the BJCP classifications I can say that the brewery's claim is a good one. Doing some further reading online I can also conclude that the Weihnachtskatze should also be classified as a braggot (apparently this one was an explicit mix of beer and mead). Anyway, I've used the BJCP guidelines in rating this strangest of beers because its a style that deviates from the norm.

Honey coloured pour. Whatever head there was disappeared in an instant. BJCP talked about clarity, and this is good, but it hardly radiates. Aroma of sweet raspberry puree overpowers everything else. Sweet raspberry upfront in the flavour, which then takes a backseat driver approach in the aftertaste as a pale malt does its best to make an appearance, before giving way to a nasty moonshine style finish. Completely unbalanced, overly sweet and hugely apparent alcohol. Body is a bit lighter than I expected, but still has a hint of syrup to it, while carbonation is medium.

The alcohol finish in this is far too harsh, and this is a severe disappointment from such a capable brewery. At least I finally get to try out a rare beer style. Here's hoping my next kick at this bucket is a better one. Right now this reminds me of how my brother-in-law mixes his moonshine with crystal light.

Thanks to Alex (voonder) for helping me get closer to 103 styles!


Raspberry Mead from Alley Kat Brewing Company
Beer rating: 2.97 out of 5 with 5 ratings