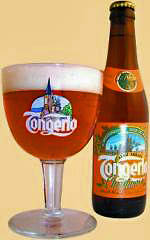 Smell is yeasty and citrusy with notes of banana, apples and a hint of spice.

Taste is yeasty and sweet with peppery notes of rye and well disguised spiciness. Some phenols and esters, but it's all mellow and balanced.

Mouthfeel is medium with sparkly carbonation.

Good caramel presence with a spicy character. This one goes along the classical belgian christmas ale. It's enjoyable enough but not one you'll remember for the rest of your life

From Uvinum. In Tongerlo chalice. Playing South Park The Stick of Truth.From Uvinum. Not much spicy like in a Christmas beer. More like a tripel but with less alcohol an sugar. Overall pleasant and easy to drink

A solid, thick, spicy Belgian pale that I loved!

Good for drink one but no more. Nothing exceptional

Pours a hazy, maize color. 1/3 inch head of an off-white color. Great retention and great lacing. Smells of sweet malt, pale malt, hint of spice, hint of citrus, and a hint of nut. Fits the style of a Belgian Pale Ale. Mouth feel is sharp and crisp, with an average carbonation level. Tastes of slight sweet malt, pale malt, metallic notes, and a hint of nut. Overall, good appearance, but aroma and body are oddly 'nutty' and almost lean towards being 'butterscotch-like'.

Had this beer at the Essen Christmas beer festival, last sunday. I enjoyed this festival because of the wide variety of Christmas beers.

This one came out of the bottle into a tasting glass. The fluid is darkred to brown, like the Palm beers. Nice head, broken white which disappeared fast. Good carbonation. Caramel, good and dry smell.

My green labelled 33cl brown bottle claims 7.5% ABV and had a best before date of 25 Mar 2011. Poured into my Westmalle chalice, all the sediment appeared to stay, stuck to the bottle bottom.

The beer was an amber colour with an off-white head which started fairly thin, but stayed for most of the review.

The smell was of treacle and yeasts, a bit on the sweet side then!

Alcohol is the main ingrediant within the taste and flavours, taking over anything and everything else. No depth of body, or creamy richness for a Christmas beer no matter what style.

Not overly impressed, far to much alcohol and not enough substance from any other components.

Good beer overall. Nothing really special, just solid good..Poured with an off white foamy, frothy head that settled down shortly and some lace. Color is a clear medium amber. Aroma is yeasty, malty, and spicey. Flavor is similar with a tinge of sour in the background. A little sweetness, but really almost dry. Great body and excellent carbonation. A few hints of alcohol, but that's fine. Nice finish. Could easily have another. Have to be careful though.

Pours a hazy, murky, red, orange, brown, color with a light tan head that leaves thick spots of lacing around the glass.

Smells like christmas, kind of a evergreen tree smell with hints of spice.

Taste right up front from the beginning, starts with kind of pine notes with spices and hints of orange dry yeasty finish, with notes of caramel throughout.

Over all a very good beer, and you can bet I'll be drinking this seasonal brew for as long as it's in season. Might even stock up for later.

Pours slightly hazy golden with lots of large carbonation bubbles and rather large head that soon decreases to nice dense layer. Light patchy lacing. Aroma is light earhy, some orange, very limited spice. Taste is noticeably sweet and spicy with some bitterness, soft yeast. Alcohol could be felt in the mostly sweetish aftertaste. Body is quite light with lots of mouth-filling carbonation bubbles.

Anyway; poured the brew into Leffe glass, adding the small amount of yeast sediment. Appearence was a nice blonde with an orange hue and some haze, but not cloudy. A decent off-white head lasted and left lacing.
Smelled a little weird; first off a pleasent enough malt/hops combination but a strange, slightly off-putting rusty smell developed. The brewery says brew has a hint of vanilla in the aroma, but I did not sense it.
The taste was reasonably good, improving as it warmed; some caramel and a touch of an after tang that was not unpleasent.

Not a bad brew, but I would not seek it out. Interesting.

A golden, orange beer with a small head and moderate amount of lacing.

Smell is spicy with hints of coriander and clove. The malt is light and just light malty.

Taste is spicy with coriander and clove, also yeast-like spicy with an estery profile. The malt is just supporting the fruitines and is a little biscuity and doughy. I can't really detect a big difference between the blond and the Christmas version.

This beer has a nice foggy golden-orange colour. It also has a nice compact head.
I had this one in a Bush tulip glass.
Smells like fruity citrus, mostly oranges. Malt and a soft sweetness like honey.
The first taste was less convincing. I was overwhelmed by a strong oxidising taste that opened up my nostrils. Furthermore I could make up a strong malt taste with some honey like sweetness. This beer does warm the body. As the beer gets warmer, the taste also gets dryer. But with a sweet and yeasty aftertaste.

The Tongerlo beers have never been my favourite and this one isnt going to change that.

Appearance: Bubbly amber gold hue, very presentable lace. Most of the sediment stayed behind as the beer was clear in the glass.

Smell: Tangerines. A bit earthy with a light honey malt aroma and fruity esters, sweet to the nose.

Taste: Sweet with a juicy middle of fruity esters, pale malt sweetness and a twang from the yeast. Alcohols warms the body a bit as the earthy yeast comes back for a second round with a snap of hops that help keep things in balance.

Drinkability & Notes: Very thirst quenching as it goes down too easy, beers like this make you fall in love with the idea of Belgian beer all over again.

Tongerlo Christmas from Brouwerij Haacht NV
Beer rating: 81 out of 100 with 33 ratings