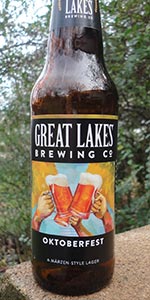 Notes: Prost! Our take on this classic German style is a celebration of maltiness— packed with rustic, autumnal flavors to put a little more oomph into your oom-pah-pah.

Über smooth with vibrant malt flavors and a festive flourish of noble hops (lederhosen not included).

My favorite Oktoberfest to date. Extremely well balanced and pleasant all around. Malts are forward without being sweet or overbearing.
Very easy drinking.

Smell is light caramel , with a little "fresh" malt aroma.

Taste is caramel, lighter and less sweet than in the aroma, toast, some Noble hop spiciness, and a brief, slightly sweet, honey/floral(goldenrod)/apple note at finish. Moderate pleasant bitterness that comes in mid-taste, accompanying the hop flavors, and lingering past finish.

Overall, a pleasure. Nice balance between the sweet, the spicy, and the bitter elements. One of the better Oktoberfest biers I've had this fall. Only got a single, but wishing for more. :)

T: you get hit with some subtle lager spice upfront followed by a huge punch of caramel. Fresh bread and a slight herbal hop note. Finish is Breda and sweet

M: fuller side of medium mouthfeel with medium-high carbonation

O: decent example of a sweet Märzen, but I wouldn’t put this as a benchmark or “great” example. Easy to drink, and would work real nice in a liter glass

Poured from 12oz bottle into .5L stein. Clear bright orange/amber. Off white head falls to a cap. Looks pretty still. Smell of bread dough, malt, and spicy hops. Taste follows nose with a deep, malty, rich, doughy flavor. Sweet up front, but not overly so. Bitterness creeps in and spiciness from the hops finishes it up. A bit of a black pepper kick in the middle. It's pretty flavorful and keeps me interested throughout. Feel is medium with a hint of carbonation to keep it from seeming flat. Overall, I enjoyed this beer and would seek it out again. One of the better American O-fests I've come across.

Decent Marzen. Looks the part pouring golden amber, clear except for some chill haze and showing visual carbonation. The modest off-white head has moderate retention and tries to leave some lace. The nose features spicy hops and cracker and biscuit-like malt, but is subdued. Flavor is toasty and caramel malt balanced by herbal and spicy hops. Sweetness and bitterness are both low, finish is dry and mildly bitter. Body and carbonation are both in the neighborhood of medium with a crisp feel and a warming finish. The approach seems to be the less malty American style Maerzen.

A hearty Oktoberfest.
Very well done.
It has a bit more of a Hop bite than I would like, but other than that probably one of the better U.S. renditions of the style.
The smell is of malty wort with a floral bouquet background. Absolutely scrumptious.

There are Oktoberfest beers which have a track record for us because we drink them year after year. This year, several if those presented a better than perceived average edition, while others fell behind or continue to disappoint. Among the beers which made a leap forward was Great Lakes Oktoberfest. A subtle step forward, but if you‘ve been a solid contender for many years, improvement isn‘t easy. Yet, Great Lakes did it. A Märzen style, which puts an own spun in an otherwise pretty clearly defined gammut. Good malt, easy on the sweetness. Spices without the overwhelming richness. Nice hop aroma without abandoning the expectations for the style. If there is any criticism I would say: One of the characteristics of an Oktoberfest is the desire to have another and another. With Great Lakes, I would probably not have as many. Great beer, though.

Pours a light amber with white head. Some graham cracker crust aroma, but it isn't particularly strong. There's a lot of Honey Maid graham cracker/bready character. Honey wheat bread. It's dry with some semblance of richness and enough hop character to break that up. Decent American Oktoberfest.

Great Lakes always provide a good beer. This Octoberfest has real malt taste up front and the hops on the back end. Of the American Ofest this is maybe the best I have had this year. It certainly meets the style for malt and body almost more body the most of the typical American items. What it does not have is the distinct malt taste of the German Ofest from Bavaria but not a bad thing...........just different. It is drinkable but with plenty of taste and punch.

Burnished bronze color, but bright gold with a backlight revealing the rising bubbles. Topped with a tall, very thick and sticky white head with excellent retention; it just gradually sags a bit leaving strings of lacing.

Taste has the dark fruits, and the sweet caramel, but is also quite bitter for the style. In fact, the bitterness tends to dominate. Not like an IPA, for sure, but it is noticeable and front and center throughout, from the initial taste to lingering into the aftertaste. The flavor underlying the hops is as expected for the Märzen substyle; malty, bready, caramel, and (until the bittering hops knock it back down), a bit sweet.

The feel has a moderate body.

Overall, this is a good Oktoberfest-Märzen in the American style with greater contribution from the hops, that is, the bittering aspect of the hops.

Clear amber appearance with a small white head and a fair amount of lacing. Enjoyable aroma of caramel, bready (like a soft pretzel), some soft fruit (plums sticking in my mind) and a touch of honey. Sets the stage for a similar taste experience with distinctive maltiness and a modest hop presence that is fruity and spicy. Smooth, rich aftertaste that lingers.

After reviewing 4 other Marzen styled beers I am getting an understanding of what to expect. This beer is coppery gold but I think lighter in color than the others I've sampled. A head is formed. It is also lighter in color and dissapates quickly. All I can say is the smell is spicy. I'm not smelling nuts or grass or even malt. I like the flavor of this beer but there is an aftertaste that is different, Of the 5 I've reviewed this (even though this site has this beer rated as the highest) beer comes in a respectible #2. I will of course drink all the marzen beer but I'm not a fan of the style.

The ultimate American Oktoberfest beer! Wish they distributed west to Seattle. Used to relish the release every August in Chicago and the Midwest. Such a delicious carmely, malty, bready and flavorful Marzen. The best of the Midwest and has more flavor than the original Munich 6 or Ayinger -- which are all delicious

Almost perfect. Deep amber. Thick lacy head. Warm malt and caramel nose. Tasty flavors match the smell. Rich mouthfeel. One of the best American Oktoberfests. Period. 2019 might have been just a bit more roasty but 2020 is mighty fine too

Pours a light copper with a noticeable golden tint. Very thin white head that quickly dissipates, leaves almost no lacing. Mild carbonation with caramel, grains and a mild breadiness up front. Finishes sweet on the malt with just a very minor kick of hops. Goes down very smooth. One of the best American versions of the style.

Taste: sweet, caramel flavor upon first sip, which changes to toasty and biscuity malt flavors after warming up on the tongue followed by a slight alcoholic warmth. Retronasal enters a hop spice

Overall: Great Lakes Brewing Co. has done a pretty good job with their Oktoberfest/Märzen-style lager. I believe this beer is relatively close to style; the only things that really detract from a higher score by me are the lingering bitterness that stays well after you take a sip and the alcoholic warmth notes I get are quite high for this style

First Oktoberfest of 2020 poured into a pint glass from a bottle with an Enjoy By date of 10/10/20. Beautiful copper color with a thin head & thin lacing. Smells rich of toffee & brown sugar/caramel. Taste follows the smell and the sweetness & absence of bitterness is a nice change of pace. Look forward to a lot of these and other Marzens/Festbiers as the season approaches.

A little dated from August 2019. Hazy copper color with a decent off white head that leaves some lacing in my glass. Caramel, nutty aromas. Grainy, nutty and caramel flavors, finishes clean and dry. Medium bodied with a crisp and carbonated mouthfeel, a well done Oktoberfest, I like the high ABV, adds to the experience. This will be a regular in my fridge come fall.

A decent Marzen. Worth quaffing.

Appearance: Pours a beautiful, deep, but bright amber color with a small off white head. SRM of 13. (4.25)

Aroma: Moderate aromas of bread, grass, and earthy honey with some flower and possibly caramel and bread spice. Some clean lemon soap. Hints of cherry too. Tons of German bread, but the aromas are mild. (4.00)

Flavor: Bready and grassy hay. A definite nice hint of earthy German flower and farm. Finishes very bready. Mostly dry for the amount of bread, but there is a bready sweetness here. There is a rye, cherry and red apple flavor here too. Tastes like a baking bread on a German farm on a rainy day. (4.25)

Overall: A very bready, full, and American Marzen style. It has a rye, red apple and cherry note too. Nice bready flavors with some hints of flower and cherry spice. Exactly what I'm looking for in an Oktoberfest Marzen. Not overpowering but captures the right flavors. It's still slightly heavier bodied and stronger than a traditional festbier, but one of the best American versions of the style. Very similar to Founders' Oktoberfest. This one is good, and It's bread spice in a glass. (Final Rating: 4.13)
*Compare to any festbier*

Oktoberfest from Great Lakes Brewing Co.
Beer rating: 91 out of 100 with 2468 ratings