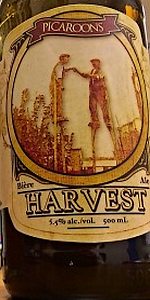 A- Pours an Orange Amber with a thin, whispy white head. No lacing on the glass.

S- Sweet caramel malt and a light hoppiness that barely cuts through.

Got on a trade with Curtis! Thx Curtis!

T- 4.0- Pretty nice malty backbone with hops to go. Not a lot but it's there.

firstly, this beer is hardly retired, locally they stock it at beer stores.
its seasonal, but last year was very big for picaroons, and they expanded the line.
or so it seems, anyhow, this beer the "harvest" ale, had three or four types under the title "harvest ales", titled , Cascade , laven-hop, and one other i cant recall.
anyways. the one that is commonly found is "lavenhop" and its name come from the
type of hops used in it. they are all titles based on the farm that they grew the hops on.
sort of so you can basically trace back locally who was the creator, brewer, ect.
neat idea. ive had them all, but lavenhop seems to be the only one still around.
in review:

appearance:
dark , an orangey gold, i find the format common from this brewer, very much an ale.
traditional. a thin 1/4 inch of white head, middle carb. epic lace for the size of head.

smell:
this is where this ale gets really intricate, on the first bit its reminding me of blueberries, over powering on the fruit side, but still appealling, and i dont often enjoy a sweet type of beer, this nose isnt a representation of the taste, just augments its already complex and very appealing qualities. also hints of grain, the standard picaroons smokey malt, with notes of fruit all thru it, very nice nose.

taste:
a bit soft on the carb it seems, maybe its the fact that it was bottled in october or so, it now being febuary, but conditioning is usually an added up for points, this, not so much, i find it was better when the fresh hops were more evident, still, it has that same "autumn in new brunswick" taste i cant discount, its fruity nose makes me expect it to be following in taste, but its more malt, and more yeast. seems its slightly lacking on the taste side, but otherwise its very good. and dont get me wrong , this is a fine ale, if i wasnt spoiled by the cascade version id have reviewed it higher in taste as it is really like nothing else ive had. at all. once again that blueberry hint is very present. but its more of an afterthought. i may be confusing lavender for blueberrry also. either way. i find it complex. and almost confusing. in a great way.

mouthfeel:
a bit slick on the head, not to the point of oiley, but slick.
not much in the way of carb, like a traditional ale is expected to be i suppose.
goes down nicely, leaves a slight dryness. slightly gassy for an ale.

overall:
not the best offering from picaroons stable, but a quality ale nonetheless,
the seasonal was probably more of a test run to see what local hops, and local grains were capable of creating with a bit of room to play around, this fruity ale is a bit offputting if you arnt expecting it, but after i tried it a couple times i understood what they were going for, and now im glad to see it pop up on the shelf every so often. I just wish the cascade version would show up again, the hops in that ale were just perfect. this is a runner up in the same style. but dont get me wrong, if you are lucky enough to have it outside of our city id be surprised, but if so, try one. like I always say about the picaroons offerings, try it and see. great stuff.

Ok, this is my favourite of the Picaroons' beers I've had. It is a sesaonal brew that is very much half Irish red and half bitter - if that makes sense. A dark red colour with beige/brown head. Malty in a very pleasant way. Nice light aftertaste. Smooth brew. I wish I could get it closer to home. I'll have to try this with food next time I'm here. No unpleasantness about this beer. Its a good solid pub brew. Ya, did a good job with this one Sean.