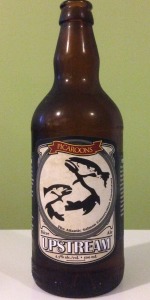 Upstream Ale has the polish of fine dinnerware and the luminescence of a light bulb. Its deep golden tone has an orange tint and, curiously, is clear around its edges but densely clouded in the center. Tucked under its white encasing, it looks something like a hard boiled egg.

Generic golden ales such as this tend to appease only two types of drinkers: casual beer drinkers (those that don't really care for it and enjoy the plainness of the style); and experienced beer drinkers (connoisseurs that can appreciate the integrity required from a style of such simplicity).

It's ironic that these two (very different) groups of people can appreciate styles like Blonde Ales, Kölsch, and Pale Ales for their plainness and simplicity while all others are dismissive of and unimpressed by them for the exact same reasons. But indeed, there's nothing disagreeable about these beers and the best examples display beer's basics at their best.

Picaroons never defines exactly what style this is but regardless, in both aroma and taste it embodies the cleanest and most fundamental elements of beer's ingredients, including a white bread-like maltiness, a lightly grassy hoppiness, a whiff of baker's yeast and, to be both frank and fair, a lot of water (it does after all make up 95% of the formula).

Upstream Ale is intended to promote the conservation of wild salmon in Atlantic Canada. A golden, light-bodied ale like this is likely to have the widest appeal and hence raise the most money; it's the most logical thing to release. If you're a discerning craft beer geek you might want something a little more engaging, but hey, we can all agree it's for a good cause.

"This catch and release brew is here for a limited time only to help the Atlantic Salmon Conservation Foundation promote enhanced community partnerships in the conservation of the Wild Atlantic Salmon and its habitat in Atlantic Canada and Quebec."

So says the bottle. A fraction of the proceeds from the beer go to helping salmon conservation. There were also t-shirts available which supported the same cause. They released this at the end of last summer, I just so happened to find this in the back of the fridge tonight.

This is a pretty light beer, a lot like their 506 Logger, or Melonhead without the watermelon. Light golden colour, a whole lot of head (probably has to do with the age) though 1/2 finger head sticks around surprisingly. Smells a lot like a lager, a bit of yeast, some light fruit maybe, but it's subtle. Light tasting, straw. Overall this is a great summer beer alternative to an adjunct. Easy to drink, but has more taste than a domestic. I doubt they'll release this again, at least not under this name. Picaroons will probably merge it with the 506 or another Kolsch they come out with.

Upstream Ale from Picaroons Traditional Ales
Beer rating: 80 out of 100 with 10 ratings