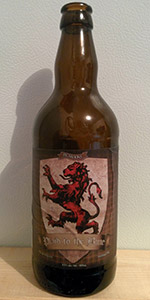 First time I had this beer I was unable to finish the bottle.

I am not a fan of the high IBU taste.
But I have taste it again after having more than 80 different beer in the last year and I have appreciated this one. The IBU content is just appropriate.

My tasting chart start to change a little bit. I don't like the hop taste, but it is less bitter after a year of drinking high content hop beer.

Pale in colour, with lots of bubbly white head. Smell is sweet like honey, with herbal and floral notes. Taste is also sweet, with almost no bitterness.

A- Golden and Clear. 1 finger head that works down to a thin film quickly. Minimal lacing on the glass. Extremely reminiscent of a macro Lager.

S- Butter and Caramel. Smells like a fine dessert.

T- Butter and Caramel. Nothing to indicate the presence of heather. No spicy notes to be found.

O- Plaid to the Bone is a pleasant Ale that is a refreshing change from the heavily hopped brews I usually consume. It's got loads of pleasant sweetness without the hop-bomb to go with it. Although I can't say this will be a regular for me, it is a good brew and I could certainly see this as a summer refresher.

Bottle from the brewery store in Frederickton, shared with the BFD crew.
Pours a fairly clear medium golden color with a decent off white head.
Aromas of butter and toffee dominate the aroma and flavor. Light burnt caramel flavor. Little to no spice. There's supposed to be heather in here but honestly there is so much diacetyl in my glass I can't find much else. Not for me.

Call me crazy, but I was expecting a beer called "Plaid to the Bone" to be red, or at least be checkered in amber highlighting. The ale in front of me, however, is a hazy banana yellow in colour. With its foamy white head it has the appearance of a Kölsch or a Pale Ale. It certainly doesn't look like something inspired by an ancient Scottish brewing tradition.

The three words that best describe this aroma are as follows, and I quote, "Stink, Stank, Stunk!" Wafts of leather, wet socks, and sweaty cheese point directly to the culprit: Brettanomyces. This funkiness would be most welcomed in an intentionally soured ale, but it's likely to sign of an infection in this example.

Not all is lost, however; surprisingly, traces of the gentle heather flowers can be appreciated from beneath those wild barnyard notes. They're even easier enjoyed on the palate where the funkiness quickly fades to black and allows a bready, sweet malt to set in, and soft floral flavours to mingle with it. The aftertaste is like dry, plain soda-crackers.

Any tinge of tartness becomes almost entirely unnoticeable after a short time; the beer is perfectly drinkable. Enjoyable too, but it certainly doesn't leave one wanting for nothing: more heather would have been nice. I was also expecting something a little less 'ordinary' considering the beer's limited, special release status.

Plaid to the Bone is pretty much just all skin and bone. It has a pale, frail, and plain profile that does no justice to its special ingredient nor the fantastic brewery that made it; hopefully Picaroons comes up with a different recipe for 2014 because they are capable of much better than this. This may be the first and only Picaroons beer I didn't truly enjoy.

500ml bottle poured into pint glass. Very clear and pale with a lot of carbonation. Nice aromatic bouquet on the nose with a lot of herbs coming trough. Really pleasant flavor, well balanced and different because of the lack of hops. Really nice summer beer