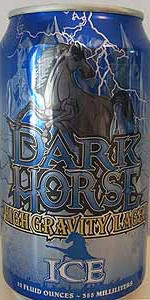 Next door neighbor often makes trips up to his secluded cabin in northern Michigan. Whilst on the way,he always stop by this small off beat general store about fifteen miles west of Saginaw in the sticks.

Why? Apparently the owner sells " mixed packs " of 40 random canned beers ranging from malt liquors to cheap Czech pilsners. Said neighbor apparently always buys three of the poorly duct taped boxes, drinks them and brings the remainder home with him.

Upon arrival, he presented me with a few of the stragglers and this is one of them.

Pours a dehydrated urine yellow with a two and a half finger of bone white head that retains well into the drink. Carbonation is high and a fair bit of lacing and stick remains after the glass is empty.

Smell reminds me of your typical generic American swill with a...dare I say it...touch of tart lemon and fusel alcohol? Wow.

Taste follows suit completely. The fusels stay rather tame which is unexpected.

Feel is moderate with a high carbonation level and a decent creamy factor.

Overall this is actually a fairly acceptable malt liquor. It doesn't have the overbearing corn or fusel levels found in many other high ABV examples. If this were $15 a 40 box around here ( or so he says ) I'd probably give it a whirl from time to time.

Dark Horse High Gravity Lager Ice has a medium, white head, a mostly clear (but, with noticeable fine sediment throughout, upon closer inspection), bubbly, golden appearance, and even some lacing left behind. The aroma is of store-brand, cheap grape soda and wet grain. Taste is of that, too, with an unpleasant, underlying tap water note. Hop bitterness is almost nonexistent. Mouthfeel is medium, with a chalky under-taste, and Dark Horse High Gravity Lager Ice finishes wet, sloppy, and gross.

Appearance: Mostly clear (you can almost see your fingerprints through the glass but not quite) golden body. The thin white head that forms as you pour it vanishes almost instantly. Obviously, there's no lacing left behind when there's no head to leave it. As this is probably consumed from the can 99.9% of the time I doubt it matters.

Smell: There's some sulphur in the nose at first whiff, and perhaps a slight bit of vegetal character as well. That dissipates quickly though, and you're left with a slightly sweet maltiness. No hops are present.

Taste: The taste is mainly adjunct malt. It's sweet but kept in check when consumed ice-cold. The alcohol is not obvious; and it helps to balance the sweetness. There's a minor bit of hop flavor to it, mainly at the swallow and in the burp. I'd call it floral but I think I'm getting that impression because they're combined with the sugary maltiness. As a guess I'd go with the cluster variety, but who can tell with so few in there. On the other hand, for an American malt liquor you don't really need them anyway, do you?

Mouthfeel: Medium bodied and surprisingly smooth. A lot of brewers keep the carbonation in their malt liquors on the lower end to keep it smooth, and to keep from bringing the alcohol forth. Well done.

Overall: As a malt liquor I have to say it's not bad. The appearance is a drawback, of course, as it's not up to par with most others on the market. And the initial off-putting aroma drops its score greatly, but I will admit that does fade fairly quickly. Flavor-wise, however, it's pretty good. I'd drink this before a "Hurricane" any day. And given the price (mine worked out to less than .40 before state tax), you can't beat it. The next time I go on a drunken, three day long fishing trip with my idiot friends I'll bring a case of this so that they don't drink my "expensive" craft beers just because they have alcohol in them.

All that really impressed me about this beer was the can it came in. I dug the design so i picked up a can and gave it a try. It's no different than Colt 45 really. Pretty poor tasting stuff. I was impressed at the ABV though. This beer is what college kids should instead of Coors, Miller and Keystone.

It looks as though I have made my bones on this site via my AmeriCAN Malt Liquor reviews which are (mostly) done in support of The CANQuest (TM). I was talking to the owner of Beaver BC in Beaver Falls, PA recently and the subject of "Broadway" Joe Namath came up. In a fairly well-replayed clip, Namath mentions "such a feeling of elation when we won [Super Bowl III]" and I felt that selfsame feeling of elation when I saw a sixer of this gem on the top shelf of my neighbor's cooler. Understand, I have a six pack shop right out my back door and I frequent them regularly so the prospect of a new CAN trips my trigger.

The Crack & Glug went off without a hitch and thanks to my custom inverted aggro centerline pour, I had a finger of foamy, bone-white head awaiting me. I looked away briefly and the head was gone! Magic. Color was a deep golden-yellow with NE-quality clarity and it looked as enticing as The Sirens did to Odysseus and his crew. The nose was that of grape bubble gum and suddenly, my ship was foundering on the rocks! "Oh crap, oh dear," I thought to myself. Mouthfeel was actually pretty full, dare I even say nearly creamy?!? The taste, however, reminded me of being on cleanup detail afterhours at a bar. Burnt tobacco, stale must, chewed gum and the olive juice in a Dirty Martini all came to mind as I drank this gem. Finish left me with a serious case of buyer's regret and I only paid $3.50 for the sixer! I am going to see of my next door neighbors (the ones who hang in the alley along the fenceline) would like to have the remnants of the six.

I bought a single 24oz can of this from Woodman's in Janesville, WI for a whopping 99cents in Fall 2010.

This can should come with a T-shirt that says "I drank Dark Horse Ice, and didn't die...yet." It pours a pale yellowish color with a lot of carbonation with a yeast like scent similar to cheap champagne. Upon drinking it has a weak lemon taste. Overall it has a very weak taste and not much better texture. This is beverage simply made for alcoholics needing a cheap fix or something that should be used in a dare. Makes Miller Lite taste like Dom Perignon.

Poured from a 12 oz. can. Has a pale yellow color with a 1/2 inch head. Smell is of malts and corn. Taste has a flavor of green apples, somewhat sweet, kind of an unusual flavor that grows on you. Feels light in the mouth and has average drinkability. Overall at $3.50 a sixer, not a bad cheap beer.

24oz can purchased for a whopping 89 cents

Light golden with a big fizzy white head. The smell is mostly sweet grits and slightly metallic. This brew is pretty watered down for a malt liquor, more like some cheap "ice" beer, sweet corn and a little bit of fusel alcohol funk. The mouthfeel is light and watery. This certainly isn't the most offensive brew out there but it doesn't really have and good qualities either. Forgettable.

Dark Horse Ice will be squaring off against Jaguar Ice in what might turn out to be the final Malt Likkapalooza (unless I can locate more of them, that is). What is it with malt liquor and animals? Bulls, stallions, cobras, jaguars... the list goes on and on. Since I could find out no information about this brew and had to add it to the database, one might say that it's the dark horse of ML XII.

Sweet corn yellow that is at least one shade lighter than the competition. The two finger cap is eggshell in color and is of *slightly* higher quality. Razor-thin edge to DHI due to a more appealing color and better lid-and-lace.

There isn't much going on here either. Although I have no idea on the ABV, it doesn't smell any stronger than Jaguar. It's a bit musky... and that's about it. Then again, no one who drinks this stuff on a regular basis gives a rat's ass about aroma.

Dark Horse Ice is too bland as well, which tells me that the ABV is probably no higher than 6.0%. The first mouthful seemed to have more gumption, but subsequent gulps fade away into nothingness without having made much of an impression. Actually, if the colors were closer, I might even think that these are the same beer. Same faint corniness, same weak hops.

This mouthfeel is no better. It's light (possibly light-medium) and doesn't possess many bubbles. That's probably a good thing because malt liquor burps aren't nearly as pleasant as hop burps. Now that mouthfeel has been assessed, can I finally stop sloshing this swill down my gullet?

Dark Horse Ice isn't a beer that I care to drink again, even on a bet, but it barely eeks out a victory in Malt Likkapalooza XII. It looks like today's dark horse won by a nose hair. Do yourself a favor and keep walking if you see this one in the coolers.