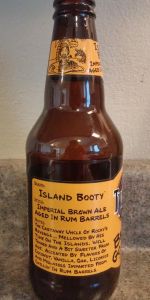 Notes: The castaway uncle of Rocky's Revenge... Mellowed by his time on the islands. Well tanned and a bit sweeter from age. Accented by flavors of coconut, vanilla, oak, licorice, and molasses imparted from chillin' in rum barrels.
View: Beers | Place Reviews
Reviews: 10 | Ratings: 31 | Log in to view all ratings and sort

This beer pours a deep shade of brown. Mahogany highlights are visible when held to the light. It is topped with an inch of tan head that leaves little lacing.

The aroma is cocoa and chocolate. Some alcohol notes from the rum are detectable.

The flavor has chocolate, fig, dates, and some spices.

This is a pretty tasty beverage. I think this is my first rum barrel aged beer. I am impressed.

Looooots of sugar, vanilla, and more sweetness. Dark molasses and more vanilla. Not getting much if any coconut or licorice, but this is definitely a delicious brown ale. Well done.

Thanks to the sharp eyes of my wife for spotting a couple lingering singles during our May visit to Madison. 12 oz. stubby with the trademark yellow label.

The pour is shimmering ruby, or maybe that’s my slavering anticipation. More barrel in the nose than is typical for the brewery with light notes of chocolate & sweet malt. Mostly rum. Not complaining.

Island Booty is like a rum-and-rum sandwich. Cool, spicy rum is run up, through, & past the each swallow. Providing a frame is the slightly sweet, slightly nutty base brown. Cola, vanilla/coconut. Rum mops up. Smooth, creamy, & drinkable enough for me to suspect a late addition of crack.

Delicious. This beer warmed me up on a cold, rainy night in Madison & it’s doing the same job in the comfort of my basement on a cool summer evening. Excellent beer, but I wish it weren’t vanishing so fast.

12oz bottle from the 2016 release. Served into a snifter glass.

Pours a dark cola brown body, mahogany hue. One finger white head, short retention time, no lacing. Smells of rum, nuttiness, caramel, a bit of toasted malt, touch of earth. Rum heavy, sort of like smelling out of a Malibu bottle but without the ethanol. Flavour is similarly heavy on the rum but no ethanol flavours or heat. Caramel, nuttiness, Candi sugar, moderate toasted barley from the base brown. Mild earthy bitterness. Very nice and soothing, somewhat complex but not boozy. Mouthfeel is medium-lighter bodied, lower in carbonation, drinks very smoothly with a nice rich toasted barley and nuttiness on the finish accompanied by a quick wave of rum sweetness. A nice rum complement to the base imperial brown; I think this suits the base better than bourbon.

Pours to a reddish, dark amber appearance with a two finger tan head. Smells nice with sweet vanilla malt, cherry infused coconut and maple syrup. Taste mirrors the nose pretty closely wth sweet vanilla, coconut, oak and caramel. Mouthfeel is medium and carbonation is almost non existent. This is yet another very tasty, well made barrel aged beer from Tyranena. Glad they fly under the radar - almost hope they stay that way too.

On tap at the source.

The rum flavors are fairly muted here. It has some coconut flavors and a lot of chocolate. Oak. Vanilla shows with toffee. Some caramel and nut flavors.

For the price, this is a nice beer. I'd drink this all the time if it was available.

Poured 12 oz bottle into snifter. Mahogany brown with a lighter tan 2 finger head. Abundant lacing and a thin cap. Aroma is sweeter with a nuttiness and some toffee, coconut. In the flavor I pick up the rum that is not over powering with a hint of coconut. It never is too sweet with the maltines and is balanced a bit by some nutty flavor. A nice smooth medium feel keeps it easy drinking. Another solid offering from Tyranena.

The rum isn't nearly strong enough to really make this a standout. It has got the same solid base as Rocky's so that's still enjoyable but the blended RR has more barrel flavor than this beer which I assume is 100% BA.

If it was a pricey bomber I'd be highly disappointed but you really can't ignore that this is a reasonably priced 4-pack.

A solid beer but not as good as Wrath of Rocky, which I assume is the same base beer as this but just aged in bourbon instead of rum barrels. Where this beer falls short is the rum is not as dominant as I had hoped and the taste just isn't quite enough. I also thought the mouthfeel was thin. That said though, Tyranena has been putting out some great beers lately and this one was still very enjoyable!

Aggressive hiss as the pressure cap is removed; poured into HF wine stem.

Appearance: dark mahogany brown body with thick cap of light khaki head. Very fine cap remains on the beer during the entire 12oz drinking session. Spotty lacing clings to the glass and light booze legs present on the side of the glass after taking a sip.

Smell: Really a fantastic nose on this beer! Roasted and nutty malt. The base beer is well represented and the barrel notes have near flawless barrel integration happening in this beer! Barrel notes are very vanilla and coconut centric; a hint of rum spice and lots of dry oak character. Also smell some caramel and butterscotch. Hope the beer tastes as good as it smells.

Taste: The balance here is pretty exceptional, but the rum barrel tastes a little bigger than the base beer does. Initial flavor tastes like cream soda with a splash of premium / mellow rum and a hint of hazelnuts. In the middle the coconut, caramel, and vanilla that begins to build and you start to get the dry oak barrel presence. The finish is the best part...you get a light bitter bite that is also roasty from the malts; followed with mellow vanilla, coconut, and lightly spiced premium rum.

Mouthfeel: medium bodied beer with low end of moderate carbonation levels. Not a hint of booze; a very mellow barrel aged beer. It is really easy to drink this beer because it is so balanced and not at all boozey. I would be interested to hear what the ABV is on this beer; I would guess it is around 8% based on how it drinks. This beer has a lot of rich and complex flavors without being too sweet because the spicy rum evens it all out.

Overall: I confess that I am a Tyranena BGW series "homer". Island Booty provides more evidence to support my "homerism" opinion! I normally would not be that interested in an imperial brown ale aged in rum barrels, but since this is Wrath of Rocky aged in a different barrel (rum barrels instead of bourbon barrels) and it is a BGW series beer. So, I figured it was probably worth the time and effort to have this beer. Seriously though, where else in the USA are you going to find high quality of a barrel aged beer for 11 dollars for a 4 pack?

Island Booty from Tyranena Brewing Company
Beer rating: 87 out of 100 with 31 ratings