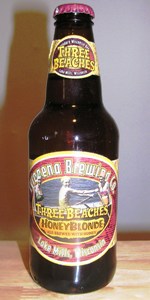 Reviewed by Jtall78 from Illinois

Poured clear and flat. I don't mean a little head, I mean flat. Muscled through it. Aroma had a honey note. Taste was very bland, with a fading honey note in the middle. Tasted flat, and nearly stale. I really hope I just got a dud. I'd try it again, but I would not buy it.

Reviewed by ahentz from Illinois

This blonde is smooth and lightly sweet due to the honey. It offers flavor depth that most lagers only dream to achieve. It goes down easy and makes you reminiscent of warm summer nights.

Reviewed by OrestesMethuon from Montana

Immediately, this beer reminded me strongly of Midas Touch. Not because it was anywhere near as good, but because Tyranena definitely goes heavy on the honey with this light-malt, low-hop ale. The comparison, while not favoring Three Beaches, does serve to point out the narrow space high-honey beers (like this and Midas Touch) have to tread to be great: it's easy for the brew to become cloying, too wine-like (in the wrong way), or otherwise dominated by the mead-esque tastes and textures.

Dogfish Head toes this line and avoids these pitfalls in Midas Touch with elegant use of muscat grapes—sending the beer along two divergent wine-like vectors, one white and one gold, and adding substantial complexity to the beverage—along with yeast that provides a crisp sharpness and almost champagne-like buoyancy.

The precise problem with Three Beaches—and if it seems like I'm writing more about Midas Touch than the beer in question, this is the reason—is that it lacks any such layering: outside the honey, there's not much there, and the specific honeyed flavors insist themselves so strongly that the light and refreshing qualities—the putative blondeness—that one would expect are actually undermined.

One serving wasn't bad; I cannot, however, really imagine drinking two or three, much less sessioning on a six-pack while relaxing all day on some lacustrine beach. Judging by the name, that seems to be the telos of this honey blonde, but—while by no means a *bad* beer—I don't think it accomplishes its end.