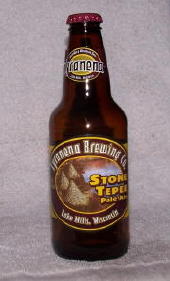 Same in the taste, does everything you think of in a pale ale. Grapefruit bitterness not too high, not too low. Its not 'balanced' per se but it would be compared to some of the lush hop ones presently.

The beer is clear and light golden with a thick, white head. Aromas of muted floral hops, biscuit, malt, a hint of citrus. Bready malts with a touch of earth and subtle floral and hop notes. Thin body with light bitterness. Middle of the road pale ale.

A - Very nice looking clear light golden orange with a 1.5 finger bright white head. Fades quickly and leaves a collar with some lacing.

S - Dull floral and pine hops. Hints of bread and biscuit malt. Not much going on.

T - A bit more flavor comes through with the hops. Some floral, citrus, and light pine. Over tones of bread and honey sweet malts. Finish is a light bitter citrus.

M - Light bodied and somewhat watery. Carbonation is decent for an APA.

O - Standard offering for an APA; much better offerings in WI.

A bit more pale than some of the newer pale ales out there that tend to be darker. This is a hazy peach color, just opaque enough that you can see silhouettes through the bottle, but little else. The head is a finger thick, bright white, and retains pretty well. The head is fluffy and inconsistent, with peaks like an IPA. A nice lace is left behind.

I'd like a bit more flowery and fruity scents from an APA. The citrus is present, but very subdued, with malts filling the olfactories.

Fortunately, the flowers and fruit simply explode in the mouth. Very floral with a good balance of citrus.

It's complex, yet still simple. There's a burst of sweetness, followed by a splash of citrusy acid before finishing with a gentle but lingering bitterness. The finish is both crisp and sloppy wet. Light-medium to medium-bodied and relatively low in ABV.

Another stellar beer from Tyranena, still haven't had a bad one. This is an easy beer to drink because all the flavors and feelings work well together. The ABV isn't too high, and while it's not exactly a sessionable beer, it's one you can take to a picnic and knock back quite a few.

I don't like the numerous accepted spellings for the titular conical dwelling. Just sayin'. This stuff pours a clear brass topped by a finger of lightly off-white foam. The nose comprises biscuit, mild mixed greens, and a twinge of flowers. The taste brings in more of the same, with more greens and sweeter flowers. The body is a light medium, with a light moderate carbonation and a sorta/kinda wet feel. Overall, a middling pale ale at best, one that lacks any real character worth noting.

12 oz. bottle, acquired as part of Tyranena's The Legendary Collection assorted twelve pack. No bottled on date, although the twelve pack says Packaged 04/02/2013.

A - One finger of bone white froth for a head, on top of a nice clear amber orange body. Lots of bubbles rushing to the surface, and lots of sediment floating down. Some nice scattered lacing.

S - Smell is of bready malt profile, and a subdued citrus hop smell. Citrus reminds me of a hybrid pineapple & grapefruit smell. Fairly underwhelming smell, though.

M - Feel is slightly bitter & with some fruit sugars hanging out. Goes down mostly clean though.

Overall, a harmless inoffensive beer. Tame compared to some other American pale ales of today which are mostly hop bombs. A refreshing, highly drinkable beer though, even though it doesn't really break any new ground. With a modest 5.75% abv, this is definitely a beer I would try again. Tyranena is quickly becoming one of my favorite breweries, and I love the little history blurbs on the bottles.

S-Malt, some grass, tad but of citrus, hops do not balance with the malt.

T-Malt forward. Very malty, Some hops, tad but og citrus. Not much bitterness.

O-Wayy to malty for an APA. Needs a lot less malt and more hops.

Pours out a lightly-hazed golden color with another flash head that falls back to the collared ring of fizz, minimal lacing. Smells of floral and light orange peel, tastes of cracker malt, lemon / orange peel, and unfortunately lacks much of the floral / perfume nuance from the nose. Spritzey carbonation on a lighter body.

A- Pours a clear dark golden. Very thick white head lasts well and leaves some notes of lacing. Lots of carbonation bubbles rising up.
S- Aroma is floral, a bit fruity, with a graham cracker like sweetness.
T- There's pretty good depth of flavor here. It has a fairly assertive fruityness to it. There's this flavor that really reminds me of asian pear. I know that's a random idea but it's fairly similar to me. Sweet pale maltyness in the finish.
M- A bit more body would be nice. It's just a notch or two below where I'd like. Carbonation is just as equally high. A little to assertive on the tongue.
O- I'd drink this again. Good flavors and no glaring flaws. Worth a try.

Light orange and copper pour, a little bit hazy, this is a 100% certainty that it isn't filtered. Standard aroma, a little bit of hops, malt, breadiness.

Good floral hop balance, ample bitterness, but nothing over 60ibu I'd say, just right. Along the lines of the classic American pale. Hoppy, refreshing, even a little sticky resiny. Not watered down or thin, yet plenty refreshing and sessionable. Balanced, slightly leaning hoppy, which is how most of us like it. Hops lean grapefruit.

O- not very good one and done on a style i enjoy..its not a drain pour..its just average

Not Tyranena's best. It pours pretty yellow, slightly yellow. Not much head. Malty taste, light on hops. Definitely some fruit characteristics. Not that citrusy, but a little. Almost a little corn flavor. Not my fav from this brewery. The IPA is amazing.

Aroma is sweet grainy malt. Some caramel and tropical fruit. Earthy hop bitterness and a bit of a mineral quality.

Taste is muted grainy malt. With a very slight earthy bitterness in the finish. Flavor seems disjointed and rather off. Finishes with an odd oxidized musty quality.

Mouthfeel is light bodied. A little too thin and watery to hold real flavor.

The flavor is really confused, thin, and uninspiring. Perhaps this is an off beer? However, I'm not ready to drink another one and put it to the test.

Poured a hazy yellow with a thin layer of white head.

The smell is odd, not hoppy, almost soapy with a bit of astringency.

The flavor is a bit on the bland side with a light toasted malty base which isn't to bad, but the hops are on the flat side with just long light piney bitterness and no real depth to them. Also a touch of copper, maybe a bit of oxidization, I can't find a discernible bottle date to tell if its old or not.

The mouthfeel is light and a bit chalky.

Overall a pretty poor beer, I'm hoping maybe its just old, but I have a hard time thinking a fresh version would taste great either.

Clear gold, with lots of sediment, oddly. Solid foamy head, and no lace.

Nose is subtle. A little citrus hops, and a little yeasty.

Taste is bright citrus hops -- tangy and almost sour. And despite the lackluster appearance, this one's a delightful pale ale, balanced with the sweet malts and astringent hops. Rich, full-bodied, and full-on session-worthy.

Tried this one at the Tyranena tasting room over the weekend.

Poured a nice hazy orange/copper color with some thick white head on it and good lacing on the glass. Smell is nice and hoppy with some citrus notes and light caramel malt coming through. Taste is very good - very balanced beer with some citrus notes to add to the great hop flavor. Light-medium feel, went down very smooth. I really enjoyed this beer overall. It's not over-the-top, but it's a good quality pale ale. I wouldn't mind getting a case of this to have on hand.

Pours a slightly hazed gold in the glass, topped with 1 ½ fingers of foamy bright-white head. This retains with a thin creamy layer of froth that skims the surface, staying rich, and leaving back a heavy cascade of lacing. The aroma smells grassy and citric, maybe even a touch peppery, which is balanced out in the back of the nose by sweet notes of toasted biscuits.

That grassy feel carries over to the taste, along with a moderately bitter citrus rind character. Some fruitier citrus flavors emerge as well, which works with that flat toasted graininess of the malts. That pithy citrus peel really lingers strong in the finish with a moderate amount of dryness. The mouthfeel is medium bodied, with a crisp feel on top of a much more creamy and easy carbonation underneath. Just a touch of light warmth is present in the body.

This was a decent Pale with an easygoing feel and approachable well balanced flavors. I'm going to have to grab a pint of this next time I'm at the brewery, as I'll bet this pops a bit more on draft.

D: Delicious! I could drink this all day. Tyranena continues to make great beer. Everything I try from them goes from good to amazing. Give this small WI brewery a try, you will thank me. I think I found another Pale Ale that will fill my BBQs and fishing trips this Summer.

Pours a slightly fuzzy, copper color with a full, white head. Head falls to a small one. Decent lace.

Medium bodied in the mouth with a rather sharpness to it.

S - Light scents all around. Just a hint of some malts, american hops, and even a bit of yeast breadiness.

T - Starts off very light, malty and sweet. Some caramel and toffee, even nutty notes are present. Mid-stream some citrus hops make an appearance, fairly assertive. Balanced. Finishes with a fairly decent bitterness and some grain like husky flavors.

D - Easy drinking, decent drinkability. Flavors are well balanced, not overwhelming. ABV is very manageable. Lightly filling as I go through the glass.

Pours a dark, honey-golden color with a hop forward aroma of light citrus, fruit, and flowers. The flavor is light hops with a bitter finish. This is more bitter than I would expect from the aroma. Strangely, it is in fact more bitter than the Bitter Woman IPA.

Amber straw colored with peach highlights when backlit and a creamy dollop of eggshell foam that leaves plenty of fine lace on the glass. Citrus fruit and toasted grain make up the mild aroma. Apricot and citrus rind flavors with some graininess. Finishes dry. On the leaner side of medium bodied with aggressive carbonation. A nice old school APA that is probably a bit under-hopped for most BA's.

Poured from the bottle a slightly hazy orange color with a thin white cap.

The taste was a nice mix of grapefruit and lemon along with a light maltiness. Finishes clean.

A quite enjoyable pale from Tyranena.