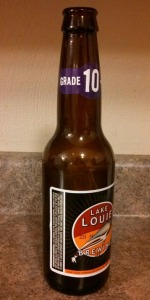 A - Cloudy rusty orange with a 1 finger white head. Nice webbed lacing on the glass.

S - Scent is soft and bready with some sweetness. Hops are light, grassy, with notes of citrus and faint bitterness.

T - Starts off sweet and bready, but moves into a bitter finish. I find that there is mostly a flavor of bitter grapefruit, but I also noticed some hints of onion.

O - Solid IPA that reminds me of Kiss the Lips with an increase of hops. Kiss the Lips is more mild and sweet and this has more bitterness on the finish.

12oz bottle, no bottling date but I expect this one to be fairly recent. Poured into an unlabeled snifter 8/30/2014.

S- Bread, citrus, marmalade, caramel, a bit of grass. Nothing too complicated, neither weak nor strong in terms of its strength. [3.25]

F- Slight grapefruit, grass up front with a fairly medium-grade breadiness, some caramel sweetness and a fairly heavy mineral flavour mixed in with the grassiness on the backend. The mineral flavour is presumably from the yeast. Bitter grassiness at the end. [3.5]

M- Medium in body although on the slightly thinner end of the medium spectrum. Good carbonation, with a very nice dry finish. Solidly drinkable IPA, especially in the hot Wisconsin summer. Surprisingly bitter on the backend, which is nice. [3.75]

O- Not a bad IPA from a local brewery I have a tendency to overlook. I probably won't buy this again in a sixer just because I'd rather buy fresh Two-Hearted but you know what, stylistically this isn't bad at all. [3.5]