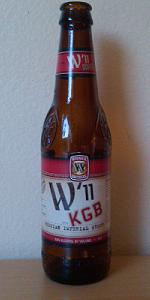 The taste was like the aroma, except the alcohol was prominent. Big bitter, big roast, big boozy. Affordable in this format 12/6. Hoppy and burnt makes for a bitter experience, dropping those dark fruit times all over you.

A decent beer, especially in limited amounts, gets tiresome those after too much.

Poured from a 12 oz. bottle to a snifter glass.

(Appearance) Pours a light brown/tan head over a very dark brown body. near black. Retention is below average and lacing is light and stringy. 3.75

(Taste) Moderate chocolate malts with notes of earthy, heavily roasted barley with subtle notes of coffee bean. A bit heavier on the delivery than the aroma suggests, but still not exceedingly impressive. 3.25

(Mouthfeel) Texture is silky, lightly chewy, slick, medium dry. Carbonation is mild, generating a light frothiness and a modestly crisp finish. Body is shy of medium for the style, medium/heavy overall. Balance is slightly earthy and roasty bitter over sweet. Alcohol presence is mild and there are no off characters. 3.5

(Overall) As far as beers go, this beer clocks in as an above average, fairly drinkable stout. Against other Russian Imperial Stouts, the flavor profile is mundane and shallow without much development, stunted and simple. As I recall a 4 pack of this beer sold at a considerably high price, I wouldn't recommend this as an ideal Imperial Stout option, but potentially a decent stepping stone from Guinness to something much, much finer. 3.25

Taste: Opens with charred malt and bitter cocoa, followed by spicy alcohol. The charred malt lingers throughout, defining the backbone of the taste. The taste is a bit one-dimensional, being defined by charred malt and alcohol. Finishes with a lingering note of charcoal. The ABV of 9.3 % is very well-concealed.

Drinkability/notes: Sort of a Russian Imperial Stout-light, but cheap at the price, it was $6.99 a six-pack when released, how can one complain?

Bottle date Dec 10 2012, stored in my cellar. I have been spoiled by Founders RIS and while this RIS is not bad, it falls well short of the Founders. Would like to try a fresher release on draft, but not likely to purchase a bottle again.

Black and opaque in the glass, with a semi-durable head. Limited lacing.

Flavor: rich and fairly complex, with a hint of whisky that comes with the obviously high, but not harsh, ABV. Lingering flavor of very dark roasted grains.