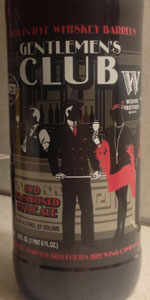 2014, properly cellared bottle. Pours a medium orange amber with a half finger, dark khaki head with great retention and thick lacing. Aroma of mildly biscuit malt, cherry, light citrus and whiskey; lightly oxidized. Flavor is caramel malt, woody vanilla, whiskey, cherry and light rye tartness. A bit of woody astringency throughout. Medium bodied with light creaminess. The last of these variants that were lost in the cellar. I would not have aged this so long if not for completely losing track a dozen or so bottles in my basement. Like the other variants, it is not as robust as other barrel aged big ales, but again is better than I expected. It held up fine for an extended cellaring. The basic flavors are fine and have light, expected oxidation and mellowing notes. This version has a bit of astringency that tastes like aged hops, but is likely from the barrel. The rye component is light, but the whiskey is clearly present. Not an exceptional barreled ale, but enjoyable and quite satisfactory after all these years. Interestingly, more than the others, this has developed some light caramel notes like a barleywine.

What a waste of a barrel. Overly ripe fruit meets cheap booze and cough drops. Syrupy complexion with sticky, lingering risiduals between sips. I have to wonder if the BA's leaving positive reviews (or not so negative) have ever had a barrel-aged brew before. Avoid this one.

Pour is a murky light copper color with a tan head that dissipates quickly. Nose is heavy caramel malt, a bit of metallic phenol, moderate wood, boozier whiskey, some banana esters and a little sweeter. Flavor is similar, extremely sweet and messy malts of caramel and a touch of metal. Notes of toffee, banana, green apple skin. Really sweet, the barrel is underlying and not really adding. Full bodied, fairly chewy, soft carb.

A: The beer is hazy caramel amber in color. It poured with a quarter finger high beige head that died down, leaving delicate wisps of lacing on the surface and a thin collar of bubbles around the edge of the glass.
S: Moderate aromas of caramel, oak, and toffee are present in the nose. Bits of whiskey also become apparent once the beer warms up.
T: The taste is similar to the smell, but isn't nearly as malty as I would expect as the notes of oak are stronger and there are additional notes of whiskey from the barrel aging towards the finish. Slight hints of cherries are perceptible. Except for the whiskey flavors, not much other alcohol flavors are noticeable.
M: It feels nearly full-bodied on the palate and has a moderate amount of carbonation along with some warming characteristics from the alcohol.
O: This makes for a nice beer to sip on a cold winter night as the whiskey lends some warming to the mouthfeel.

Spending time in California has its benefits, mostly on the beer side. This bottle, & its friends, were marked down to $8.99. Who am I to turn that down? 22 oz. bottle split with my lovely wife.

I don’t know why, but I expected this to be dark, & it ain’t. Perhaps I should do more research, or kill fewer brain cells. The pour is a dull, ruddy red. Nose is light whiskey, fruits, & a dash of sweetness.

Not what I expected, but from two fine breweries, not the wall-banging triple I’d expected. I’ll be interested to see what the other two bring. Good beer.

Not a great deal of foam on this but adequate carbonation on the tongue. Handsome dark amber color could be a tumbler of rye whiskey. Boozy but resiny aroma.

This stuff is sweet, hot, and fruity. Just like the ladies they conjure up on the label. Pleasant caramel with an orange flavor. I can even taste the Maraschino cherry. Powerful taste and strength. You can feel the alcohol fumes. There is a tanginess to offset the sugars, and a deep dark malt with a bitter burn for the finish.

From the 22 oz bottle purchased at Liticker's Liquor in Ocean Beach, where all these are marked down to nine bucks from the previous astronomical price. Something of a novelty but a small jolt makes a great nightcap.

A: Almost a finger and a half of head. Medium red-amber. Solid yellow in the dimple. Some slight sediment floating around.

S: Rye, lemon, orange, and cherry are all apparent, though rye and orange are more predominant. Toffee and oaky molasses. Rye is not as strong as the previous rye aged beer I had.

T/MF: Rye-based caramels are more apparent on the palate. A little cherry. Maybe the slightest touch of orange. Rye definitely takes over here! Very slight eucalyptus(?) hiding in the background.

Poured from a 22 oz. bottle, into a Belgian tulip glass.

Edit: Unless I miss my mark, there is fat (or other solidified oils) in this beer! Considering there is no reason (meat) for that, that's kind of gross!

I had this one at the 15th ave Hop House in Portland, OR. It was served in a snifter, the beer is a robust ruby color with a skin of beige foam. It has a surprisingly awesome lacing.

Nose of whiskey, spice from the rye and some malt.

Wow, the whiskey barrels did their trick, nice rye IPA with a strong whiskey base. Malts and some citrus but the there is a bit of booze that is always in play. I like how this one hangs together.

The mouth is decent and a bit coating. Great way to finish a night.

Seems Cigar City is collaborating with everyone these days.

Pours a pretty amber with a short, light brown head.

Aroma is strongly alcoholic, with notes of cherries and whiskey. This smells like a mixed drink, which is the point.

The taste is all about the whiskey. It's quite powerful, with hints of malt and fruit sweetness. It's no surprise that this is 10 percent alcohol.

Overall a beer for fans of barrel aging and whiskey. If you don't like those flavors, you won't like this beer.

At the source in Tampa. Draft in CCB snifter. Pours a reddish amber with big thick cream colored head. Aroma of hard candy, oak, toffee, some fruit. Flavor is sweet bubblegum, bits of fruit, and some big oak flavor. Bit of whiskey but not much rye from it. Sticky and slick mouthfeel with low carbonation. Only ok and a little bland.

On tap at the bier stein the other day.

The beer pours a fairly dark, copper amber color with faily good head retention and light lacing. The nose is very sweet and malty, and was dominated by an aroma of cherry cough drops and vanilla. There was at most a hint of whiskey in the aroma profile I thought. The flavor profile is just more of the same in this sweet beer, and I confess I found it a bit heavy and cloying on the palate. Mouthfeel is fairly fully, with a long, malty, slightly hot and boozy finish.

Tried this side by side with the other two Gentlemen's club beers the bier stein had on offer, and found very little diference between any of them. All of them were dominated by a considerable amount of sweet malt and vanilla. This version seemed to have a touch more whiskey on the nose and palate, but the difference was pretty subtle.

On tap at Top Hops beer shop in NYC. Reviewed straight onto the site via mobile. Apologies in advance for typos.

Pours a vibrant but slightly murky red colour, a bit cloudy. Head is big, creamy and dense with gorgeous sticky lace. Looks big and bold, but neither too big nor too bold. Just right.

Smells sweet and spicy, with an odd tangy character as well. Cinnamon, orange peel blend with the rye whiskey and oak which is quite strong. Bit boozey, but pleasant.

Taste is hot and boozey from the get-go. Big whiskey flavour with vanillin oak and some rum toffee. Lots of malt underneath helps to pad it but the dominant flavour is unmistakably oak and whiskey. Sweet, warming and big. Yeah it's a big 'in. But not a bad 'un.

Mouthfeel is a little hot and boozey, but fluid and fairly smooth.

For all its flaws, it doesn't turn be off nearly as much as it might have. Big flavour, a little lopsided but smooth enough overall.

This is a collaboration with Cigar City.

"Drawing inspiration from an Old Fashioned cocktail recipe and the Gentlemen’s Clubs where the cocktail was first served over 100 years ago, this collaboration beer brings together two breweries from opposite ends of the country and ingredients from the home states of both breweries. Using an Old Ale recipe as the base beer, Gentlemen’s Club was brewed with cherries and oranges, Alchemy, Sorachi Ace and Pacifica hops, and hand-selected specialty malts to mirror the qualities typically found in an Old Fashioned cocktail. The beer was aged on three different woods: bourbon barrels, rye whiskey barrels and new oak spirals, resulting in three unique versions of the beer, each offering a slightly different take on the same age-old recipe."

a - Pours a hazy reddish-brown color with two inches of off white head and moderate carbonation. Tons of lacong on the glass; looks a little better than the bourbon and new oak versions.

s - Smells of tropical fruits, caramel malts, whiskey, oak, toffee, toasted malts, some sweet sugar, and molasses. Lots of fruits in the nose, and caramel. The whiskey is there but like the bourbon version, not overpowering at all. Nose seems a bit fruitier than the bourbon; like the bourbon slightly better but they are close.

t - Tastes of whiskey, oranges, cherries, sweet dark fruits, caramel malts, toffee, bourbon, oak, tropical fruits, toasted malts, bread, some burnt malts, and sugar. Where the taste had more fruit in the nose than the bourbon version, the rye version has more whiskey and less fruit, making it better in my book. Still not dominant, but more up front now.

m - Medium body and low carbonation. Body is very smooth and creamy, and easy to drink. Mouthfeel is creamier and better than the bourbon version, similar to new oak version.

o - Overall I liked this one more than the bourbon version as it had more whiskey in the taste and less fruit, and a better mouthfeel. I still like New Oak the best, but this one is quite good too. Worth checking out.