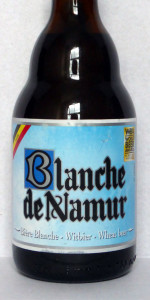 Some unique qualities here. This beer is hazier than most Belgian wits. Somewhat more orange than bright gold. In the nose and flavor, it's very floral. All I could think of on first sips were flowers--really lively taste. Coriander comes through for sure, and orange peel factors in significantly. It's delicious, and let it warm a bit, as the flavors become even more intense.

Has a cloudy pale orange appearance.
Medium light carbonation with about a medium body.
Aroma is clove,wheat flower,bread,cereal, malt and very light citrus.
Taste doesn't stray far from the aroma,light and satisfying..
Overall it was a very well done beer that I would try again

500 ml can poured into a Duvel tulip glass. Canned on 4/15/21, so three months old which is pretty good for an import.

L---Cloudy bright yellow color. Fluffy white head had good retention and left good lacing. Some sediment came out at the end of the pour. Not that there's anything wrong with that.

16oz can. Poured out a cloudy, straw-yellow color with a small, off-white head of foam. It left sudsy trails of lace on the glass. It smelled of yeast, spices, cracked wheat and fruitiness. Sweet wheat, fruit, caramel and some spicy/yeasty flavors. Crisp and sharp.

500 ml can split with a friend. Pours a cloudy light yellow with an odd greenish hue. Aroma and flavor have a lemony overtone along with wheat and coriander/spice. Overall it's fairly unusual and not my favorite witbier.

Poured from the tall can into my Blanche de Chambly glass. Faint haze on the pale yellow brew. Delicate banana-scented brew. Watery in a refreshing way but with sudsy mouthfeel. Long nose of clove. Just a faint spicy bitterness in the aftertaste. Quite spicy, like banana bread. A pleasant highly drinkable brew in a traditional Belgian style.

The pour is a bright yellow that looks similar to lemonade. I see lots of floaty sediment in the shaker pint glass. I'm getting a mild & light citrus on the nose & on the taste i'm getting the same. This is one of those Belgian Witbiers that seems to more on the milder side of things. The citrus note taste more like lemon than your usual orange Witbier note but it's a mild & slightly sour type of lemon. In addition to, their is hardly any of coriander note which is not a bad thing if your looking for a Belgian Witbier that you want to sling back to back on a warm summer afternoon. I recommend this beer with some broiled salmon, a fresh garden salad & some light yellow colored rice. There is a best by date on the bottom of the can. All in all, I think it's a decent beer for the style, but I prefer my wheat beers with some bolder notes & flavors anyways, cheers! B

Misty gold colour with a modest white head that dissipates quickly. Aroma and flavour have typical fruit and spice notes although the flavour has slightly moreacidity than usual making it more refreshing and less cloying.

Can from Market of Choice.

A hazy yellow with a dense, white head with good retention and lacing. The nose is bright and fruity with a wonderful orange peel brightness, a nice, bright and fragrant coriander seed note, and a doughy, bready note. A nice yeast note is present as well. The palate opens bright and vibrant with citrus and coriander and a nice raw, grainy wheat note. While the flavor is excellent, the mouthfeel is just too thin, too watery. The high carbonation pairs well with the grainy acidity too. Drinkable, enjoyable, but not the best expression of the style.

16oz can poured into 14oz teku. Poured a very pale yellow with 3/4 inch of white head that had good retention and lacing.

The aroma had a light wheat base supporting the expected yeast and spice scents.

Very similar on the tongue, just expanded to a larger degree.

The body may have been a bit fuller than is usual for the style, was nicely smooth, had good carbonation, and a semi-dry finish.

Drinkability was very good, enough flavor to keep your interest, but not so much going on that the palate gets overwhelmed.

Overall, a very nice brew. Perfect for warm weather outdoor drinking. A must try if you like the style, and a great introduction to the style for those unfamiliar with it.

a beer i have seen around quite a bit over the years, but somehow never dipped into until now, i found a bottle for an unbelievable price, and it felt right to open it up on christmas. this is like a better version of a hoegaarden, delicate like that, with a very similar yeast profile, but quite a bit more complexity to it, really an incredible beer, especially for something like seven bucks for a cork and cage large format. its hazy but uniform on the pour, high headed, wispy and white, but a little matte in color, fizzy as can be as i go to smell it. done with orange and coriander, as is traditional, but the label also says brewed with licorice, which must mean the root not the candy, and maybe its a little tricky to pick this element out in nose and taste, but suffice it to say it is certainly part of what makes this so interesting. i love the light banana and cooking wine profile up front, and the earthy peppery spice on the back end, with soft citrus and fresh cracked wheat to it. its effervescent, delicate, like drinking a cloud, but its also full flavored and very distinct, one of a kind, really is like a jazzed up hoegaarden, that light and similar on the ferment, but a lot more going on. i could drink a dozen of these, even the big bottles, this is a quintessential example of the style in my opinion, and shockingly underrated here. if its been awhile since youve had one of these, give it another try, i think it stands out more in the context of all the samey and inferior american made takes on a wit. world class all the way.

edit: so awesome this is being canned now! it remains one of the best examples of the style in the game, and its cool to have it in this most accessible format. good call!