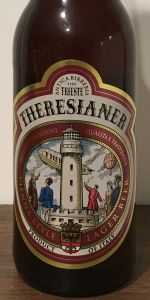 Notes:
View: Beers
Reviews: 22 | Ratings: 36 | Log in to view all ratings and sort
Reviews by FBarber:

Pours a clear amber color. Thin off-white head dissipates steadily but not completely leaving a thin ring of foam along the outside of the beer.

Taste has notes of bready malts, caramel, earthy nutty notes with a slight spicy herbal hop finish. Slightly sweet but not overly so and balanced with the presence of the hops.

This beer is a crystal clear copper color. It has a nearly non-existent head, except for immediately after the pour. The smell is of bready malt (bread crust) and a very slight caramel scent. The taste is semi-dry, with a notable, but somewhat somewhat mild, very lightly toasted malt character. A little melanoidin action here. No real hop flavor (or scent) of hops. Moderately light body and a crisp mouthfeel. This is a pretty clean beer, with the profile of a moderately malty, very clean lager. Not bad.

Red copper color, Vienna style. Not too muche head, beige in color.
AT the smell, malt, caramel and biscuit, intense.
The taste starts light, with malt, then grows, and it left a long biscuity malt, with lightnote of toasted malt in the end.
Easy and drinkable.
Biscuity in the aftertaste, with note of toasted.
Full, pleasant.

Pours a light mahogany color with a voluminous eggshell head. Sheets of lace adorn the glass all the way down. The smell is sweet with caramel malt, mild noble hop notes and a wet grain element. The taste is very sweet. Wet cardboard notes blight the already weak malt profile. Hops are very low in both aroma and bitterness. The mouthfeel is quite full-bodied and briskly carbonated. The finish is sweetish and grainy.

A mediocre Vienna lager, far too sweet and lacking in both malt and hop girth.

Brown in color with decent clarity. A fingernail of off white surrounds the rim and covers a third of the top. Moderate aroma of dark malt and caramel. The flavor is pretty one note with lots of dark malt. There's a bit of caramel in the mix. The mouth is a bit thin and moderately carbonated.

What we now call Vienna Lagers were in fact the original Amber Lagers. Vienna malt is kilned at high temperatures so it gains a lot of colour and is hence characterized by its golden-orange colour, the very same that Theresianer Vienna unsurprisingly possesses. Deep but clear, you'd indeed be hard-pressed to find a more exemplary looking amber lager.

The bouquet makes a strong case for itself too, though it's not nearly as flawless. Part of the reason is this bottle's age; now approaching its 'best before' date, secondary aromas of dried fruits (figs, raisins, prunes) are starting to interfere with the rich, toasty, lightly nutty maltiness I noted in fresher examples. It smells more Bock-like than Vienna now.

But the flavour still showcases that contrast between rich but elegant maltiness, the curious combination of flavour and cleanness. Toasted dark bread crusts, roasted nuts, toffee squares, and now even candy apples make minor appearances on the palate yet all dry right out on the finish, leaving the palate mostly erased of their tastes but with enough leftover to say 'yum'.

Hops might be helping too, albeit in the background. They're not noticed outright. Notwithstanding, there is a little bit too much caramel and honeyed-nut dimension for the style if you ask me, even if it doesn't linger. I definitely could have done with a little more toastiness.

From the couple offerings of theirs I've tried so far, I'd say Theresianer is a serviceable brewery. Both Lager and Vienna were only about as exciting as than their names led on but both were very approachable, reasonably pleasing examples of their respected styles. The Italians might not be on-par with the Germans yet but brews like this show they're intent on closing the gap.

the Vienna style has vanished in Europe (Theresianer claims to be the only brewer of this style in Europe, not sure whether that remains uncontested) and after trying this brew it is a real loss ...

this is a beautifully bronce coloured brew combining the freshness of a good lager and the body of an english bitter ... the taste is rather malty with little fruit, the mouthfeel is slightly tainted with some less pleasant bitter-sweet notes ...

Pours a very light amber. A good sized head that recedes quickly and leaves no tracing on the glass. Faint floral whiffs that are almost creamy - this beer would go great with a soft cheese. It tastes quite sweet at first, with a nice maltiness coming through, ending with a a faint bitter hoppiness. Really the sweetness carries the flavor throughout. That's it's strong point, and it's weakness - it's too sweet to session, but not flavorful enough to sip.

Pours a clear, copper color. 2/3 inch head of an off-white color. Great retention and good lacing. Smells of pale malt, sweet malt, caramel malt, hint of hops, and a hint of sugar. Fits the style of a Vienna Lager. Mouth feel is sharp and crisp, with an average carbonation level. Tastes of caramel malt, pale malt, sweet malt, hint of hop, and slight sugar. Overall, decent appearance, but the body and aroma is hurt by the sugar sweetness.

This is a dark copper-colored beer. A creamy foam of head subsides from the pour at one finger and fades with moderate speed, leaving some thin spotting as it goes.
On the nose are nice toasty and caramel notes with a hint of nut and some fruits. It's fairly firm.
The fruits take hold along with a peculiar graininess in the flavor. It's a little leafy and metallic, with lots of raw nut and toast coming out into the finish. The weird fruit/metal combo lingers, though.
The body is light and clean, but a metallic thinness is present from beginning to end of every sip. Crispness is steady, and it's decently smooth.

This pours a bright honey golden with a dense white head.

Some sweet malts on the nose but definite whiff of cooked vegetables which is a little off putting. It sorts of melds with the malts but its never been a characteristic that I can forgive.

The same characteristics carry across to the palate but not as strongly. Still not giving the malt profile that this could.

This bottle is within the best before date but only just. Would like to try it fresh.

A: Pours an absolutely clear copper color forming a medium creamy and thin bubbled beige head. Medium retention and quite a lot of spotty, lingering and a bit soapy lacings formed and left around the glass

S: Sweet caramel and crystal malts in the nose. Very earthy. I like it. Flowery hops in the end

Poured into a Gulden Draak flute. Pours a medium orange amber. Thin fine off-white head dissipates to a thin film and ring around the glass, no lacing. Aroma of bready and caramel malts and light grain. Flavor of sweet biscuit malt with a hint of light fruit. Finish of mild malt, light hops and a light floral element. Light mouth feel. Refreshing and pleasant.

Bottle acquired in Abbott's Alehouse off-license in Cork, Ireland, and served in a Grolsch pint glass. Reviewed from notes.

Sm: Nutty hops are nicely subtle, but the malt and barley slightly overpower that.

T: Notes from the nose. The nutty hops trickle in towards the climax. Not quite balanced. Built poorly for the style. There's not a great deal to say about a beer this relatively simplistic.

Mf: Smooth and wet. Doesn't quite match the flavour.

Dr: This is what happens when an Italian beer company attempts a Vienna lager. At least the Yanks produced Sam Adams. This is cheap and crap - perfect for Irish drinking, but not for serious beer fanatics.

Big thanks go out to a good friend of mine that brought this and a couple other beers back from a recent trip to Italy. I opened this bottle on an evening when I was searching the fridge for random good brews. Hard to say it, but... I didn't find one inside this bottle.

Theresianer Vienna Lager hits the style right, but weakly. It's the same style as Blue Point Toasted Lager, and the two are vastly different for this New Yorker.

A harsh pour gives me some head in the pint glass, but that quickly goes away leaving just a touch of carbonation, the reddish hue and a little lace. It's inviting enough to look at, and the smell isn't too bad either. There's a subtle grassy hop presence, but mostly present is the malt and water. It's easy drinking beer for sure, and might be nice in a Roman summer. But here in Brooklyn, it was a bit tepid. And although it was only 5.3% alcohol by volume, the alcohol was present at the back. Maybe it's that tannin stuff people talk about (I'm uneducated here), but it just wasn't pleasant.

The mouthfeel is a bit weak on this beer, it's very light, and although appropriate for the style, leaves much to be desired. And while it's easy-drinking, I only finished it because I was eating food alongside it. I know Italy has tons of beer offerings, and this is probably a run-of-the-mill one there, so it was a bit sad that it didn't live up to my expectations. But I don't blame the country, and I won't show this review to my friend!

The Theresianer Vienna Lager is a decent beer. I actually had this whilst in Sao Paulo Brazil. The beer pours a rich amber with decnt white head that hold failrly well. The smell is simple grain and malt. The first taste of this beer was very grainy. The tastes following the malt started to come through with a bit of sweetness. The mouthfeel is good, very light bodied lager with decent flavor that paired well with my Brazilian dish.

Picked this up in Vienna, Drank it on the train on the way to Graz...

Had most of it in the bottle, poured out a little into a plastic cup just to see it's color.. hazelnut brown, light head, clear body, looks like a lager to me!

hazelnuts and toasted malts in the nose.

tasted amazing. crisp nutty malts, smooth mouthfeel with a subtly sweet aftertaste... i'm trying to warm up to lagers, and I could drink this everyday. I wish I picked up a couple more bottles, but I'm glad I got to try it.

Offwhite big head with medium coarsed bubbles, lacing. Crystal clear amber body with lots of medium bubbled CO2.
Unexpected rich malty aroma of toasted notes, bread, roasted hazelnut, dried fruits (like apples but without the original apple aroma
Malt is dominant, bread, nuts, ended by a spicy hop note but restrained, just to balance the malts.
Medium body, refreshing carbonation
A very nice clean take on a Vienna Lager from a city the used to be part of the Austrian Empire. The malt profile is nice and the the hops are in the the background for balance. Congratullations!