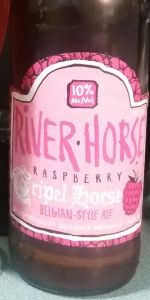 T: raspberry is predominant from start to finish; relatively natural raspberry character; from the middle on, some spiciness creeps in; clove comes in shortly thereafter; mild bitterness at the end;

Orangey amber colored beer with a rapidly fading head. Taste is raspberry,spices and alcoholic warmth. Overall a decent beer that you still feel when you are finished.

Notes via stream of consciousness: How odd that the bottle reads "BOTTLED + BREWED BY RIVER HORSE BREWING CO." rather than "brewed and bottled by", but whatever. In the past it used to be an exceptional thing if a brewery actually bottled their own beer, but I guess that doesn't mean anything anymore. The body is a hazy ruby-tinted amber and hundred of tiny bubbles can be seen streaming upwards to take their place beneath the creamy, slightly pinkish off-white head. The aroma offers a little bit of fruit, but also some grainy malt, some yeast, and a hint of floral and spicy hops. The flavor, however, delivers on the promise of raspberry, and I can only assume it's real because the label doesn't state otherwise. It's right up front, and the tripel itself - malt, yeast and all, follows. It works, and it's quite interesting. It delivers raspberry and then malt that gives it a creamy aspect and some sugar, and then phenols/spice and a light bit of alcohol followed by a dry finish with a hint of pine and spiciness. I'm guessing at this point that others reviewing this beer have questioned whether or not it's a tripel, or whether it's a fruit beer. I'll go with fruit beer. It would fail as a tripel with all that fruit. And thus, it's quite nice. The strength is very well hidden, and it's nicely balanced. There's not too much fruit, and although it's sweet it's not cloying. Medium bodied and gently crisp. Interesting and refreshing with a little bit of oomph! Worth trying!

The approved pic looks a little washed-out, which is why I do not use a flash when taking my pics. The bottle has a very pretty label with shades of pink such as magenta, raspberry, hot pink & the hippo (river horse) sports a raspberry beret! Ha.

From the bottle: "Belgian-style Ale".

I Pop!ped the cap, but gazing lovingly at the bottle, I noticed a lot of lees on the kick, so I began a VERY gentle pour. Once completed, an in-glass swirl raised two fingers of foamy, pinkish head with decent retention. Color was a pinkish-Amber (SRM = N/A) with NE-quality clarity. Nose was unquestionably raspberry, but with a perfume-y sweetness. A little too close to cloying for my taste. Mouthfeel was medium. The taste was very much of tart raspberry, underlain by a bready sweetness. OMFG! This was dangerously drinkable. There was no indication of its ABV in its drinkability. Finish was semi-dry, more towards a Rose wine than a dry beer. Phew! Man, this had "DANGER!" stamped all over it.

Appearance- Raspberry in color. Deep reddish-pink. The head a light pink hue to it was well. Head with good retention and lacing. Very hazy, can't see through glass.

Overall- Lighter in body than I expected. The alcohol burn is not disguised. Plenty of heat. For that, I'm gonna knock this beer a few points. The 10% abv is not hidden at all. Good fruit flavors though.

12 oz bottle poured into a tulip glass. Comes in a 6-pack. Belgian tripel with raspberries. Became popular at their annual cask festival and decided to put it in production. Website says they use pilsner and caramel malts and boiled chinook, saaz, and hallertau hops. Raspberries must have be added in secondary fermentation.

L - caramel amber color with a ruby red tint. Semi clear, no haze. Hard pouring gave a nice two finger head which disapates to a standard issue ring. Lacing is little to none.

S - Belgian yeast really mixes well with the sweet raspberry aroma. Does not go far from there, no hop or malt aroma.

O - pretty nice beer. Not up my alley but a very nice concoction. I was hoping they would go the Sour Monkey route but the addition of raspberries to the basic tripel furthers the style. Thanks Ted for the beer! Cheers!

I like the original tripel but this was more enjoyable. Copper/orange color with a yeast,fruit,spice aroma. First taste the raspberry was strong and prominent then the Belgian style followed. As it warmed a bit the taste became more tart and sour with the alcohol being very noticable. Sort of a rough less polished version of a tripel but very enjoyable if you are having just one beer.