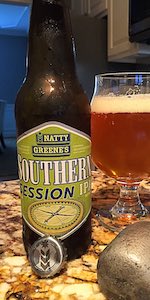 Notes: They say it's about the journey, start yours with the Land of Pine. Southern is highlighted by two adventurous hops, Cascade and Centennial, giving this Session IPA big citrus and pine flavors.
​
A light malt profile balances Southern making it a session ale perfect for every excursion no matter the destination.
​
*The compass on here isn't real, so if lost, just start crushing beers.

Drinking this at home due to the ongoing pandemic that means you can not get a proper pint any where
Poured from a bottle into a pint glass.
Appears golden clear, with a foamy, lightly tan head and rocky lacing.
Smells piney, bready and citrusy
Taste follows the nose.
Mouth feel is medium light for the style.
Overall a nice IPA that I might order again.

Pours a fairly clear golden color with medium head. Pine and citrus lead the scent, with malt in the background. Taste follows, with a good bitter bite that fades pleasantly. Medium mouthfeel and an aftertaste that starts sweeter and finishes with light bitterness

Pretty good session IPA. Had it on tap at Amos Mosquito's in Atlantic Beach NC. Light hazy copper/amber color, medium size white head with decent retention and lacing. Mild piney and citrus hops in the aroma and the same in the flavor along with dry, biscuity malt. Bitterness level was pretty good. Overall flavor not bad for a sessionable IPA. Mouthfeel is crisp, nicely carbonated and a little on the light side. Good session beer, depending on beer selection, I would order it in a restaurant again.

Poured from a 12 OZ bottle into a pint glass. The appearance is a semi clear copper color with a small white head. The aroma is citrus and pine hops. The taste follows the nose.

Hazy copper-amber body with a fine white head. Good lacing and retention.
Notably sweet and fruity notes. A bit bitter but not as expected for IPAs. A dry finish.
Lacks the bite I expect but, at only 5% ABV, not so surprising. Middle of the road ale. Very easy to drink but I would consider this to be difficult to pick out in a flight of ales.

Hazy copper-amber body with a fine white head. Good lacing and retention.
Hoppy and fruity aroma.
Bolder flavor than average for a session IPA, with a bit lower bitterness than expected.
Soft but lively carbonation in a light-medium body. Dry finish.
Overall: as bold as expected in an IPA.

A: Pours a clear golden honey in color with moderate amounts of active visible carbonation rising from the bottom of the glass and faint amber highlights. The beer has a two finger tall sudsy foamy light beige head that slowly reduces to a large patch of thick film covering the entire surface of the beer and a thick ring at the edges of the glass. Significant amounts of lacing are observed.

S: Moderate aromas of pine and citrus/grapefruit pith hops over the top of a light to moderate aroma of cereal grain malts.

T: Upfront there is a light flavor of biscuit, cereal grain, and toasted malts with minimal amounts of sweetness. That is followed by moderate flavors of pine and citrus/grapefruit pith hops which impart a moderate amount of aggressive bitterness which fades away fairly quickly.

M: Medium bodied with moderate amounts of carbonation. Light amounts of dryness in the finish.

O: A little better mouthfeel than a lot of other session IPAs out there but also a fair amount higher in alcohol than those (which are usually lower than 5% ABV). Easy to drink but just not that interesting a hop profile. Probably will not seek this one out again.