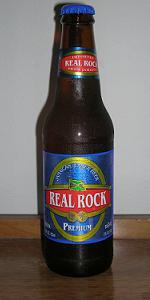 Reviewed by jampics2 from Ohio

Looks golden but slightly darker than Red Stripe and Carib. Head actually sticks around for a bit, not a bad start.

The smell is much better than the two adjunct beers I compared it to. Nothing offensive going on, just some sweet malt and noble hops

Real Rock tastes horrible IMO. Sweet, malty, and corn are the flavors, all distinct without an underlying connection. The noble hops add a snap of bitterness. Some metallic edges are noted. Just a mess of a beer.

Mouthfeel is light bodied with decent carbonation. This was probably my least favorite beer because of the way the taste was a mess. I prefer Carib by a landslide.

An almost pastel shade of light banana yellow. A lava like surface of head sprawls itself across the top. Responsive and lightly clingy. Bubbles are consistent, but always in single digits. Even without the beach and palm trees behind it, the beer looks pretty good.

The smell is dense with the smell of corn like adjuncts. It pounces at the nostrils instantly and thoroughly attacks every part of the nasal track. A light whiff of salty crackers. I wish there was a way to keep my nose out of the glass while taking sips.

Real Rock is largely tasteless, probably a positive for a style often diluted with corn, rice or other adjuncts, and certainly not a bad quality for something usually sampled in extreme heat, under the beating Caribbean sun. That being said, I'm in Toronto, where it is a humid 28 degrees in mid-July, and I'm not finding it terribly refreshing.

All this said the beer can be consumed without disgust or offense. If only this had a little more malt, or a touch of hops, I could consider this a decent pilsner offering. Having a macro lager that is neutral in taste and absent in texture often works out to be a good thing. And it is.

Indeed, for what it is Real Rock drinks well for a macro lager, but is far from anything I'd generally drink ... less maybe on that hot Jamaican beach... assuming it was served cold!

Reviewed by DrJay from Texas

2.53/5  rDev -14.8%
look: 2.5 | smell: 2 | taste: 2.5 | feel: 3 | overall: 3
There were always a couple of bottles in our fridge at the resort, so I ended up drinking a couple of these because they were there. Real Rock came in a clear glass bottle and poured a straw yellow with chill haze. There was a short-lived, soapy white cap that settled to a thin collar and skim of bubbles that were supported by the carbonation. The aroma was mostly cereal grains with slight fruitiness and a bit of strange spiciness, almost like cloves. Quite sweet with very low bitterness, more cereal malt and a bit of veggies, plus the same weird spicy thing going on in the finish. Slight fruit character. Light bodied, but fuller than expected, though it did get a bit watery in the finish. High carbonation kept it lively, but residual sugar killed any crispness. Fair drinkability, especially in the heat. But make sure you drink it while it's cold, because it doesn't get better as it warms. And that odd spicy character was present in every bottle I drank, which ended up being several over the course of a week.
Apr 30, 2008

Reviewed by JMH_ from New Jersey

There is really nothing to the aroma: faint sweetness (far less than anything else I sampled in Jamaica) and the most corn presence (which I didn't really detect at all in any other brews there) of anything I tried.

The flavour is more of the same, with the faint sweetness here again along with some cereal notes and some metallic characteristics as well. Weird and not terribly appealing. Mouthfeel is very light and a touch overly carbonated as well.

First off, there is no way this is an American Amber. It's not even close. It's an American Macro Lager all the way in my book, and not a very good one at that. It was easily the worst beer I had while in Jamaica. There are far better options on the island. Go with just about anything else over this one.

Reviewed by kimcgolf from Georgia

3.08/5  rDev +3.7%
look: 3 | smell: 2.5 | taste: 3.5 | feel: 3 | overall: 3
I'd like to say that it was interesteing? But it wasn't. I'd like to say 'good beer'. But it isn't. Though it's not good beer, there's little to criticize either. Pouring a familiar yellow with a decent fizziness and low level head retention. Smells grainy and sweetly of corn sugars. Tastes better but still with grainy, confectionate sweetness that come across artificial. Graininess never reaches astringent levels, but noticable all along. There is a light creaminess and slickness to the texture that is both a compliment and a detrement. Finishes ligthly acidic (apples) with a persistent slickness. In comparison to most south-of-the-boarder brews, this one is better than average.
Jul 03, 2006

It smells like beer used to, with malt and hops clearly present but non-distinct.

It's crisp in the mouth with a medium-light body and median carbonation.

The flavor is exactly as the nose suggests, with a straight-forward, cereal-like maltiness (it appears to be all malt) that's accented by lightly floral, gently grassy, and subtly spicy hops. It's well-balanced by a firm bitterness, and it finishes short and dry with just a little bit of residual malt and hop left in the mouth.

I was expecting less, and am glad to say that Real Rock is a decent, well-made, European-style lager.

Reviewed by clickpush from Pennsylvania

Nose: Smells of brown sugar and grass. Very light aroma, even after agitation. I don't pick up on any complexity or depth in there. Maybe a bit of hoppy bitterness and a vinegar sourness that worries me a bit.

Mouth: My first reaction is to the cereal/grain like sweetness, but as it progresses further back my sour buds along the sides of my tongue are really raising alarm. It swallows with a light bitterness and a hint of kitchen herb (thyme?), but it's very faint. That being said, by the time I got to the bottom of the glass this beer had completely deteriorated and had become so repugnant that I had a hard time swallowing. I'm not sure if it was the temperature change or oxygen exposure, but the light enjoyable flavors that the glass began with were replaced by what I imagine the spilled beer on a bar floor at 2 in the morning would taste like. Ech!

Reviewed by RoyalT from Michigan

Smell  The light rice and creamed corn did in this nose rather quickly.

Taste  The creamed corn continues with a light taste of alcohol from this 5.0 ABV Jamaican beer.

Mouthfeel  This is light-bodied with some decent carbonation.

Sinkability  I cant see finishing a bottle of this in the fall.

Reviewed by putnam from Michigan

4.27/5  rDev +43.8%
look: 4 | smell: 4.5 | taste: 4 | feel: 4.5 | overall: 4.5
Dim for a pale light lager, golden rather than straw yellow. Cracked, toasted cereals and wild grass perfumes are discernable on the nose. Powdery dry in spite of the strong suggestion of malt flavors. Schnizzled texture and whistle-clean bitterness laces up an otherwise open arrangement of sweet buttered biscuit and laid back umami sensations. I read no hops flavors other than the neutral, slightly bitter grip on the finish. Very nice, highly drinkable lager beer.
Aug 01, 2005

Reviewed by Brent from Kentucky

2.98/5  rDev +0.3%
look: 3 | smell: 2.5 | taste: 3 | feel: 3 | overall: 3.5
Poured a yellow-gold. Aroma was a bit off with some light skunky aroma, but not enough to be a significant problem. Flavor up front was a distinct grapey hops flavor, which struck me as a Bavarian influence. This was followed quickly by a distinct cereal and cooked corn malt flavor. While the two elements sound as if they would be in discord, surprisingly, they did not conflict. Not very impressive, but, at the same time, not unpleasant - I'd probably pick this over Red Stripe.
Jun 16, 2005

3.37/5  rDev +13.5%
look: 3 | smell: 3.5 | taste: 3.5 | feel: 3.5 | overall: 3
An odd and interesting find here in Greensboro today I had no idea there was another Jamaican lager beer.Pours a light gold with a fluffy one finger head that is gone pretty quickly,I picked up some heavy toasted grain notes with a touch of grass much better than expected.Taste is quite sturdy toasted malt light fruity notes with a iron-like flavor that lingers in the finish.seemed to get a little heavy after awhile wich was a little odd but still above average.A pretty sturdy flavorflu lager quite nice.
Nov 21, 2004

3.48/5  rDev +17.2%
look: 3.5 | smell: 3 | taste: 3.5 | feel: 3.5 | overall: 4
I've been to Jamaica many times, and I have never seen anything on tap anywhere except the ubiquitious Red Stripe. So when Alewife and I stopped by Sandals Montego Bay (on a side trip from Sandals Royal) for dinner, I did a triple-take upon seeing the tap handles at the bar for Real Rock, along with a large wall-sign above the bar reading "Real Rock Premium Jamaican Lager Beer". What the &*[email protected] is that?!? Well, I had to give it a shot, eh?
It poured a yellowish color, with a fair amount of cloudiness within. Head was quite short and thin, just wispy bits of white foam around the rim, with a smidge of lacing. Nose was very much on the mild side, but what I did pick up was some grassy hops and even a hint of citrus. The Rock was semi-smooth on the tongue, with a low level of carbonation, yet it was less than medium body-wise. Flavor had a slight, crackery malt aspect to it (very slight) along with a light citrussy tartness. Reminded me very much of a Witbier, though that's an ale. A decent, quenching bier, especially in the Jamaican climate. I enjoyed it much more than the Stripe. No clue what style they were shooting for, though.

Reviewed by mschofield from Massachusetts

3.42/5  rDev +15.2%
look: 3 | smell: 3.5 | taste: 3.5 | feel: 3 | overall: 3.5
Wasn't quite sure how to characterize this, amber lager seems most fitting as this is adjunct free, mass produced adjunct didn't fit.
A medium yellow, slightly hazy topped with a one finger white head, leaves full rings of lacing.
A good light malt aroma, almost a wheat beer tang to it, sweet.
Grassy taste, light toast note, lemon, a bit tart. Sour-sweet reminded me of "lemonheads" candy.
Light bodied, a bit spritzy.
Noone else in Jamaica was drinking this, bartenders and waiters actually tried to steer me towards Red Stripe everytime I ordered it. It's an average beer, but it is brewed without adjuncts and a good alternative to the macro adjunct beers when the weather is hot.