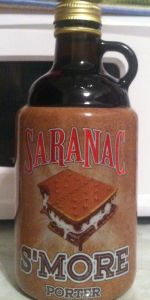 Notes: This porter tastes like chocolate, marshmallow, and graham cracker. It's brewed with a blend of caramel, biscuit, brown, and roasted malts and aged with chocolate and vanilla.
View: More Beers | Place Reviews
Recent ratings and reviews. | Log in to view more ratings + sorting options.
Rated: 4 by TommyW7

L - Pitch black with a one-finger tan head that goes away fairly quickly. Wonderful lacing!
S - I'm concerned - in a good way! Graham cracker, milk chocolate, and cane sugar. A bit of lightly-roasted coffee. Malty for sure.
T - Toasted marshmallow, breakfast cereal, graham cracker, and milk chocolate. Notes of caramel and very light hint of coffee towards the finish. A bit of spice, like cinnamon or nutmeg. It's definitely sweet, but sweet like toffee is sweet.
F - Full-bodied, with medium carbonation. Sticky. Clean finish. Fairly drinkable.
O - I'm drinking this by a fire with friends next bottle instead of at my desk. Not too heavy, but heavy enough. It's almost disturbing how much it tastes and smells like a freshly-made s'more. Highly recommend to those that like the weird.

Rated by jdezelick from Virginia

Reviewed by gestyr from Pennsylvania

3.79/5  rDev -2.3%
look: 4 | smell: 4.25 | taste: 3.5 | feel: 3.75 | overall: 3.75
I tried this beer at a good friend's house in Muscle shoals, Alabama. It poured an opaque dark with ecru head that is leaving some lace. The scent had cocoa notes with hints of peanut and marshmallow. The taste was nicely balanced and easy to drink with sweet milk chocolate base and vanilla and subtle peanut highlights. The mouthfeel was lighter in body with good carbonation. Overall it's a decent beer.
Jul 18, 2020

Reviewed by Lordhelmit from North Carolina

4.67/5  rDev +20.4%
look: 4.25 | smell: 4.75 | taste: 4.75 | feel: 4.25 | overall: 4.75
VERY interesting beer. Poured from bottle to chilled glass. It poured a nice dark stout color but was clear. Finished the pour with a 1.5 finger fluffy tan head. Nose was dominated by a nutty chocolate and coffee, emphasis on the nutty. I don't smell smore here, but the smell was great - that nutty coffee chocolatey smell was yum. Taste was very much what you would expect from the nose - nutty chocolate and a backend finish with a toasted toffee wave. Mouthfeel is as expected for a sweet stout, medium. This is a great beer.

I've no idea how other people are smelling graham cracker or marshmallow, that smell simply is not present. I feel like they are swayed by the name of the beer. Absolutely no cinnamon lol

3.98/5  rDev +2.6%
look: 3.75 | smell: 4.5 | taste: 3.75 | feel: 3.75 | overall: 4
12 oz bottle served in a lager glass
This has a dark reddish-brown body with good clarity and a decent beige head.
Really pleasing aroma with a mix of graham crackers, vanilla, roasted nuts, caramel and marshmallows. The flavor carries these same elements but in different balance and is not nearly as pleasant or rich.

4.24/5  rDev +9.3%
look: 4 | smell: 4.25 | taste: 4.25 | feel: 4.25 | overall: 4.25
Poured moderately hard from a bottle into a snifter glass, resulting in 2+ fingers of frothy tan head that eventually faded away. Slightly translucent brown color. Smell is primarily graham cracker. Taste is probably the closest I've had to s'mores, with graham crackers favored but still notes of chocolate and marshmallow. Not too sweet. Light bodied with medium carbonation. Definitely worth having more.
Jan 10, 2020
Rated: 2.97 by Ltdsaint from North Carolina

S: Really deep sense of chocolate marshmallow. Sweet dark sugars mix with a dry cinnamon graham cracker like backing. As far as intentions are concerned, nailed it with a strong, sweet and chocolaty-marshmallow factor. Toasty graham and sweet waffle cone, really dark chocolate that lasts deep into the experience.

T: The flavor unfortunately was not as intense, or outstanding as the nose. Chocolate-graham cracker malting, hints toasty malt and lots of marshmallow support. The malty felt a bit thin, the flavor watered down from aromatic anticipations, and is thin in substance compared to the nose. Dark rich chocolate, and cinnamon graham cracker spicing with some waffle cone and coffee like accents. Hints of dark sweet fruit, plums are also there.

M: A light to medium body, again, a little bit thinner then what was hoped for in terms of style and specialized flavoring aspect. Light carbonation, oily feel.

O: Overall the nose really brought you in, but the flavor was a bit of let down and thin in terms of anticipation and not as rich or powerful as hoped for. The nose was clearly the strong point here, the flavor decent, but the substance and variety as well body was a bit thin settling somewhere between a 3.25 and 3.5. Really sweet dessert style like drink will no doubt limit multiples. The nose delivered a hard act to follow.

Notes via stream of consciousness: 6.2%, eh? Maybe we've got a solid porter here underneath whatever flavoring they've used. It's a clear, almost black dark-brown with dark ruby highlights when held to the light. The head is a short cap of tan foam. It doesn't appear to have very good head retention but we'll see. The aroma is nutty, chocolatey, caramelish, and sweetish with what seems like vanilla-sugar. It smells good; it smells like a dessert beer. The flavor follows but it's not nearly as sweet as the aroma suggests it could be, which is a good thing otherwise it would probably become cloying. I first got chocolate, and then caramel, but in subsequent sips I find the vanilla and sugar first. There's a kind of a shortbread flavor to it, and also a hint of spiciness. What's in a S'mores, a Graham Cracker? I'm not sure what spices are in there but, yeah, it tastes like a Graham Cracker. I get that mostly in the lingering finish though. It's got 22 IBUs according to the label, which seems about right, The spice probably helps a bit, and it doesn't seem sweet in the finish. There is a note of sweetness, yes, mainly the vanilla-sugar thing, but it's actually surprisingly fairly dry. In the mouth it's medium bodied and gently crisp. The head which dropped on me initially has persisted and continually maintained a thin but solid surface covering, and it's left some very nice lacing behind. I'm not sure I'd want to drink more than one of these in a row, but it's charming and enjoyable for at least one; and I do think it would make a very nice dessert beer.
Review# 6,518

Feel is crisp for a porter, but it's welcome, heavily in the medium body territory, with earthy dryness on the finish.

Overall, a really tasty porter that I'd gladly seek out again.

T - Taste isn't is nowhere near as intense as the aroma. Chocolate, graham cracker, and marshmallow.

Flavors are lightly present and balanced, exhibiting tangy graham and cocoa with a hint of marshmallow and root beer via a medium-thin, smooth round drinkable body with a moderate froth that finishes semi-wet.

T/F: Roasted grains and sugars... not as sweet as the nose would lead you to believe. Good chocolate flavor... mild coffee... cookie/graham cracker comes through. Nice bitterness for balance. Light vanilla... medium bodied with creamy carbonation.

O: Not a bad beer... not as sweet as expected and surprisingly drinkable. The flavor melange mostly works, and I can actually see where they got S'more from. Not one that I'd drink often but a solid change of pace.

Rated by Jeffgerace from New Jersey