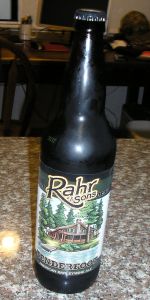 A solid example of the style, well worth seeking out, some Christmas Pudding in this one

Poured from a 2014 bomber into a snifter in about 8oz increments starting at about 45F: Letting the liquid hit the bottom of the snifter, the pour produced a two finger khaki head that stuck around for a few minutes and dwindled down to a film with specks of lacing. Smell is caramel, plum-mango-peach, fig, licorice, cocoa, and awesome. Taste is caramel, toffee, coffee, a mix of dark ripe fruits that leave only a slight bitterness, but the other flavors stay on the palette for a good long while. Alcohol is not detectable in taste or smell, but can be felt from within. Carbonation- since I naturally released a lot of CO2 pouring a large head, it made the beer less acidic, and all these flavors just start jumping out. This beer has aged tremendously well, needless to say. There is enough carbonation to get the flavors to every corner of the mouth, but overall low carbonation. As the beer warms the flavor profile becomes more complex and exciting. I'm drinking probably 55F now and still no alcohol anywhere but the warmth in my abdomen. I didn't think this beer would age this well, but boy was I wrong. If you can find a 2014 Tenderfoot bomber, buy it. At 11.5%abv, one bomber is just right for me, and a bomber of this is $6.99. It's my second favorite Rahr beer, second only to the Bourbon Barrel Winter Warmer.

On tap at the Ginger Man. Dull pour, aroma hints at wood notes, brown sugar. Taste follows with more sweet malt, the proceeds with some gentle alcohol burn. Not great, but pretty tasty.

Thanks to Skuter, ChewyLewy, and scribe594 for sharing this one at Skuter's tasting.

Pours a hazy copper with a foamy khaki head that settles to an oily film on top of the beer. Tiny dots of lace form around the glass on the drink down. Smell is of malt, brown sugar, caramel, and citrus zest aromas. Taste is much the same with citrus zest and brown sugar flavors on the finish. There is a mild amount of hop bitterness on the palate with each sip. This beer has a lower level of carbonation with a slightly crisp and dry mouthfeel. Overall, this is a pretty good beer with a nice citrus zest and brown sugar presence all around.

650ml brown glass bottle with uninteresting label art and branded pry-off pressure cap acquired at a local bottle shop and served into an Avery stem-tulip in low altitude Austin, Texas. Reviewed live. Expectations are average on account of the brewery. Reviewed as an American barleywine because the label clearly identifies it as such.

Served chilled and allowed to warm over the course of consumption. Side-poured with standard vigor as no carbonation issues are anticipated.

Pours a one finger wide head of pale khaki colour. Decent thickness. Okay creaminess. Complexion and consistency could be better. Head retention is below average - just over 1 minute. Spotty inconsistent lacing clings to the sides of the glass when I tilt it, but little actually sticks.

It's far from unique or special for a barleywine, and I'm a bit surprised by how dark it is. I'm optimistic, but I've seen far better appearances in beers of this style. That said, there are no obvious flaws.

Sm: It's quite a timid reticent aroma overall; I'm shocked by how light it is. With effort, I pick up faint licorice, dark malts, a hint of something akin to marshmallow, some viney fruity character, anise, and some kind of spice - maybe cinnamon or nutmeg?

Other than that, I don't find much. There's no overt hop profile, alcohol, or yeast character.

Not as strong and inviting as the best barleywines I've had, but subdued is fine in an aroma. I do wish my nose wasn't broken so I could pick up on more. It's inoffensive, but uninviting.

T: Soy sauce, vague/indistinct dark malts, a kiss of licorice/anise, and maybe some spiciness? Sticky medicinal fruits. I'm really reaching here to describe notes because what little is present is extremely faint. The depth of flavour is shockingly low; this may be the most shallow barleywine I've had in the last year. Painfully simple without any real commitment to its constituent flavours. I'd say the brewers seem unconfident. Not only does this lack subtlety, complexity, nuance, and intricacy, it's also just plain bland. Very boring.

I guess it's balanced in that there're few notes to take into account. It's got a general cohesion but isn't gestalt.

No yeast character, alcohol, or hop character comes through.

Not a tasty brew by any means. Where's the flavour?

Mf: Smooth, wet, sticky, and thick. Full-bodied. Has weight on the palate, but I wouldn't call it heavy. Decently carbonated. Subpar presence on the palate considering the style. The texture doesn't suit the style or flavour profile particularly well.

Dr: I'll finish the bottle fairly easily, and it's drinkable enough, but it's a damned insipid try at a barleywine. There's just nothing going on here. I wouldn't trifle with this again. Give me a confident failed attempt at a style over a safe bland success at one any day. Disappointing.

Poured from a bomber into a pint glass. Dark amber with a thick beige head and lacing down the glass. Nose is low hop, but lots of sweet malt. Hints of toffee underneath.

Taste is good. Sweet roasted malt heavy in the profile, but not much else. One of the knocks on Rahr beer is the lack of complexity. This one is better than most, but still feels like it needs something else.

Mouth feel is incredibly creamy. I was surpised by the smoothness which really benefits the beer.

Good for a local offering and I am quickly becoming a fan of the Barleywine style.

Nose is a nice combo of choco-taco maltiness with some toffee/caramel and a fair whiff of leafy hops.

Taste is rich, smooth and malty...well Ill be damned, Im impressed with Rahr this time! It is
a fairly different take on a Barleywine with the low hop profile and darker malt flavors, but
I think it works well. The malts seem to even flash chocolate at some points, bordering the
lines of a porter even. Fruity yeast is very low, the complexity suffers a bit for it but not a
huge deal. ABV is well integrated and drinks a few percentage points lower than it is. This
would be a great beer to barrel age I think. For the price, Im going to have to go pick up a
few more of these...me likey.

A: The beer pours a dark brown body, with a thin tan head that creates a slight ring around the glass and leaves a nice amount of lacing as the head fades.

S: Rather boring to me, but that's how I feel most Rahr beers smell. Im picking up some slight sweet grain, with a tiny bit of bitter hops?

T: Toffee, sweet brown sugar and molasses are the first type of flavors that really hit me, but then it fades to a sweetness. Not very bitter at all for a 70 IBU beer, but it eventually comes through the longer you drink it.

M: The beer has a very thin body, with a tingle of carbonation. The beer goes down very easy.

O: This is an okay beer from Rahr. I like the fact that it was only $6 for a bomber, which isn't bad at all for the price. I wouldn't turn this down at all if offered again.


Tenderfoot from Rahr & Sons Brewing Company
Beer rating: 86 out of 100 with 56 ratings