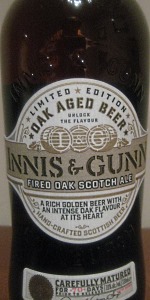 Overly sweet, with smoke in the finish. Marginally drinkable. Could have been a lot better based on the marketing. LCBO offering.Not hitting the mark, Like most of their offerings over recent years.

L:
-pours a clear amber with a small to medium,foamy,offwhite head
-low to medium carbonation visible
S:
-plums,caramel,vanilla,woody,coconut coming on later
T:
-Follows the nose plus some slight nuttiness and a syrupy sweetness
-low bitterniss for the style
F:
-medium carbonation
-light to medium body
-no alcohol detectable
O:
This had a lot of Problems.Very much a one note Ale with not enough Body

Appearance: Clear and golden amber, a good finger of pastel orange hued head. There is a little bit of lace at the start but eventually disappears altogether. It has that colour I REALLY like not matter what the liquid - it's warm yellow and crystal clear just psychologically promotes a flavour you hope is there.

Aromatics: A sweet malted scotch with charred oak and a hint of a floral vanilla and biscuit.

Taste: Ive had a lot of the Innis & Gunn offerings - I always appreciate their oak aged flavours, but this one is particularly nice in comparison. The scotch and oak uptake really provides a nice smooth profile that has a sweet and malty start then moves to a bit of the scotched flavour finishing clean with a hint of fired oak wood that really reaches all points on the palate. But that is really the extent of it - it's better than most of their other oak aged beers, but doesn't go over the top in trying to really push its oak, scotch or age.

Mouth: A soft and warming medium body. Touches of bitterness that keeps a good deal of carbonation from getting too rambunctious in the mouth. Just the slightest of boozyness at the tail end but the warmth really mutes that sensation away in short order.

Overall: Of all the I&G, I think this one is my favourite (so far). It has a great balance and the scotch does not come in too heavy, or over the top. But at the same time I was expecting it to wow me, and it really didn't, despite its tastiness, it was kind of anti-climactic.

Pairing: I think (as is the usual case with scotches and whiskeys) I want to coax out some additional flavours with a bit of spice and some "fattness". I recently made a garlic and harissa shrimp alfredo with angel hair pasta that this would go great with. The rich garlic sauce and harissa spice, which should open the palate to additional flavours in the brew.

Copper and filtered with a little carbonation. A fizzy white head that dissipates fast.

Great concept. Lots of nice qualities coming through, but its rather lacking in body and consistency. The soda like qualities in the mouth feel and overall carbonation, detract from it. Still, it is a good beer for the style. I got it in Toronto LCBO near Wilson, not far from Yorkdale Mall. Drank in Stouffville, Oct 16th, 2016.

Taste - like the nose. Smoke, a little peat. Vanilla with middling bitterness. Scorched wood. One of the better representations from this brewer.

Overall - one of the better Innis & Gunn representations in the style and one the whole. If it weren't for the price, this would be a repeat purchase.

A- This one pours a very nice copper/bronze color that perhaps has tones of char, oak, orange and red hues. The head is virtually non existent but does leave a ring of white colored foam with thin wisps throughout the top of the liquid. The lacing is modest and provides a bubble like patchwork on the side of the glass. Overall I'd call this one slightly above average.

T- Intense butterscotch, vanilla, oak, whisky, with lesser notes of coffee, char and hints of smoke right at the finish....almost like a campfire essence! The finish provides a cleanliness that is just enough, yet the overall flavors stick to the palate afterwards...

M/O- Medium bodied and well carbonated, which allows the flavors to explode on the palate! This is one of the nicest Innis & Gunn brews that I've had and I think it compares to the Rum Finish in taste and quality! I will most definitely seek this one out again and highly recommend this to anyone!

330ml bottle - THIS particular Innis & Gunn offering was 'created to celebrate oak maturation'? Haven't they all been?

This beer pours a clear, medium copper amber colour, with three fat fingers of puffy, loosely foamy, and somewhat creamy off-white head, which leaves some spooky swirling mist lace around the glass as it evenly subsides.

The carbonation is quite active in its thorough, if kind of thinly-rendered frothiness, the body a solid middleweight, and mostly smooth, the supposedly smoked wood maybe adding a hint of clamminess to the proceedings. It finishes on a sweetness bender, hell bent on rotting both my teeth and my better senses.

Yup, another clusterfuck from this Big Oak-obsessed contract brewer - here, the claims of using toasted oak 'taken to the point of catching fire' (hence the name) are generally unsubstantiated. This is sweet 'n malty all the way, which, for the style isn't that big of a deal-breaker - it's the bare-bones simplicity, man.