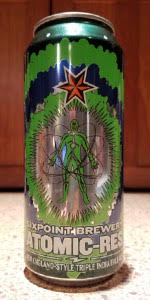 Notes: The particles left behind when Idaho 7 hops are processed were scraped into hash and featured in this beer. Full on atomic juice bomb status.
View: Beers | Place Reviews
Reviews: 24 | Ratings: 56 | Log in to view all ratings and sort
Reviews by artrocity:

Saw the label, big ole atomic dude with claims of a juice bomb to blow me away. Looks good, like a very quality brew. Excellent head. Nice soft hazy color. Smelled like a NEIPA. Excited to delve in... UGH! My god that is sweet. I gave several more imbibes to ensure it really did taste that bad. I had to give it to my gf to confirm my thoughts. She LOVES hard sweet cider and rieslings. She made a wince, and refused to drink any more, was too sweet even for her! I couldn't stand to drink any more and dumped it down the drain. This beer is exceptionally sweet, I can feel my dentists disappointment. I hate to say, its just plain terrible. Should never have left the production line. There needs to be more balance guys! I've had sixpoint before and they are generally a good brewery. Avoid this beer!

Poured into a tulip from can apparently packaged on the 28th day of this year (BB 26 Jul). Murky dark orange with thin head & little lacing. Smells of very ripe tropical fruits and somewhat medicinal citrus. Flavor improves with bright fruits followed by sweet & spices notes on the swallow. Alcohol is present but not overwhelming. Thin, slick mouthfeel is nice and conducive to sipping. Overall a tasty eye-opener of a beer. 16 oz. would be better shared for old guys.

16 oz can. Pours semi hazed golden with a two finger head which is gone fairly quick, some lacing.

Nose is citrus. Mango, orange peel and slight hops in the back.

big beer that delivers!
L: it's a pretty one. hazy yellow with a medium head that lingers
S: somewhat subdued but i like it. sweet, mango, pleasant but not strong.
T: totally delivers. take the smell and multiply. rich ripe fruit, mango, just a hint of bitterness in the finish. it is really delicious, with the abv totally hidden. dangerous!
F: smooth and rich. creamy. excellent.
Outstanding job!

One of the worst beers I've ever tried. Incredibly sweet.

Had a can of this and poured it into a shaker glass.

Notes via stream of consciousness: So this is a "New England-style Triple India pale ale"? I'm not sure I've ever had one. How strong is it? Geezbus, it's 11.8% ABV! Ahh, I also see that it notes zero IBUs, and that it's contract brewed by Victory Brewing Co. It's poured a murky, golden & dark orange body beneath an inch or so of yellowed-white foam. The aroma is hoppy but not really that bright. It's citrusy, malty, and somewhat herbal. I clearly get the alcohol but it doesn't seem hot. I'm also finding some distinct orange that's making me think of Triple Sec. On to the taste... wow, it's sweet. Perhaps zero IBUs wasn't such a good idea in such a big and malty beer. Triple NEIPA? Nah, I don't know what this is but it's not that. I'm thinking more barleywine but that doesn't fit either. OK, let me get my bearings and actually taste this beast... the orange remains and it's a bit like orange marmalade with a splash of vodka on top. The malt is bready, maybe even doughy, but really more biscuity. The label states that it's brewed with Citra, Galaxy, Mandarina Bavaria, and Idaho 7 (in "hop hash" form). I can see the Citra, and the Galaxy as well, and there's a little bit of tropical from the Idaho 7 but it's really the direct orange of Mandarina Bavaria that I get. I think there's so much malt there that the hops just can't get through it in terms of showing a wide ranging complexity. That seems like a waste of hops, but who knows what it might be like with a less complicated hop bill. It's an interesting beer on its own, not thinking of any specific style. "Malty Sweet & Strong Citrusy Ale" would probably be how I'd label it. I've only drank about 6 ounces of it though and I'm done. I'd like to think that it could be a nice after dinner sipper, replacing my usual barleywine or Imperial stout but I'm finding it a little bit cloying, just a little, and I fear it will become more so as it warms. In the mouth it's medium-full in body and dextrinous. It reminds me or an apertif, and I could also see a small glass as a dessert beer. It might also make a good ingredient drizzled over a cake or something, but just as a beer to drink on it's own I'm not feeling it. The carbonation lends a gentle zest to the tongue but I'm longing for a little bit more. Sweet orange lingers in the finish for quite some time, although some minor tea-like character appears once it starts to dry - entirely due to the alcohol as there is no bitterness. Hmmmmm. I can't really recommend this beer other than suggesting you try it to see if you like it, and yet at the same time I can't just trash it score-wise as it does have some merit. I'm giving it points for creativity.
Review #7,028

A: The beer is rather hazy yellow in color. It poured with a half finger high white head that died down, leaving a thin layer of bubbles covering the surface and some lacing down the sides of the glass.
S: Moderate aromas of papayas are present in the nose along with notes of grapefruit.
T: The taste follows the smell and has lots of flavors of citrusy and tropical fruit hops - grapefruit and papaya stand out in particular - along with hints of alcohol.
M: It feels medium-bodied and juicy on the palate with a moderate amount of carbonation.
O: You can definitely get a bit of alcohol in the taste in this Imperial New England-style IPA, but it still retains its juicy qualities.

Upon first whiff I can tell this is a strong beer. It has a honey liqueur sweetness, pine, papaya, mango, and grapefruit.

The taste is exceptionally smooth for its abv. Blood orange and grapefruit upfront, followed by mango smoothie. Biscuit malt and rich honey sweetness in the middle. There's a touch of orange zest bitterness on the back, but smooths out. Warm going down but dangerously drinkable.

Creamy feel, moderately-well carbonated, silky but with some lingering stickiness. Finishes very clean for its style and abv.

I couldn't imagine a much better NETIPA at almost 12%. Stupendous job here, Sixpoint!

T - Tangerine, citrus, passionfruit, and some lime with some tangy dank citrus on the bottom of the tongue. Ends balanced and fruity with some lingering booziness. There's some earthy juicy citrus rind spiciness that begins to build in the back of the throat as I work my way through the can.

M - Thick, slick, and with some warming on the way down.

O - This is a cool beer, just lacks on the nose. Priced right and worth checking out.