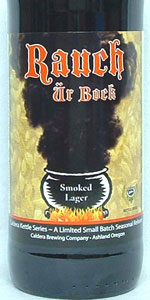 From the bottle, it pours a hazy brown color liquid with a light tan moderate head that stays and stays. In the nose, it is smoke and more smoke. In the mouth, it is very smoky and sweetish. Pleasant.

Appearance - The beer pours a moderate brown color with a one finger head of off white foam. The head has a moderate level of retention, fading over time to leave a light level of lace on the sides of the glass.
Smell - The smell is big and bold with tons of smoke, brown sugar, caramel, molassas, bread, and a bit of char. Overall it smells like BBQ in a glass.
Taste- The taste begins with a sweet bready and carmel/brown sugar heavy taste that has a good showing of smoke upfront. As the taste advanes so too does the smoke taking on some char and burnt flavors as well. While sweet upfront, somewhat unfortunately, the sweet grows as well with more caramel, molassas, and brown sugar coming to the tongue. In the end, with all the flavor transitions, one is left with a nice smokey, but overally sweet and roasty taste to linger on the tongue.
Mouthfeel - The body of the beer is moderate to slightly thinner for a dark, sweet brew with a carbonation level that is rather light. The carbonation was great, but the lighter body did not do the smokey and sweet flavors all that well.
Overall- It had the smoke I was looking for, but lacked any crispness of a lager and was way too rich in sweetness.

I’m reminded of thick, almost opaque amber. It’s so saturated it’s red and the head is patient for a lager and dark fawn brown.

Billows of salty olive and smoked almond. It’s like a can of Blue Diamond nuts or a dirty, dirty martini. It’s the most savory beer aroma I’ve smelled.

Creamy and like velvet due to the perfect marriage of beer and bubble.

It’s a complex and delicious smoked beer; one of the best beers I’ve had recently. It stands out not only because it’s a rare style, but because of the intensity and complexity.

22oz bottle. Pours a dark coppery chestnut with an inch of head. Moderate amount of lacing. Smokey, meaty aroma with some sweet cherrywood, lightly toasted bread and maple bacon. The taste is smoked cherrywood, bacon, maple syrup, roasted malts and charred wood. Smoke and cherry finish. Light to medium body with a creamy mouthfeel. Not much alcohol presence. This is something I would buy again.

From a bottle into a tulip. Auburn color, tenacious lacy head. The smoke is really nuanced and well done. Sweet, rich, a bit viscous. Perfect smoked beer and right there with the German ones in my opinion.

L: Poured from a bottle to a mug. Had a medium brown color and a cloudy texture. There was an inch and a half of foamy, off white, somewhat long-lasting head. Sparse lacing.

S: A nice aroma of smoke, malt, and a slightly fruity element.

T: Tasted of a very pronounced woody smokiness, a fair amount of malt, light fruit, a hint of caramel and toffee, and a tinge of a bready quality. Definitely a well done flavor that's much livelier than most rauchbiers. The smoke is never overpowering (it's most evident in the front of the flavor), which lets the other ingredients come through.

F: A well-carbonated beer with a vibrant finish. Medium-bodied.

O: This is a hard style to get right (too much or not enough smoke), but Caldera has made a drinkable with this one.

Pours clear, amber in color with 3/4 inch head. Taste is smoke, candied sugar, and toasted malt. Medium bodied and slightly sweet. Really tasty and super easy to drink. One of the better domestic rauchbiers out there. Could have several of these.

Dark yellow, amber/light red appearance, clarity, when I think smoke/rauchbiers, I think dark, so that was a little different, good appearance though. Aroma was like a hickory smoker, very nice, exquisite.

Holy crap this is smoky, not my thing, too pungent. Would totally recommend to someone into this style. All my Smoking Wood fans, check it out. So much smoke. . . domineering.

Brilliant dark amber color with beige head. Aroma is smoked ham all the way, along with some sweet toasted malts. Taste is malty sweet with the same smoked ham and sausage. Body is medium and quite smooth. Very nice rauchbier, reminds me of the traditional german variants.

T: Smokey oak & beechwood, a little caramel sweetness & some taffy notes up front. Some cakeyness underneath the smokeyness & dryness as this warms, a little praline flavor as well. Finishes a little dry with fairly restrained smokeyness, & cakey sweetness with a little taffy thrown in

Super take on the style, this is well worth buying. If you like smoked beers, this is your huckleberry, well done Caldera!

Pours a very dark amber with abt a 1/4 inch pearly head. Smell is strong of smoke and caramel. Taste is also heavy smoke with almost a beef jerky smoked pepper taste, finishing with dark fruits.

Pours a cloudy medium amber. Normal head volume, above average retention and lacing. Excellent nose of wood smoke with distinct cherry like sweet notes. It lacks the meatiness of the Aecht Schlenkerla Rauchbiers and is lower in intensity. Light medium body with a somewhat oily texture. Normal carbonation with a bit of effervescence in the finish. The flavor profile is outstanding and follows the nose in regard to Aecht Schlenkerla Rauchbiers (no meat, less complex and less intense). It begins with a burst of smoke over a sweet cherry note. The middle is a subtle bitterness with an ashy quality over caramel sweetness. The finish is a slow fade of smoky sweetness with a slight alcohol note. A very good offering, especially for style introduction purposes, but not in the same league as Aecht Schlenkerla.

Caldera Rauch Ür Bock may have smoke ("Rauch") in the name but not in its appearance; far from black and not the least bit ashy, this beer has the tone of a dried date and actually glistens with colour when held into the light. Were it not for the sediment it'd be clear too.

Bocks are traditionally spring-time beers, but this smoky variation is nicely suited to the holidays - it drinks like chestnuts roasting on an open fire! Well, kind of. Fireplace aromas are certainly present and they are accompanied by hints of nutty, toffee confections and Christmas fruitcake.

While notions of bacon, jerky and smoked cheddar are understandable, closer attention reveals exceptionally clean, pure and concentrated flavours of cherrywood and beachwood. There's absolutely no harsh burnt tastes or any overwhelming bonfire-like smokiness. It's more singed wood than smoke, with a piny, resiny, earthy hoppiness to help accentuate that.

I can't think of a better Rauchbier for initiates. Not only does it have a pure and well-poised smoke character that mimics that of the originals, but it hides its alcohol (a formidable 7.4%) and has underlying dried fruit and gooey caramel sweetness that offers additional and contrasting flavours.

So far I'm concerned, Aecht Schlenkerla is the epitome of Rauchbier. Most brewers and beer writers (and evidently Beer Advocates) agree. So I tend to base my opinions of smoked beers on how they compare and, if I didn't know any better, I'd swear this southern Oregon town was actually part of Upper Franconia. Caldera's Rauch Ür Bock fairs very well indeed.

WOW. Picked this up on a whim from the corner store and I am super impressed. It's pretty much an ideal version of the style. Sweet hickory roasty campfire goodness.

22 oz bomber poured into an Innis and Gunn tulip.

Smells like savory meat. Smoked bacon. Very slight dark fruit. Kind of reminiscent of a Belgian quad, but it is very faint. No caramel malt sweetness that I expect from many bocks.

Tastes smoky and sweet at first. Kind of similar to a ketchup barbecue sauce. Huge flavor of smoked bacon on the finish. Not sure how much I like it. The more I taste it, the more the smokey flavor subdues and some more subtle tastes come forward. A malty sweetness as well a a dark fruit flavor, plum, date. Good mix between the sweet and smokey.

Poured into dimpled mug; deep hazy red with a solid two-finger tan head of sticky lacing that breaks apart after a fashion leaving tons of awesome chunky lacing.
Smells great, like smoked sausage. Smoky, savory, malty.
Tastes of sweet malt and savory smoke. Lots of woody smoke flavor but it balances very well.
Mouthfeel is wet and medium-light bodied.
Overall this is a very tasty rauchbier. Sweet malt and savory smoke play perfectly together. Right up there with the standard Schlenkerla Rauchbier Urbock. Glad to see that Rose Petal mess wasn't an indicator of the rest of the Kettle series.

A: The beer is very dark reddish amber in color. It poured with a thin tan head that died down, leaving lacing on the surface and a collar around the edge of the glass.
S: Moderate to strong aromas of smoked malts and bacon are present in the nose.
T: Similar to the smell, the taste has lots of flavors of smoked malts along with notes of bacon and hints of iodine.
M: It feels medium-bodied on the palate and has a moderate amount of carbonation.
O: I really liked this rauchbier as I felt that the smoke was quite powerful, but not overdone. It seems like it would go well with BBQ food.

Has to be the best rauchbier I have ever had. Great smoked meat, spices, wood, cheese, caramel and grains in the smell. Taste had more of a smoked and caramelized bacon lead, with the aromas from the smell supporting. Sneaky crisp finish, with chewy body, some bubbly sips, and real smoothness.

Poured into a snifter out of a 22oz bomber.

Aroma lets you know right off the bat that this one is quite smoky. Great bonfire/bacon aroma with a little bit of grass and fruit in the background from the hops. Heavy on the smoke, though, which I love.

The flavor is also very smoky but has some more complexities compared to the aroma. More campfire and ash but with some fruitiness from the yeast and perhaps the hops. There is some biscuity malt and caramel along with some molasses. Bitterness is on the light side but the sweetness remains restrained.

Overall, an excellent rauch and one of the better non-German examples I have had. Very drinkable.

The pour is a highly attractive amber-copper color with a modest little head, continuous carbonation, and sparkling clarity.

That aroma blows me away! 5 out of 5! I get burnt, smoky wood as if I am standing next to my woodstove and his grainy malt character intermixing with cherry or cherry wood. I love my smoked beers to smell this way. This is tops.

Medium to full body and smooth.

The smokiness is tad diluted in the taste but it is still vibrant enough to satisfy. The cherry kicks in to balance everything off with a modest bitter bite at the finish. The Bros are right on when thy give this one a "World Class" rating. This may be the highest rating I have ever given a beer on Beer Advocate.

Rauch Ür Bock from Caldera Brewing Company
Beer rating: 90 out of 100 with 143 ratings