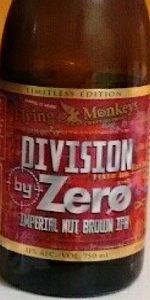 3.5/5  rDev -8.1%
look: 3.75 | smell: 3.75 | taste: 3.5 | feel: 3.25 | overall: 3.25
Division By Zero is frustratingly opaque despite its brown-hazelnut tone; call off the search party for clarity or highlights, it's hopeless. Head, however, is surprisingly and impressively present for a beer of this magnitude; we're talking 'double-D' sized bubbles and tight-as-tattoo lacing.

Having bought this direct from the brewery in autumn 2015 I'm a little disappointed to have just noticed it was bottled September 2014. Now February 2016, I admit I didn't rush drinking this 11% "imperial nut brown IPA", but I now lament the thought of letting any of those Centennial hops go to waste...

That said, judging by the strength of the smell, letting it sit in the fridge for a few extra months likely helped more than it harmed; alcohol can still be noted outright. The leafy, woodsy, almost porcini-like notes of the hops still make a huge impression but don't hide all this beer's warts...

Warts that include a rail-thin mouthfeel and unfocused, indistinct flavour profile that's slowly being invaded by yeast. The toasty, nutty malt typical of a brown ale is certainly present but has to compete with raisiny overtones and a light but brash spiciness (whether booze or yeast phenols or both).

Honestly, short of calling some friends over, I don't know what to do with a 750ml bottle. It's not unpleasant, but it does have the drinkability equivalent of liquid sandpaper; each sip contains a dry, bitter note that's like chewing on nut shell casing with a dank, earthy, compost chaser.

Undoubtedly Flying Monkeys' best beers are their higher-gravity offerings; Paranormal Pumpkin Ale, Chocolate Manifesto and Acadian Groove are some of the best offerings to come out of this province if you ask me. Division By Zero, despite its strength, probably rates closer to lighter, avoidable beers like Anti-Gravity and Stereovision. It's definitely not something they need to brew again.

Appearance - Pours an exceptionally hazy dark brown colored beer with two plus fingers of dense cream like head. Fantastic retention and plenty of lacing left around the glass.

Smell - Complex with pine, a little citrus, plenty of dense caramel malt, alcohol and light nut aromas. Comes together nicely and to my nose was reminiscent of Barleywine.

Taste - Taste's kind of like barleywine too, with some initial bitterness, then malty goodness and secondary flavors like fig and raisin start appearing. A third layer reveals the aforementioned nuttiness, and it's all a melting pot for a slightly sharp alcoholic presence (to be expected at 11%).

Mouthfeel - Smooth and creamy initially, but finishes quite dry. Body is substantial and carbonation is mid-range. Pretty good feel.

Overall - Definitely a good bottle for sharing as while Division by Zero is a well made beer, it can be hard to characterize (DIPA, American Brown Ale, Barleywine?) and the alcohol sharpness catches up with me making it a hard beer to drink a lot of. Still well crafted and one of the beers that indicates that Flying Monkeys is pushing the envelope, without completely going off the deep end. Worth a try with a good friend over lunch if you can get your hands on it.

Reviewed by andrenaline from Canada (ON)

Reviewed by BeerWatcher from Canada (ON)

4.4/5  rDev +15.5%
On tap at the Brewery Market in Hintonburg Park. Pours a medium to dark brown with a thin off-white head. Aromas are of caramel and molasses. Flavours of caramel, molasses, raisins, red fruits, and alcohol. Overall this is no Nut Brown, and all Dubbel. Given I’m not a big fan of nut browns and love Dubbels, this is more than fine with me. Love this beer. Need more.
Nov 10, 2014
Rated: 3.25 by bylerteck from Canada (ON)