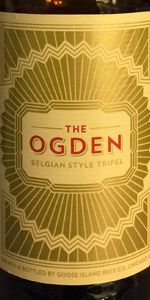 Great aroma. Fresh sweet fruit, soft and mild spice, clean malt.
Smaller than typical very white head. Golden slightly cloudy body.
Note the softness of the feel right away and then an alcohol shot to the gut next. Nice complexity of the pale malt, soft fruit, stronger spice and some honey (I noted sweetness at first but later drinks it wasn't there) all rolling around in a enjoyable way. Quite a bit of drying mixes with the alcohol flavors on the finish. The alcohol is more straight alcohol flavor and less perfumey. In the long run the malt flavors are stronger than the spice and fruit.
Best is aroma and feel. Solid otherwise.
As it warms the sweetness and fruit flavors of the aroma emerge nicely. I bumped up the flavor score.

I bought a 4-pack last summer and Had one per season to watch it change.
Since I joined BA only three months ago, this is my first review of it and it may be my last.
A change in the label may have started this beer off on the wrong foot. Goose used to suggest that you hold its Belgians for up to 5 years... which I never did.
This label gives us 1/2 year followed by a freshness warning. (Is this Bud's "skunk beer" commercial brought to the craft world... I hope not.)

Basically, the Goose (who I still like enough under its new owners) made an experiment and it is not quite right yet. The primary experiment seems to be dry hoping a triple style with American hops. This leads to an interesting aroma, but detracts from the taste. I also think the hops linger longer than is appropriate for this style.
The other major experiment to me seems to be the change of heart in a freshness date: the beer actually was better to me after 180 days, primarily because the hops settled down a bit and the alcohol was less noticeable.

How to improve this beer? The best but hardest thing to do is to replicate a real Belgian yeast that gives this style its "Wow" that so many American brewers struggle with.
Would I have this again? Possibly if I wanted a triple and it was the best in the bar.
Buy it in a store ? Buy only one.

S: Man, this is nice. The Citra and Saaz fight for the lead. Spicy hop and citrusy hop battle it out in front of a light malt sweetness and a clove-y, powdery Belgian yeast. Faint (and I do mean faint) whiffs of alcohol. Not bad at all.

T: This is damned solid. Sweet, fruity yeast character, a little bit of a spicy hop. Some of that clove-y character from the yeast as well, which I don't care for much, but it doesn't detract from the beer. ABV is very, very well hidden. Only a slight warming on the swallow.

M: Slick, somewhat on the thin side, medium carbonation. Finishes long and sweet.

O: Pretty damned solid. I think the addition of Citra as an aroma component is a good choice, but if they used them late on for flavor additions, I'm not getting them. Still, this is easily one of the better American attempts at a Belgian style that I've had to date, and to be fair, one of the better tripels I've had in a while. Easily recommended.

"We dry hopped our Belgian Style Tripel to balance spicy, tropical American hop flavors with a unique Belgian yeast, giving it a bold, more complex palate." Brewed in the style of a Belgian Tripel with Brewers Gold, Citra and Saaz hops. Available in 12 oz. 4 packs and on draft. Poured from a 12 oz. bottle to a tulip glass. Served above 51º Fahrenheit.

This beer pours a frothy cream head of a golden white complexion over a very hazy golden amber body with light streams of relaxed carbonation. Retention is very good, lacing is moderate and streaked. Aroma showcases typical elements of the Belgian Tripel, with a peppery spiciness, biscuity, fluffy malt and a slightly fruity, effervescent yeast strain, but the unique spin on this beer is the pronounced hop profile reminiscent of an American IPA with notes of grapefruit, lemongrass and mild tropical fruit. The flavor further develops the Tripel notes, with a solid malt body of biscuit, pale wheat and a pinch of grain meeting the milder peppery, tropical fruit hop profile and finishing with a wash of white pepper, coriander and mellow spicy esters. Despite an aim of balance and an appropriate bitterness, the hop flavor profile doesn't match the bravado of the Tripel body, to my disappointment. The texture is slightly chewy, a touch resinous and spicy with a fevered carbonation forming an assertive mouthfeel. The alcohol presence is modest but discernible as notably common by the style guidelines, however I did not notice any quality issues or unordinary imperfections. It is still very drinkable for a Belgian Tripel. Overall, The Ogden goes a step farther than a Belgian IPA into something a bit more traditional and no doubt higher gravity. Most seasoned palates will notice a pleasing increase in flavor and subtleties, although the hops play a smaller role than I had hoped, and the Triple notes steal the show. Altogether it was enjoyable but a note shy of exceptional. 3.75

Fruity nose with melon and lime.

Soft and near creamy on the tongue, this is highly fruit infused brew with more melon, lime and other tropical sensations. Tasty and yes fresh tasting. Less carbonated then the typical Tripel.

Great with some nuts, dried fruits, bread and cheeses

Poured from the bottle a clear golden yellow with one finger of off-white head. Sticky lacing left behind.

The taste was as sweet as the aroma. Orange, bubblegum, Belgian yeast, spice and white pepper.

Medium bodied and a bit dry with a moderate carbonation.

An easy-drinking Tripel from Goose Island but a tad too sweet.

On tap at Granite State on tap.
Lightly hazy golden color with a minimal head. Fruity earthy spicy with a sweet bready malty sugary base and a hint of alcohol. a bit hoppy for a traditional tripel, but tasty just the same.

The beer comes in a pale golden straw yellow.

The aroma certainly has light Citra aroma with a orange and dried mango. A hint of alcohol. Along with a big white breadiness with a spicy pepper.

The flavor follows with a bit of that orange peel flavor and fruit nectar in the front along with a punch of peppery spice and herbal grassiness, a light breadiness on the middle, with tons of phenolic nail polish on the finish, along with a touch of alcohol. The flavor cuts off quite early on the palate with a hint of sweetness and then lots of drying.

The beer is dangerously drinkable and has a medium to light mouthfeel.

A decently made beer for the style and it drinks easily. However, it still lacks flavor as the beer is quite empty.