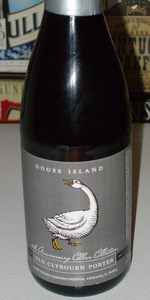 Had on tap. Solid throwback all around. Dark and with a hint of light coming through. Smells of dark chocolate, roasted malt, and light coffee, like decaf I guess. The taste is malt heavy with slight hints of the coffee and chocolate. Little watery

Served in an imperial pint glass at the Clybourn brewpub.

And the Pre-Gold Box Excursion refuses to stop, this time making a brief sojourn at this porter. It pours a deep black-brown topped by a finger of khaki foam. The nose comprises roasted malts, dark chocolate powder, and very light coffee. The taste brings in more of the same, with the roast dominating all else and a twinge of dark greens creeping in near the rear exit. (Gotta throw this in there: "The question mark was emphasized." Those who know know...) The body is a light-leaning medium, with a light moderate carbonation and a sorta/kinda drying finish. Overal, a solid porter, nothing earth-shattering, really, but a tasty offering nonetheless.

Appearance: A thin quarter finger of creamy cream-colored head. Dark black colored body that is mostly opaque with ruby highlights around the perimeter of the beer. 3/5

The label clearly states "Goose Island Clybourn Brewpub, Chicago, IL 60614" so that's why this review is here and not in with the Fulton St. brewery reviews.

A: Pours, with a typical Porter thinness, a dark brown almost black color with a very bubbly light-tan head. The recedes from about three fingers to a whispy skim in no time at all and leaves no lace behind.

S: Hard to get much aroma from this but I was able to squeeze out some roasted malt, tart grain, chocolate, and citrus.

M: Starts out quite roasty and thin but thickens considerably during the second half of the bottle. Cool mixture of roasty, tangy, toasted, and creamy.

D: Excellent drinkability! I enjoyed this bottled version a lot more than the draft versions I've had of this over the last 15 years.

Another wonderful 20th anniversary bottle that I was able to secure from a most generous BA. This was my second foray into the series and I was much looking forward to opening up the 750 ml bottle. Very nice and tough to open wax seal greeted me. Served at cellar temperature in an oversized wine glass. This was consumed on 09/15/2008.

Poured into the glass with a very dark brown color. This one was nearly opaque in its color. Nice two inch head of light tan came up over the top and quickly settled down into a soft layer about a quarter inch high that stayed across the top of the glass throughout the rest of the session.

The aroma was rich with roasted malts. Semi sweet with a noticeable amount of caramel coming through, but at the same time, a very noticeable amount of bittering hops as well. Light touch of peat as it warmed gave it that nice smoked touch. This carried over very well into the flavor. Rich and smoky, the roasted malts stole the show here for at least the first good bit of it. Lots of caramel touches as well as a decent smack of peat and smoky flavors, especially in the finish where it took on a good deal of a dry and bitterness as it washed down. Very nice consistency here, with a subtle, yet noticeable carbonation profile that was just enough to take notice of. Easily a session able porter, there was no trouble at all here with enjoying this one repeatedly without issue.

Overall this was definitely a very solid sample of the style. Was it a knock, no, but it was good in every conceivable way. This is another fine example at how to make an interesting, yet not over the top brew. I was quite impressed by it to be honest, and would love to try it on tap. Score another one for Goose Island.

The beer is dark brown to black with a slightly tan head that leaves good lacing.

The smell is slightly smoky, sweet and malty.

This is a medium-bodied beer with sweet malts that start it off. It then finishes with a mild bitterness. There is a little smoky flavor in there. I didn't catch the chocolate finish they talked about at the pub.

Served on cask in a nonic / gently curved pint glass.

Jet black, head is only a tan ring with impossibly small bubbles in the foam. No lacing.

The smell is dominated by a sour note, very heavy on the funk, roasted. Not picking up the wheat malt described on the menu.

Tastes of sour funk. There should be another way to describe it -- I spent all pint trying to think of the words. I'd experienced this taste in a batch of stout I'd homebrewed and didn't like it then. I didn't like it much more this time around. Is it a yeast byproduct? Contamination? Has the cask damaged the beer? Tastes of leather, with hops barely evident on the finish.

Medium body with light carbonation. Very gentle and complimentary to the brew. The highlight of the beer. Slightly sticky finish.

Couldn't have many more of these, the funk is one note and a dominant note at that. One was an experience, though. Served a little too warm -- close to room temperature.

I had this one on tap at Goose Island Clybourn in Chicago.

A= This porter poured a deep dark blackish brown with a 1.5" dense tan head. Some minimal lacing down the glass.

S= This ale smelled of dark roasted malts, a hint of smoke, and faint earthy hops.

T= The taste was rich and balanced. Very good roasted malt presence with more noticeable hops that I would have expected, but good nonetheless. Sweet upfront with the roasty flavors giving it a bit of a long bitter finish

D= This was a very good porter. I highly recommend it to anyone wanting a solid example of the style. Highly sessionable.

on tap into a pint glass at the Clybourn Brewpub in Chicago. pours black without highlights and a half finger of light tan head, moderate retention and light lacings.

aroma is of roasted malt mainly, with subtle chocolate and coffee notes and a lightly sweet character along with a creamy base that holds the profile together.

taste is of roasted malts again, with a sweet character and subtle grain and chocolate notes that work well with the malt. solid proportioning and a great profile make this one a notable porter.

mouthfeel is medium to full bodied with a rich and creamy texture that compliments the dark malts nicely. finishes with a wonderful creamy smoothness.

(Served in a nonic)

A- This beer pours a opaque black body that glows of brown at the base. There is a creamy tan head that last and last. There is no sign of carbonation.

S- The notes of black toasted malt and dark chocolate cocoa have hints of cream and a light tartness in the background.

M- This beer has a light airy mouthfeel with a creamy texture and an alcohol heat at the finish.

D- The temperature in Chicago is in the high 90s and this cask beer was very warm and not at proper cask temp. That was the reason for the high fusel flavors. The smooth airy mouthfeel was very nice.

The aroma is a bit lacking. Some slightly roasted malt and a bit of chocolate sweetness.

A little bit of roasted malt and some caramelized sweetness. Unfortunately I didn't find this porter to be particularly flavorful or complex. Very mild.

Light bodied, and not in a good way. Not much body with moderate carbonation. I try not to trash any beer but this was not what I want from a porter. Thats just my opinion in comparison to others I've had.

Got to drink this at the Wrigleyville Brew pub.

Was a nice dark brown with some oaky highlights and a long lasting creamy head.

Had a nice lightly burnt malt nose with a touch of chocolate.

Taste was very classic porter, light burnt malts, some hints of chocolate with a bit of coffee and just enough hops to even it out well.

Mouthfeel was nice, light and creamy.

Very drinkable, Very good porter, I wish they would bottle this instead of the oatmeal stout.

Sampled on tap at the Goose Island Clyborne location
This beer has a rich, thick, creamy, light brown head. The beer is a deep brown to black color. The dominant aroma I can pick out is of burnt raisins. The taste is creamy with a deep roast character in the finish. I get notes of toasted malts, coffee and burnt raisins. The sweetness up front is balanced by the dry roastiness in the finish. This is actually fairly light bodied and refreshingly smooth, despite the ample roastiness. When paired with my food, notes of chocolate came to dominate as the roasted notes were muted by the pairing.