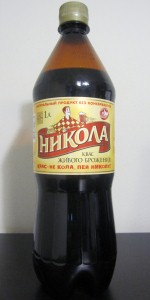 A thanks to woodychandler for this beer. Poured from a brown 1m liter bottle. Has a very dark coloa color with no head whatsoever. Smell is of dark bready grains, a bit of molasses. Taste is kind of mild, some dark rye and pumpernickel, the sweetness in the smell is not apparent in the taste. Feels light in the mouth and overall is decent.

This was part of the original Kvass Kick raid on Bell's Market in Philadelphia that set up a s**tstorm of a debate as to whether Kvass rated being on this site or not. I finally threw up my hands and awaited both the chips falling where they may and also for the dust to settle. Since both seem to have happened, I am picking up where I left off.

From the bottle: Loads of Cyrillic lettering, plus as a previous reviewer noted, the fellow toasting us in heavy winds, as evidenced by his backwards-flying tie, now sports a solid white shirt. На здоровье to you, my man!

It was flat upon pouring, but I will take the hit on that. I shared some with a buddy on Saturday night and the remainder is going to tone77, so repeated opening and closing of the bottle was probably a contributor. It is not that anyone in my circle dislikes Kvass, per se, but it can be very filling. I felt like I had eaten a loaf of rye bread by the time we finished on Saturday. Color was a deep, dark brown with limited light penetration. Nose smelled of bready chocolate, very pleasant indeed. Mouthfeel was medium and the flavor was unique to Kvass. It had a sort of milk chocolatiness, but along with a rye bite, not exactly sour, but close to it. Finish was semi-sweet and quite tasty. I can understand why it is drank as a thirst quencher and also why so many of us only need a half a glass or so. It is one of those drinks where a little can go a long way.

This poured out as a root beer colored beer. There was a thin quick fading head, no lacing or retention. The smell is earthy with some dried fruits, brown sugar and molasses. The mouthfeel was a little on the flat side... Not as much bubble as I was hoping for. Overall a decent Kvass.

Poured from 2 liter bottle into a pint glass. At my Russian food store, most kvass varieties only come in these giant bottles.

Appearance: very dark hue with a bit of ruby light allowed through. Head is minimal; it poured about half a finger and rapidly dissipated, which is not so unusual for the style.

Smell: rich, somewhat sweet, spicy aroma. You can definitely smell the rye in here. Its spiciness also reminds me of that found in a Euro strong lager, although in this case that cannot be attributed to high alcohol content. Decent for a kvass.

Taste: sweet and bready with a hint of tang right at the front which disappears quickly. Not bad, but it's a bit on the sweet side, even for the style.

Mouthfeel: light body and low carbonation. It really could be fizzier.

Overall: a mediocre kvass. I would have liked a bit less sweetness and a bit more carbonation, although the smell is good and it mostly has the right balance of flavors.

A: The pour is dark brown with a definite red highlight to it and hardly any head.

S: As with all examples of kvass I have had, it's sweet. Quite a bit of caramel and toffee with some rye and dark fruits. Interestingly, there is a light roast to it.

T: Starts off with a cola-like flavor. Lots of sweet prunes and sugar as well as caramel and bread. Just a mild rye flavor to this particular kvass.

O: Another mediocre kvass. Wouldn't have this again.

Nikola is interesting for two reasons that have nothing to do with the kvass itself.

Number one, "Nikola" is a common Russian name, but it also sounds a lot like "ne cola," which means "not cola". It was created at a time when western colas were gaining popularity and traditional kvass was declining. Deka introduced it in 2005 and promoted it as a patriotic alternative to cola with an advertising campaign emphasizing "anti-colanisation", and used the advertising slogan "Kvass - Don't Drink Cola, Drink Nikola"!

The real kicker, however, is that in 2010 the Deka brewery (which makes Nikola) was contracted by Pepsi-cola to produce their own version of kvass in Russia, "Russky Dar", which even more oddly translates to "Russian gift"... perhaps the name implies that the additional business generated by kvass was a gift to Pepsi cola from the Russian people?

With all of that said, it shouldn't be surprising that Nikola is a well-made and very clean, mainstream-style kvass. It's got just a light touch of carbonation to it; and it balances its dark-malt & molasses breadiness perfectly, leaving it flavorful and traditional tasting, but still refreshing (there's little stickiness left behind in the mouth). In additional versions it's blended with fruit juice or added flavors in a variety of flavors.

Pretty average kvass at best. Typical cola brown color with no head and virtually no carbonation in this case. Just a touch of carbonation really helps a kvass, and this one could use one. Thin, sour, with a little too little breadiness, and too much fruitiness as well as a somewhat thin metallic finish. I don't really care for this particular take on the style.

2 liter plastic bottle, best by date of 15/08/11. Served in a pint glass, the brew pours a dark ruby red/brown color that you can see through when held up to the light. Not much of any head at all, but what head is there is a tan color. Not much lacing either. Aroma is very sweet, it smells like molasses, dark bread, dark fruit, and some toffee. Taste is similar to the aroma, it tastes like dark bread, molasses, cola, dark fruit (raisins), and some caramel. Like the aroma, it tastes very sweet. Mouthfeel/body is light/medium, it's a bit thin but it's also slick with low carbonation. If you like sweet beers, then you'll probably like this. Not a bad overall brew, but it took a little while to finish the bottle myself because of the sweetness. Worth a try, it's certainly different.

Guy on the label is wearing a white shirt and tie, instead of a checker pattern... guess Kvas' image is getting more civilized these days?

Into a mug, this pours a fizzy brown with a finger of tan foam that fizzles away fast (like cola). Soon after the surface is glassy still, with zero bubbles. Some spotty lace on subsequent pours.

Despite the best by date of next year, it smells like oxidation (wet cardboard) and sweet caramelized sugar. Tastes like caramel raisin prune juice, some malty presence, rye bread is distinguishable. Some astringency, and dry in the finish. Loses carbonation quickly, and is a bit too sweet in general. Fairly easily quaffed like soda. Pretty average, probably won't seek this out again.

The Kvass Kick moves back into Mother Russia. This offering pours a clear amber-ruby topped by some tall, fizzy ecru foam. Frankly, this has one of the most steadfast heads I've yet seen on a kvass, despite its fizziness. The nose comprises rye toast, fennel, light maple syrup, pumpernickel, and a touch of burnt caramel. The taste holds notes of pumpernickel, smoky toffee, caraway seeds, black pepper, and rye bread. The body is a straight medium, with a lightly fizzy carbonation and a feel akin to Jell-O sliding through the lips (shooter-style, baby!). Overall, one of the better examples of plastic-bottle kvass I've encountered so far, but the nearly slimy feel ruins what could have been a decent drink.

A: Quite a red... More ruby like than the other, cheaper one. Head is a little richer, too... Sticks briefly, but ends up almost nothing. Okay, on topping glass, it leaves a bit of sheeting... Or at least it tried.

S: Quite light, a bit more of a 'bakery section of the grocery store' without the big, full 'bakery scent' of a full scale operation.

T: Not too shabby, a taste of rye bread, and a touch of sugary goodness. Not a sweet, watered down soda taste.

M + D: Sparkling and even dry. It isn't quite as refreshing as I hoped, but alright. I'd wouldn't reject a revisit.

Thanks to ktrillionaire for sending this beer to me. This is style No. 99 on Beer Advocate.

This came in a one liter screw-top bottle that had no English on it. As my second Kvass - the first one is not on BA but has been submitted - I really didn't know what to expect so the rating is based much more on how I liked it as opposed to rating it to style.

The beer pours a dark brown color with red highlights. There is no head but there are a few white bubbles on the surface. The aroma is a lot of sugar along with bread. The flavor has notes of rye bread, raisins, honey, sugar and Coca-Cola. A person I was drinking the beer with said it tasted like someone poured flat Coca-Cola on top of a bowl of Raisin Bran. I agree. The beer is very sweet. Low carbonation that borders on being flat and a medium mouthfeel.

Pours a dark brown with a decent looking tan had and no lacing. Smell is a good amount of sweetness with a bit of molasses and brown sugar. Taste is similar with a bit of rye. Mouthfeel is fairly thin with okay carbonation. Drinkability is on the lower side. A bit cloying and quite strange.

Does a two liter soda bottle count as a bottle? I have no idea how to rate this as this is my first, and possibly my only sample of Kvass I'll ever have.

Appearance - Pours a very dark mahogany color, almost black with a two finger tan head. Decent retention but it fades in to nothing (similar to soda) and leaves no lacing (also similar to soda.)

Nose - Smell is molasses, dark fruits, and just all around sweetness. It smells like malta if you are familiar with that. There is a sweet, multi-grain bread kind of thing going on in the background that is interesting.

Taste - Taste is... interesting? There is a weird sweetness, that same bready flavor and raisins? The flavor has moved more to pumpernickel with honey butter, like at a steak house. Still very sweet.

Mouthfeel - Medium to thin body but a surprisingly nice carbonation.

Overall - This must be an acquired taste... I'm just confused though.

Nicola Traditional from Deka Brewery
Beer rating: 75 out of 100 with 23 ratings