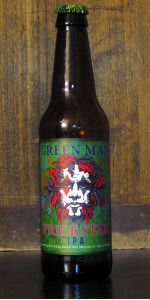 Notes: What’s this? An intriguing disguise to tempt and delight-that’s my surprise. If you crave a dank treat and others don’t lure, you’re already discovered the hoppy cure. Spiced with Simcoe, El Dorado, mosaic and the Ghost of Ted.

I got a can of this beer from my bestie from Charlotte, NC whom got it from a beer of the month club pack. It poured a slightly hazy golden with white head that is leaving some lace. The scent had apricot and stone fruit notes. The taste was nicely balanced and easy to drink with apricot, pineapple, and stone fruit presence. The mouthfeel was medium in body and had good carbonation. Overall it is a great beer.

pours hazy light golden, dense white head is sturdy
tropical notes and light dank notes fill the air
smooth lightly sweet and similar fruit hop flavor, bitterness is there, but like a ghost. light alcohol warmth in the belly
velvety but not pulpy and I love it. Classic Asheville hazy

Pours a hazy golden color one finger white head with some lace.

Aroma is fruity pineapple, lighter citrus orange/lemon mixed almost with the lightest sprinkling of pine needles. Almost smells lightly heavy in the abv mixed with the hops might be lightly dank but damn it if the brewery uses dank I want DANK.

Taste is nice backbone loaded with fruity pineapple and citrus notes mentioned above. Finish is fairly dank like earthy notes and sprinkling of pine not enough to have to want to scrap your tongue though but not bad for a fruity forward IAP. Better then the nose I must say.

Mouthfeel is good solid medium body even though the carbonation might be a touch high for my tastes.

Overall not bad fruity notes enough for the fruity people and enough bitterness for an old fart like me. Would have on draught if I saw it around just to revisit.

The aroma is sweet, like fresly peeled tangerine. Orange pith follows and turns to grapefruit, then caramel, with warmth. Hops start strong and bright only to quickly fade with slight warmth.

This is a mild IPA. In my opinion, either the bitterness or the fruitiness should be more prominent. Still, it is very tasty, and a good starter IPA. Citrus, caramel and floral flavors are all here, and the finish is very mild as it lingers.

The medium body and Jersey cotton texture work well with the soft, fine carbonation. Alcohol is well below expectations, so use caution if enjoying a second or third pour.

look - lighter yellow than a normal ipa but with a good lasting white head and pretty clear
smell - dank spiced citrus and tropical fruit (mango pineapple and grapefruit) fruity pine scent
taste - not as much greatness as the scent. more just citrus pine, not as profound fruitiness
feel - medium body and a medium light crisp carbonation
overall - ok beer. Great smell but could use more in the taste.

The perfect summer IPA! Tropical, fruity, and refreshing while still maintaining a strong hoppy flavor, a nice carbonation, and a perfect bitter bite going down. This will be in the fridge all summer!

Having on draft at Five Points Public House in Albemarle, NC

Look: The Trickster has a golden yellow hue that runs hazy on the initial pour. Slight foamy head leads to nice lacing as the beer goes does.

Smell: To be a 7 percenter, at first smell the beer smells more stronger and more dank than it ends up being. You get a aroma of pineapple, mango and grapefruit, due to the combination of hops involved.

Taste: You get a decent amount of the fruit flavors i mentioned upfront, with the mix of the dank hops, maybe even some citrus involved. Finish feels more malty/bready on the backend, with the fruitiness getting less as the beer warms and feels more muted.

Feel: Boasts some moderate carbonation but this beer, like most hazy-esque IPAs I’ve had, seems to go down very smooth, making them easy to drink.

Overall: Honestly, it’s been a long while since I’ve had a Green Man offering (at least two years). With this new kick of hazy IPAs being a niche, this is one of the better ones I’ve had of the style, though I’m still not the biggest fan. I would have again if I saw it. Would be a good spring/summer offering and I’m intrigued enough to try one of the other versions of it.

Trickster IPA from Green Man Brewery
Beer rating: 89 out of 100 with 141 ratings