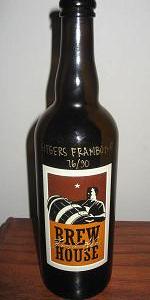 Notes: Base beer fermented with brewer's yeast. Racked to second-use wine barrels and added a blend of brettanomyces, lactobacillus, and pediococcus. The beer sat in barrels for 2 years. Racked onto raspberries in a stainless steel where it sat for another 8 months.
View: Beers | Place Reviews
Reviews: 13 | Ratings: 45 | Log in to view all ratings and sort

Finally opened this one on thanksgiving after it had been sitting in the fridge since purchasing it back in June. Poured a bright and beautiful shade of red. Big fruity nose on this this one. I get nothing but raspberries. Taste was more of the same, with a nice combination of tart and sweet. It definitely tasted like this one spent a fair amount of time in a barrel. Carbonation was perfect, I was worried that it may have gone flat sitting, but my worries were unfounded. This was a great beer even @ $20 a bottle it was totally worth it. Would buy and drink again in a heartbeat.

Aroma is straight raspberry. Fresh raspberry at that. Nice notes of the herbal quality of raspberry leaves as well. A touch of acetic sourness on the nose, as well as the faintest touch of woody funk.

A nice medium body starts of with strong lactic sour notes, which slowly, slowly, and sourly, lead the way to delicate raspberry sweetness. The lactic sourness is really the king here, though. It comes in groves, leaving the tongue dry and puckered til the raspberry takes over at the very end. Faint notes of herby, woody, funk are present here, a product of the barrels and aged hops, I assume.

Overall this is a really nice framboise. I love the effort Fitger's put into this, and it shines through in the final product. I personally love the level of sourness, but I think for the style, I'm looking for just a touch more raspberry flavor in the notes. I feel most of it was fermented away, leaving it quite dry and sour. Overall, though, I'm diggin' it.

Thanks Jeff for sharing this one!

Reddish orange amber color, some initial froth and foam that sticks around the edges a little.

2016 bottled version. 127/260. Raspberry color has fades a bit but still a lot of raspberry seeds with some tartness. Held up well for being 5 years old.

Poured from 750ml corked and caged into Globe glass.

S. Tart raspberries. Oaky and earthy underneath. Has a pretty big sour component.

T. First is tart raspberries, and cherry. Finishes with a smooth oakiness. Pretty interesting beer. Has quite a bit of sourness, but not overpowering. The raspberry flavor is also not too overpowering. Get a little bit of the brett yeast flavor on the back of the tongue.

O. Pretty impressed actually. Has a lot of nice barrel aged sour characteristics going on. The addition of the raspberry is a benefit to the beer. Nice balance of the sour, tart, and oaky flavors contained within this brew.

I have had this beer before and I am pretty sure that my ratings would have been higher if I reviewed that sample. My buddy also agreed, so there is some bottle variation going on. Off to notes:

Rust-pink-brown with a light pink head and good clarity. Smells like a true Frmaboise and could easily compete with most that I have had when it comes to aroma --- old raspberry acid (whatever it means) and funk. Taste (of this sample) is not quite there --- a little too woody and somewhat acetic too which is an instant minus in my book. Mouthfeel, however, is spot on.

Big thanks goes out to MBrausen for picking this one up for me and shipping it to me after I bought it over the phone. Thanks buddy! Shared during BRoss242’s send-off party before he moves! Will miss you man! Bottle #305 of 408! Served from bottle into a Mikkeller taster flute. Poured red-orange with a half finger white head that subsided to a minimal amount slowly. Maintained decent lacing throughout the glass. The aroma was comprised of sweet malt, raspberry, cherry, and tart. The flavor was of sweet malt, raspberry, tart, earth, and cherry. It had a light feel on the palate with high carbonation. Overall this was a good brew. MBrausen told me about this one while I was still laid up from my accident and I knew I had to jump on it. I’m really glad that I did. A very nice Framboise that was fairly spot-on for the style. Not as sweet as some as I have had in the past which was a nice change that allowed the fruit to carry throughout without interruption. This made it very easy to drink and quite enjoyable. Definitely worth trying or seeking out if you have not done so already as Brew House has a winner here.

Into snifter... At the Brewhouse.

Pours a rosewater ruby. Slightly cloudy with a one finger white head.

Moderate carbonation, crisp and acidic finish with bitter acidic aftertaste. This beer is a flavor delivery vehicle that allows the consumer to ride each sip for minutes. Delicious and drinkable. Highly recommended!

Poured on tap at Fitger's into a 10oz snifter.

T. Tastes of sweet raspberries, tart cherries, and a bit of sour grapefruit with a hint of orange.

O. A very good beer, lots of depth, lots of flavor. I feel like in a few years this beer would pop and be just amazing. A little time to mellow and change. A very good beer. I can't wait to crack one of the bottles I picked up.

Bottle #27/90 shared by Jon (WeeheavySD) at Woodshop 5.0. Thanks! The beer appears reddish pink with a one finger fizzy white head. I tried this immediately after Gargamel and was surprised to find more fruit in this. Tart raspberry skins and flesh accompany notes of wood, vanilla, and lactic character in the nose. The flavor is of tart raspberries and a clean lactic sourness. Oak is noticeable midpalate and the beer is moderately tart with a tannic fruity finish. The fruit is expressive. Very good.

A - Reddish brown and cloudy. Low forming head with tight bubbles that quickly dissipates. I had considerable trouble removing the cork so I was worried that this beer would be dead flat. Even the low carbonation was a relief.

T - Wow. Earthy Brett that doesn't go as far as the strong barnyard/horse blanket I've tasted in some. Brett is a little less noticeable than in a Boon Kriek. Raspberries meld very well with the Brett and lacto notes in that it's hard to distinguish what flavors are a result of the wild yeasts and which are from the raspberries. Mild sweet malt flavor keeps this beer from being too sour. Brett and raspberries linger in the aftertaste.

M - Light body. Even with the low carbonation, the sourness packs enough of a punch to lend a dry, crisp finish. Very refreshing beer that I could (and did) sip on all night.

D - The best framboise I have had yet to date. I shared this beer at my homebrew club's hoiday party, which made the experience even more special. I'm bending the rules a little in that I'm not reviewing this beer as I'm tasting it, but given the ultra-limited release I wanted to document my thoughts on this beer before I had forgotten.

Did the novelty of the once in a lifetime opportunity influence my thoughts on the beer? Probably, which is why for the numbers I rated it a little harsher than my notes warranted. But if I see Fitger's releasing another lambic, I'll definitely try to buy some.

A: nice, deep reddish brown color
S: sour nose is evident but not the traditional, acetic acid Cantillon style, a bit sweeter
T: nice sour taste with quality leaning more to the musty side than sharp, pucker quality of the framboises of (Cantillon, De Ranke, etc.), a touch of sweetness but not distracting, also not as lively on the tongue as a traditional lambic
M: nice and drinkable
D: good but not as refreshing as the more sour styles

Framboise from Fitger's Brewhouse
Beer rating: 92 out of 100 with 45 ratings