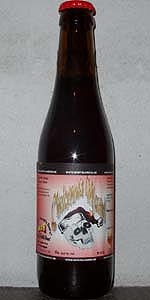 Poured a dark murky brown with very little head. Smells of dark fruit, cinnamon, and nutmeg, very spiced. Taste is spicy, with brown apple, nutmeg, cinnamon coming through. I rather like that in a Christmas ale. It has a very light mouthfeel, in part because all the carbonation has gone south. One is drinkable, I would not seek out another.

I picked up a bottle at a great little bottle shop in Arlon, Belgium and had it around Christmas.

12 oz bottle. The beer poured a shiney copper color with no real head to speak of, just a little lacing on the glass. The aroma was a bit scotchy and sweet. The taste was slightly smokey and also a bit sweet with nice citrus notes as well. Overall a solid Christmas beer that is pretty drinkable.

Presentation: Sampled during an organized Brewery Visit to Brasserie Mortals Beers on Sunday 16th April, 2006. A stash of old 750ml corked Bottles were cracked open and made available in the adjoining Bar and Restaurant which opens to the public once a week on Sundays 11am  9pm.


Appearance: Ruddy dark chestnut, cloudy hue with a sludge like appearance that may have been thanks to the sharing of a few 750ml bottles, even so I didnt note any clear examples even from the initial pours from new bottles. Head came and went faster than the 25th December. Limp looking murky brew that seemed to warn the potential imbiber that it could, well, have repercussions later, if you know what I mean.

Nose: Nice nose, despite the funny looks. Lots of spices in here, and some herbal traits sit neatly against the malts. All spice, nutmeg and cinnamon seem to leap out in preference to others. Sweet malts, not sugary just sweet. The best part of this brew.

Taste: Sweet start, lots of spices fight with the malts in the background. Roasted dimension in the middle feels quite nice but is far too short lived. Sweet, very spicy and a tad muddled, too much is going on. Too many spices, or at the very least it could be said that there is nothing to balance them.

Mouthfeel: Off-putting. Sandy and dry but sweet at the same time. Alcohol comes through with candy sugars right in the lingering finish. Sweet malty feel with lots of Spices all over the place, feels like you should be picking them out of your teeth.

Drinkability: Too sludgy and a little unrefined. Far too many spices, its mixed up and a too messy to appeal. Even though it was the last brew I sampled, I still ended up leaving some of my glass.

Overall: A disappointing Xmas brew. I was going to invest in a 750ml bottle to bring back Stateside, so glad I didnt now. Maybe it needs time but it just seems to be like far too much all at once and far too heavily spiced.

Poors in without much head and what's there quickly dissappears. Dark amber beercollor and very clear with a carefull poor in. Nose is lots of clove, cinnamon and other spice and next to that some sweet caramellic maltyness aswell as litle roast. Taste is also quiet spiced and far from your "regular" beertaste cause of all these herbs but has fine and sweet taste. This hides alcohol well and malts are mostly found in the roasty aftertaste and sweetness. Candynote also there and all together well balanced brew except for the spicyness and sweetness. Well drinkable brew especially if you like it spiced, strong and sweet.