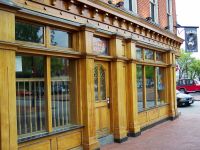 Reviewed by sreichgott from Pennsylvania

4.52/5  rDev +0.7%
vibe: 4 | quality: 4.75 | service: 4 | selection: 5
Not a huge place, there is good-size bar then some communal high-top tables and other seating. Has the feel of a sports bar or upscale dive bar, but with amazing beer selection. Huge draft list, with the localish beers highlighted. wide variety of styles. bottle selections as well, lots of limited stuff.
Jan 27, 2018
Rated: 4.71 by BFCarr from New Jersey

Reviewed by BJB13 from Maryland

4.64/5  rDev +3.3%
vibe: 4 | quality: 4.5 | service: 4.75 | selection: 5
Spent nine hours here on a Saturday with a couple of other BA members from out of town. Time flew by as we tasted and compared beers with some dinner and plenty of conversation. We were there until 12:30 which gave us an hour or two of overlap with the Saturday night party crowd.

Food was good and the service was excellent, we never had a problem getting prompt service regardless of whether we were ordering draft pours, from the bottle list or food. Selection was about as good as it gets, while there are obviously plenty of beers they don't have I can't imagine ever running out of new things to try while you are there. I even knocked a few things of off my current list.

I had not been there in over fifteen years. I won't make that mistake again, though I may drink one or two less beers and leave a little earlier.

Reviewed by jsb89 from Maryland

A large group of us decided to enjoy some casual drinks here on a Saturday night for a friend’s birthday. We were all let into the bar by the bouncers with no issue. One of us (who happens to be gay) stepped out to smoke a cigarette, and when he attempted to reenter he was asked for his ID. After providing his ID, our friend was denied reentry to the bar, with the rationale being something along the lines of “you’re too drunk.” Okay. Totally understandable.

Moments later, another member of our group left the bar and overheard the bouncer say to his colleague, “I wasn’t about to let that gay guy in!”

With six years in the service industry under my belt, I completely understand denying someone initial entry into your establishment because they are too intoxicated. Guests cannot be allowed to pose a danger to themselves or other guests. However, I understand it less when someone has already entered the establishment five minutes previously, has caused no trouble inside and is entirely coherent, and then attempts to reenter. I draw the line at denying someone entry because of their sexual orientation (or race, gender, religion, etc.).

With so many establishments to choose from in Fells Point, I see no reason to return to Max’s and drop another $100.00 only to hear about nonsense like this. Somehow, I think I’ll be able to find a bar that, at the very least, can hire bouncers that just do their very important job while keeping their personal opinions to themselves.

4.94/5  rDev +10%
vibe: 4.5 | quality: 5 | service: 5 | selection: 5
Rivals Mekong for taps (over 70) and bottles list. Super knowledgeable and attentive bartenders. Classic rock on the radio. Friendly patrons who liked to talk about beer. Didn't eat anything but menu looks like standard pub grub. Beer is a little on the pricy side, but you can get 5oz pours and there is a special on a couple different drafts every day. Can't wait to go back!
May 11, 2017
Rated: 4.59 by Newport_beerguy from Rhode Island

4.25/5  rDev -5.3%
vibe: 3.75 | quality: 4.25 | service: 4.5 | selection: 4.5 | food: 3.5
Finally, I made it to the famous Max's. Good location. Somewhat grungy atmosphere, which I prefer, but seems like it could turn into a nightmare during sporting events or busy hours. I went at lunch time and there were only a few other people there, which worked out good for me, as I had my little daughter / travel buddy along for lunch, before our trip to the Aquarium (which is only about a mile's drive away). Tons of crazy crap on the walls, breweriana and whatnot.

The beer selection was top notch as expected, with a wide variety of styles from many breweries on tap, and lots in bottles too. There was a massive lambic/sour ale bottle sale event a few days after my visit, which I unfortunately could not attend, but it looked insane. When I was there, I didn't have anything that nuts, just a few samplers of brews that I hadn't had yet, including one from Manor Hill, which was seemingly the featured brewery of the day, with 10 or more on tap just from them.

The service was fine...hard not to be with only a few people in the place (although I've had bad service in those situations elsewhere). The bartender was friendly and accommodating to myself and the tot, and the food came out quickly. I wasn't too impressed with the menu, but it was fine for a snack. Basic pub grub mainly. I had a quesadilla--can't really go wrong with that--and I got some sliders for the kiddo, which for a youngster was okay, but for an adult would have been pretty disappointing.

I can see this definitely being the major hub for craft beer in Baltimore, and I'd like to go back some day soon.

4.81/5  rDev +7.1%
vibe: 4.75 | quality: 5 | service: 4.75 | selection: 5 | food: 4
Stopped by when I was visiting Baltimore. Phenomenal experience. Unbelievable tap list and equally great bottle list. Had a Rodenbach Alexander on tap. Great locals and Belgians. Friendly and professional service. Nonjudgmental for the non beer snobs in the bar. Typical food-bar fare. Overall a great experience and I will return the next time I'm in town.
Mar 22, 2017
Rated: 3.61 by StoutLover14 from Illinois

Rated by Hop-Dawwg from Florida

4.44/5  rDev -1.1%
vibe: 4 | quality: 4.75 | service: 4.5 | selection: 4.75 | food: 3
Was there during the early afternoon on a weekday. Had the entire place to ourselves besides for one other couple seated down the bar. The bartender was very nice and gave good recommendations. I really really really like that they do smaller pours on all the beers. Helps when you're feeling full or need to drive later but still want to try something new. Wonderful selection of beers, with lots of German stuff. Food is average.
Oct 20, 2016

Old facade. Pretty-looking, but unexceptional for the area. The building is bricky and cavernous, with a decent amount of beer schwag and regular bar decor. Nothing too great about it.

The beer is great, though. One of the five or so best tap lists I've ever seen. The selection is gigantic and well-curated, although it does tend toward whatever styles are trending within beer geek communities. When I last visited I think there was maybe one solitary pilsener available? So they don't got a beer for every mood, necessarily, but they do get in a ton of rares and one-offs, frequent tap takeovers, a stellar rotation of Belgians, and a dedicated Rodenbach tap.

The vibe is usually quiet, like a beer bar. NFL Sundays are loud and packed, but the crowd is convivial and more or less respectful. They also have great specials on gigantic pours during games.

The food is standard pub fare. There's better dining options surrounding the place. But nothing touches the beer.

So, overall, I don't know if I'd say Max's is *quite* in the "World Class" category, like with Mekong, Map Room, or Falling Rock. The vibe is just a bit too plain for me. But it's still an excellent beer destination.

4.53/5  rDev +0.9%
vibe: 4.5 | quality: 4.75 | service: 4.25 | selection: 4.75 | food: 4
The place was packed with beer geeks on a Thursday night, of course there was a convention of us in town. Old wooden bar spanning most of the right wall of the place. Tables to the left and in back. Huge tap list and I hear the bottle list is even better, but I never got past the taps. bomb! and parabola on tap and a hundred of their friends. I had a chicken sandwich that was messy but tasty. Service was pretty good for how busy it was. It is a bit pricey, but you get what you pay for I guess. I'd go back in a heartbeat.
Jun 25, 2016
Rated: 4.56 by StoutSnob40 from California

Reviewed by FSUlaw-and-brew from Florida

4.97/5  rDev +10.7%
vibe: 4.75 | quality: 5 | service: 5 | selection: 5
Went to Max's 4 nights in a row when I was visting.
The vibe was great, looks similar to a college style bar, but you know its a serious beer bar
quality was on par with some of the best bars I've ever been to, 102 taps plus hundred and hundreds of beers in the bottle, that you can take with. When I was there they had one bottle of Madagascar left. Service was also awesome, they never let a glass of water or beer get close to empty, and the last night I came, three bartenders said hello, shook my hand, all remembered my name, and one started a tab for me immediately, with first and last name. Awesome place, if I could come back to Maryland just for Max's I would.

Reviewed by Lettsgo3 from Maryland